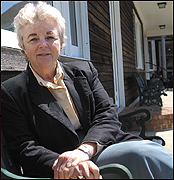 EASTHAM - As townspeople poured into the auditorium at Nauset Regional High School for Town Meeting on May 2, everyone could already tell that this would be like no other meeting in recent memory.

And it certainly was a meeting to remember, particularly for Town Moderator Gwen Pelletier, 64, who stood at the podium for only the second time. The first time was at an anemic special Town Meeting last December, a far cry from the filled-to-the-brim crowd a couple of weeks ago.

"It was a challenge to say the least, starting with the capacity crowd," said Pelletier. "It kept me on my toes."

It was clear that the large crowd was due to Article 18, a contentious issue regarding a required conservation restriction for the ocean beach project. But despite emotions running high, a hot and stuffy auditorium and the large crowd, Pelletier believes things went relatively smoothly.

"It was a breeze through the first 17 articles," said Pelletier, who has lived on the Cape for more than 30 years. "I was amazed by the lack of discussion. Article 18 was a challenge. It certainly tested my knowledge of parliamentary procedure. But I feel good about how I did."

She feels so confident and enjoys the position so much that she is running for the post for to fill a full, three-year term. Granted, she is running unopposed, but Pelletier is confident that the town has confidence in her abilities. She was first elected to the post on the floor at special Town Meeting in December, after then-moderator Tom Newton moved out of town and resigned. She eked out a victory over Hank Curtis by nine votes.

Pelletier sees her new role as moderator as an extension of her belief in providing service to the community. Pelletier worked for a variety of not-for-profits over the years, most recently the Lower Cape Cod Community Development Corporation, where she has been for 10 years. Prior to her work in the non-profit world, Pelletier worked as a teacher in her native North Carolina, as a reporter for the Cape Cod Chronicle and served with her husband, Roland, as a Peace Corps volunteer in Guyana and Grenada in the early 1970s

In 1971, Pelletier gave birth to her son, Traven, while in Grenada. She and her husband returned to Grenada after Traven graduated from high school in the early 1990s. That time she worked as the associate director for the Peace Corps and was in charge of all programs in Grenada.

Throughout her work and life, Pelletier spoke frequently on a variety of issues, sometimes from the floor of Town Meeting. But that will no longer be an option.

"Before I accepted the position I did think, 'Oh my, I can't speak on this or that issue'," said Pelletier. "People must feel that the moderator can, at the podium, be fair. I think that a moderator can have an opinion, but not express it at town meeting."

Pelletier also said that in a town as small as Eastham, it would be near impossible not to have an opinion on the issues. And any worry that she had about her inability to speak on the issues is less of an issue.

"It was truly an interesting debate at town meeting," said Pelletier. "And there were people who said what I would have said."

Looking back at the meeting Pelletier said that she had planned to introduce herself as well as the board of selectmen and the finance committee, but the meeting started a half hour late, so she had to jump right into it. Pelletier was just glad that with the help of the police and fire chiefs they were able to hold the meeting without having to adjourn to move the meeting to another date and a larger location.

Pelletier sees some things in the future of Town Meeting skating between being a breeze and a challenge; it all depends on the issues and the number of people.

"I really look forward to continuing as moderator, I really do," said Pelletier, who hopes, but knows, that not every town meeting will be so well attended. "Sometimes the challenge may be how do we get a quorum!"

This story has been posted in the following forums: : Headlines; COS - Guyana; COS - Grenada; Country directors - Grenada; City Government