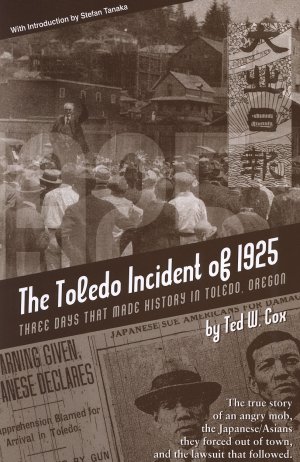 Corvallis author and historian Ted Cox's new book, The Toledo Incident of 1925, is the true story of tempestuous days in the Oregon coastal village, when an angry mob forced Japanese American mill-workers to leave their homes and return to the Willamette Valley. Cox will read from the book at 7 pm on May 5 in Tsunami Books. Free.

Cox's book is a thoroughly researched, deftly penned tale of the expulsion of the workers from their homes. The legal precedence set by a successful civil lawsuit filed against the mob leaders adds a significant page to the history of race relations in the Pacific Northwest.

Cox first learned of the anti-Japanese incident 25 years ago from his 95-year old friend, Roy Green, who was 15 years old in 1925. Green told Cox his dad was so disgusted with the mob's intentions he took his boys fishing.

Intrigued by what was a significant yet untold story, Cox decided in 2003 to tell the story. He conducted research at the Lincoln County Historical Society Museum, the Toledo History Center and the Oregon Nikkei Legacy Center in Portland. He pored over newspaper clippings and interviewed people on all sides of the incident, including descendants of those involved.

The result is a lively narrative, lavishly illustrated with photos of Toledo, pictures of some of the people who lived there, the large lumber mill that had hired the Japanese American workers, their housing along Tokyo Slough, and the site of the confrontation. The drama began with anger over job displacement by foreign out-of-towners, boiled over into vigilante action, led to a frightening displacement at the edge of violence and ended with mob leaders slipping out of town under the shadow of disgrace and an inability to pay damages.

Cox includes articles from Japanese newspapers (in Japanese and translated into English), which followed the harrowing chronicle as it unfolded across the Pacific. The book includes appendices on Japanese immigration to the U.S., the history of Japanese laborers in Oregon's sawmills, the founding of the Japanese Association, and civil rights issues for Japanese resident aliens tempered by the verdict of the Toledo lawsuit. The book closes with biographies of a few of the participants.

A native of Eugene, Cox owns and operates the Old World Deli in downtown Corvallis. He earned a masters in education from OSU, has taught in Africa and Central America as a Peace Corps volunteer, and has studied Northwest Native American history. He's writing a biography of Roy Green and The Butter Tub Book: A History of Wooden Butter Tubs in America.

Cox will also read from The Toledo Incident at the Corvallis Public Library at 7 pm on May 12 and at noon on May 16 in the Asian Pacific Heritage Room, at OSU. The book can be ordered from the author at: www.oldworldpublications.com