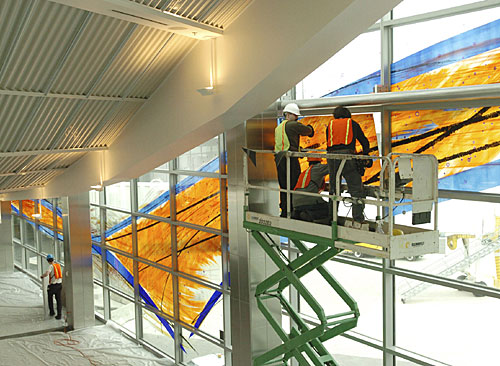 Stained-glass artist Guy Kemper lights the way for passengers at BWI's newest terminal with a magnificent swath of color.

Caption: Kneeling on a scaffold at BWI's new Southwest terminal, Guy Kemper fits a panel of his glasswork with help from Jason Klein (left) and John Mulkins. Sun photo by David Hobby

When travelers descend by escalator into Baltimore-Washington International Airport's new Southwest Airlines terminal, they will see a brilliant orange and blue ribbon of translucent stained glass shimmering in the window beside them.

The glass seems to flutter and flow like a giant bird's wing, an undulating, 110-foot-long lick of sky blue and saffron that points toward the waiting area below.

That's precisely the effect Guy Kemper, the 46-year-old artist who created Celestial Passage, hoped to achieve in the artwork that will be unveiled today as part of the airport's $264 million addition. Celestial Passage is both a subtle traffic sign for rushed and harried travelers and a whimsical expression of the ideal of flight for those who will be airborne shortly themselves.

"My inclination was to think in terms of some kind of very futuristic space voyage or cosmic travel," says Kemper, a compact, wiry man with a full beard and piercing blue eyes. "To me, the orange is celestial because it's like the sun, and the little violet dots in it are like planets."

The Lexington, Ky., resident may not be a household name yet, but his large, stained-glass public artworks can be seen around the country, from the chapel windows of St. Agnes Convent in Fond du Lac, Wis., and the Jewish Heart and Lung Center in Louisville, Ky., to the chapel windows of the Church of the Resurrection near Columbus, Ohio, and the panoramic glass mural at Orlando International Airport in Florida. And, next week, he will begin installing another work in St. Joseph Chapel, the Catholic Memorial at Ground Zero in Manhattan.

The New York piece, titled Rise, is a sweeping abstract design in bold strokes of red and yellow glass that resemble the petals of a flower or the flight of the mythical Phoenix and will frame the chapel's entrance.

"It's a striking portal, like the Arc de Triomphe or the monument in Washington Square Park," says Larry Hoy, the liturgical designer at the Ground Zero site who brought Kemper into the project.

"It's a glass version of that kind of archway, and it speaks of death and resurrection in the same breath because it looks like it could be either an explosion or a beautiful flower. It's a very powerful piece."

Kemper was well aware of the gravity of the project.

"Obviously, a piece for Ground Zero has to have a certain power and meaning," he says. "But it also has to be a beautiful architectural ornament - I designed it to respond to the light and the space."

Airport authorities at BWI commissioned Kemper to create Celestial Passage as an "architectural enhancement" - contemporary buzzwords for artistic pieces that break up the monotony of public spaces. Unlike a painting in a museum, an artwork in a public space must fit in with its surroundings while simultaneously standing out. Kemper's piece works because of the traveler's own movement on the escalator: As the stairs descend, the bright orange and blue swashes of color also seem to move - toward the sky.

Kemper began work on the BWI project by studying the building's architectural plans. Then he made a to-scale model of the terminal in his studio - a replica big enough for him to peer inside and detailed enough for him to envision the interior from the perspective of someone walking through it.

"I tried to visualize every aspect of the building, including its psychological effect on the people using it," Kemper explains. "What I have found is that a space will actually tell you what it wants if you listen carefully. If you're quiet, the space will speak to you in terms of composition, palette and gesture - all these things will be sort of whispered in your ear if you're listening."

It took Kemper three weeks to make the model. Then he spent two more weeks studying it. "I was visualizing the carpet, the walls, the windows, everything," he recalls. He tried to take into account the likelihood that passengers waiting to board airplanes likely would have more time to look at the piece than those who were arriving. The latter usually just want to get home.

"Finally, I sat down and started to paint, and it's as if the whole piece just came right out of my brush," Kemper recalls. "I'm a very spontaneous sort of person, and that's the way my work is. ... It's not about intellect or rational response. It's really about this thing from the heart and an emotional, gestural sort of energy."

Kemper's path to becoming an artist in stained glass was meandering to say the least. Though his family is originally from the Eastern Shore, Kemper and his siblings were born in Louisville.

The artist majored in soil and plant science at the University of Kentucky, then joined the Peace Corps, which sent him to the West African nation of Sierra Leone to work in the rice paddies. But he contracted malaria a few months later and had to come home, where he spent several months recovering.

Next he found a job at an environmental engineering firm that specialized in industrial waste cleanups. But he soon quit to work on a tobacco, hay and cattle farm owned by a friend.

In 1984, with $2,000 in savings, Kemper rented a storefront in Lexington, and opened his own business making and repairing stained glass windows. "I thought [the business] would probably fail when I started it," Kemper recalls. "But then I thought, 'What do I have to lose, really?'"

Why stained glass? As Kemper tells it, he had always been interested in art, but never thought he could make a living at it. Stained glass offered a way to work with the basic elements of light and color and still pay his bills.

"Glass is such a mystical and seductive material," he says, "but what I really love working with is light. I call it painting with light because the most exciting thing to me is the interaction of light in space; glass is what does that."

In college he had taken studio classes in painting and several art history courses (he also briefly considered a theatrical career). And since childhood he has loved to draw and paint. "I'd paint little watercolors and things," Kemper says, "but I didn't take it that seriously. Mostly I was a craftsman who liked to carve wood and things like that."

Eventually Kemper began creating stained glass works for churches, hospitals and libraries. In 2000, he won the commission for the Orlando airport window, his first large project, and for that he traveled to Germany to consult with Wilhelm Derix, one of the world's leading glass fabricators. Their encounter proved a turning point in Kemper's career.

"Wilhelm and I really saw eye-to-eye," Kemper recalls. "He only wants to do the most beautiful work; money was secondary. For him, beauty is the primary issue, which has always been my attitude, too."

For the BWI piece, Kemper created the design and sent it to Derix's studio. There, master craftsmen realized the concept by etching sheets of laminated, hand-blown glass with acid, treating them with enamel paints and refiring the glass in kilns to reproduce every detail of the original painting.

"That's why this is the most expensive glass in the world, as well as the most beautiful," Kemper says. "You can't get these effects by painting a normal sheet of glass. These materials have a texture and a kind of internal light that is unique to hand-blown glass."

Kemper feels his partnership with Derix's studio has allowed him to realize his potential as a painter and an artist. "I still can't paint very realistically," he admits. "I'm better at drawing, but only enough to make a living.

"What I do have is a knack for knowing what the space is asking," Kemper concludes. "Most artists are narcissists - they do their own thing and make the space conform to their vision. I am the opposite. I live in the space and try to conform myself to what it wants."

This story has been posted in the following forums: : Headlines; COS - Sierra Leone; Art; Stained Glass