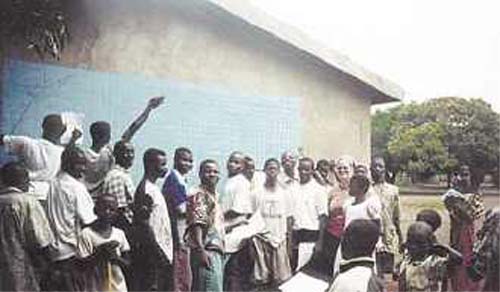 Caption: Hersheys Colleen Sheridan with students of a school in Ivory Coast, Africa. Sheridan helped the students create a world map on their school building as part of her trip with the Peace Corps.

Read and comment on this story from the Houston Chronicle on Colleen Sheridan who traveled to various villages in the Ivory Coast as a health education volunteer. She and her group taught villagers about nutrition and HIV/AIDS prevention, distributing condoms to help slow the spread of the sexually transmitted disease, which has become an epidemic in Africa. Read the story at:

Home away from home*


Home away from home

Many people may not realize that Hershey isn't the only place with such a sweet scent. Residents of Africa's Ivory Coast, one of Hershey Foods' biggest cocoa suppliers, often notice the same smell wafting through the streets. At times, the two areas' socioeconomic differences may make the distance between them seem as far as the moon. However, one woman is seeking to bridge that gap.

Colleen Sheridan, a longtime Hershey resident and graduate of Hershey High School, recently returned from a 21-month stay in Ivory Coast as a member of the Peace Corps.

While in the country, which is located on the west coast of Africa, Sheridan traveled to various villages as a health education volunteer. She and her group taught villagers about nutrition and HIV/AIDS prevention, distributing condoms to help slow the spread of the sexually transmitted disease, which has become an epidemic in Africa.

"Someday, I would really like to work in social services with developing countries," Sheridan said. Her work gave her the valuable field experience that many social service jobs require, she said, as well as the ability to learn a new language.

Besides teaching basic health care, Sheridan and her group also worked to send more girls to high school. In rural villages, one family's yearly income can be less than $50. To save money, girls are often denied an education. Sheridan's group established five scholarships that will eventually contribute to higher education for females.

Her visit was cut short when the Peace Corps members stationed in the Ivory Coast were evacuated because of a rebel coup d'etat that began in September. The government was unable to retaliate because of a cease-fire, and Sheridan was pulled out of the country for her own safety. She spent the remainder of her stay travelling to other African countries.

"Different countries live very differently," Sheridan said, recalling that even with its extreme poverty level, the Ivory Coast was much more developed that many countries she visited. "[In Ivory Coast], people generally had clothes and food," she said, while in other places, "the people were scrounging every day just to survive."

Upon returning to Pennsylvania, Sheridan immediately noticed the difference between Africa and the United States. "I've been freezing cold every day," she joked, noting that while Africa's climate ranges from hot and humid to hot and dry, it rarely gets cold and never snows.

On a more serious note, Sheridan also noticed an extensive difference in the two countries' economic levels. "There's a lot of excess in [the US]," she said. "We buy and produce so much, which you can tell just by going shopping at the mall." However, she admits that "it's nice to have access to some luxuries."

While she did experience some culture shock when she arrived in Africa, Sheridan did see a few things that reminded her of Hershey. Villagers where she was stationed received packages from students in April Morocco's French classes at Hershey High School.

Sheridan also noticed a familiar smell wafting through the streets. "The Ivory Coast is the largest producer of cocoa in the world," she pointed out. "As I walked outside, I thought 'this smells like home!'"

"Many people here don't understand the situation [in Ivory Coast]," Sheridan said, "which is unusual because they are so connected to Hershey [through the chocolate industry]."

Now that she has returned, Sheridan plans to continue volunteering and to attend graduate school to attain her master's degree in public health.

In the future she hopes to find a job that will allow her to travel back to Africa. More about Peace Corps Volunteers who have served in the Ivory Coast

Read more about Peace Corps Volunteers who have served in the Ivory Coast at:

I wish to apply AS A VOLUNTEER [PUBLIC RELATIONS/MARKETING OFFICER] FOR ORGANISATION in your Organisation. I hold Bachelor of science degree BSc (Hons) in Marketing from the Trinity College, Spain.I had had experience in the field of marketing and Communications while studying in the institution,and I am also fluent in English and French Languages,and moreso,a Computer literate.

I believe I can contribute to the growth and development of the Organisation .

I will be glad if this application is favourably considered.

N.B; Below is my CURRICULUM VITAE.

POSITION HELD; PRESENTER- [BE MY GUEST] AN ENGLISH PROGRAMME

were the heel is climate of africa