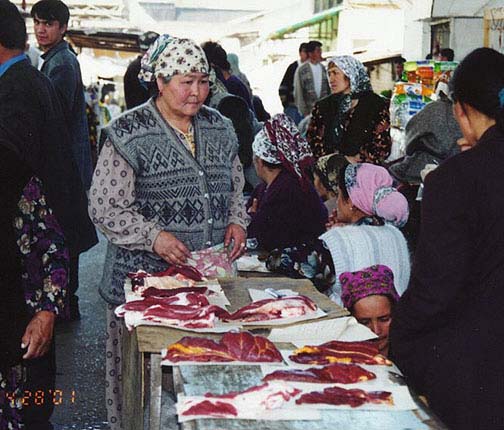 Virginity is a cherished thing here, perhaps to the extreme. And if it werenĺt for the fact that ôinfidelityö (with a perverted smile) is about the second thing mentioned after ômy name isůö with every cabby I meet, I would say sex is taboo too - maybe just for the girls. Sex education is unheard of: a conservative form of sex-ed was lobbied by the Minister of Health, two years ago, who suggested it become a part of upper class curriculum. He was promptly chastised and terminated. Itĺs no surprise that NGOĺs are growing concerned about the threat of AIDS in this country that, not long ago, claimed less than one-hundred cases. The numbers are growing, but they are intangible now: every year hundreds of thousands (about 30% of Kyrgyzstanĺs working population) of people leave Kyrgyzstan to work in Russia, where the AIDS epidemic is swelling faster than any other country on earth. Particularly hit hard is the Siberian region from Novosibirsk to Irkutsk, where most Kyrgyz find their work. Most work nine months out of the year then return, mostly men, to young wives and children. The cycle continues; and we begin to understand the cause for concern.

But this entry isnĺt about AIDS, itĺs about education, or the lack of it: sex, development, reproduction. Where did we learn about this stuff? In school, maybe; the birds and the beeĺs talk, probably not; TV? For me it was the illuminating candor, and fleshly endearing characters, of ôWhere did I Come From?ö and ôWhatĺs Happening to Meö Egregiously overlooked for the New Yorkerĺs Hundred best books of the 20th Century. I wish I could find these books in Russian and Kyrgyz, for as basic as they are they could shed a lot of light on the pervading ignorance.

ůsounds culturally insensitive, I know. Iĺve been defending this a lot lately, and again it comes back to oppressing women, take for instance a brides first sexual encounter in Kyrgyzstan ů

Many first time encounters for young Kyrgyz women occur after they are, for better or worse, kidnapped by a man and taken to a room they have never seen before. After the routine celebration with friends and extended family there is a private time. A time for the woman, now made to be wife, and husband to consummate the marriage. But since the woman often knows nothing of what to do or expect, and even the man is sometimes unaware of what to do (arenĺt we all ľ actually, to their credit, many young Kyrgyz men respect the purity of the Kyrgyz girl), our private time now becomes a time for the mother-in-law, sister-in-law, aunt-in-law, etc. The older married women, who are often the protagonists of nonconsensual marriage now take on the role of ôfacilitators.ö From the same room where a stolen girl lie, crying on her back, our ôfacilitatorsö reflect on their own experiences to get the new bride through the act. When the act is through, all witnesses wait to see if the stain of purity has left a mark: blood on a white sheet. After marriages, blood stained sheets are often hung with pride from a balcony, or line nearby ľ purity intact.

No blood could be grounds for separation. If the family is ruthless they will make a pariah out of the girl. Exiled and ashamed, girls may turn to suicide. On the other hand, and fortunately, the more common scenario is sympathy from a family that hours earlier was singing the praises of this fated union. So a white sheet will be hung with the closely kept secret, that of sheepĺs blood, or tomato juice. And should the woman, knowing she is pure, feel so inclined, she can go with her husband to the hospital for an examination where a doctor will provide a document certifying that prior to the consummation this woman was indeed a virgin, thus dispelling any reservations of her husband and recently met in-laws.

This story has been posted in the following forums: : Headlines; COS - Kyrgyzstan; Blogs - Kyrgyzstan; Sex; AIDS; Wife Kidnapping; Women's Issues

I need to know why kidnapping in Third World countries is such an issue. Could you help me find information about this?