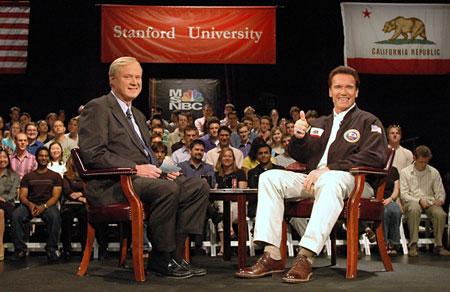 For a man who claims not to be a politician, Gov. Arnold Schwarzenegger showed a politician's tact in deflecting tough questions posed to him by "Hardball" host Chris Matthews during an appearance Monday in Memorial Auditorium. He also handily knocked a few softball questions, posed by members of the audience, out of the park.

Approximately 200 protestors gathered outside of the auditorium for the governor's live appearance on MSNBC's "Hardball College Tour" stop at Stanford, while 700 specially invited guests streamed in to the auditorium to hear his remarks.

The one-hour interview covered many topics that have proved controversial for the governor in recent weeks as he presses an agenda that includes stripping lawmakers of the ability to redraw voting districts, changing the ways teachers are paid, tinkering with pensions for state workers and trying to undo a state law setting nurse staffing requirements in hospitals. Schwarzenegger was also asked to voice his opinions about the war in Iraq and the steroid problems plaguing major league baseball.

Schwarzenegger received a warm welcome from the audience when he was introduced, and he pointed out that he had many supporters in the crowd, including George Shultz, former secretary of state and the Thomas W. and Susan B. Ford Distinguished Fellow at the Hoover Institution. The governor also praised the university for having a good basketball team and providing a home to the Hoover Institution.

"Anytime I need to improve my ratings, I come to you," Schwarzenegger told Matthews.

"All good things must come to an end," Matthews responded, signaling his intent to press the governor on a range of issues that have plagued him recently.

Matthews first asked Schwarzenegger for his reaction to a ruling earlier in the day by a San Francisco Superior Court judge that declared the state's ban on marriage between same-sex couples unconstitutional.

"I have always been comfortable with the domestic partnership rights," Schwarzenegger said. "I don't believe in gay marriage."

Schwarzenegger said that he expects the case to end up in the state supreme court and that he would uphold whatever decision is made there. He also criticized San Francisco Mayor Gavin Newsom and other mayors who he said overstepped their bounds by granting marriage licenses that were forbidden by law.

Matthews asked Schwarzenegger what it is like to be a politician, and Schwarzenegger dismissed the characterization, saying that he was elected as a reformer from outside of the traditional political system because he was not beholden to special interests and didn't owe anyone favors.

Schwarzenegger was asked about his recent battles with nurses over his efforts to unravel a law that set more stringent staffing levels for nurses in hospitals. Schwarzenegger said he "loves," "respects" and "honors" nurses but that he is against unions that are pushing agendas he feels are harmful to the state. Schwarzenegger said the law would place heavy burdens on hospitals to maintain higher staffing levels at a time when there is a nursing shortage in California, a problem that may lead to hospital or emergency room closures.

When pressed later by Matthews to explain why he labels unions "special interests" but not major drug companies and other corporations he meets with, Schwarzenegger said that, in some cases, there is no difference.

"Anyone that is putting a wedge between a legislator, or a politician that is supposed to make decisions on behalf of the people, and the people is a special interest," Schwarzenegger said. "If it is a union or if it is a drug company, it makes no difference."

Schwarzenegger expressed optimism that democracy will prevail in the Middle East, despite the insurgency currently seen in Iraq.

"Twenty years from now we will see great improvements there," Schwarzenegger said. "It is worth it because you cannot judge it just by what's going on today. You have to look at it in the future."

Although he poked fun at liberal actor Warren Beatty (saying he wouldn't give Beatty advice on acting if he didn't give him advice on politics), Schwarzenegger refused to throw fuel on a fire over differences on the minimum wage issue that he has with U.S. Sen. Ted Kennedy, D-Mass., the uncle of Schwarzenegger's wife, Maria Shriver. "Even if you tried very hard, you cannot put a wedge between Teddy and me because it's family, and I would never say anything negative about him," Schwarzenegger said.

A question-and-answer session with several members of the studio audience fed Schwarzenegger some of the easiest questions of the interview. One woman wanted to know what keeps him up at night, to which Schwarzenegger replied: "I'm a good sleeper because of a clear conscience."

One person wanted to know what Schwarzenegger would like to accomplish if he were to someday become president. He answered that he doesn't think of that hypothetical because he focuses on fixing the state's problems.

Another questioner admonished Schwarzenegger for "schoolyard name-calling" by referring to some Democrats earlier as "girlie-men" and saying "I kick their butt" when asked about a group of nurses who had protested him. Schwarzenegger responded that he was attempting to bring humor, fun and entertainment to the political arena "because it's so boring."

The last line of questioning for Schwarzenegger involved the issue of steroids. Schwarzenegger has in the past admitted to taking steroids when he was a body-building competitor, but he said Monday that he supports the efforts taken by Congress to tackle the issue.

"We have to do something about the drug use in sports," Schwarzenegger said. "It sends the wrong message to our children. The trick is that it's easier said than done."

This story has been posted in the following forums: : Headlines; COS - Swaziland; Journalism; Television

As a fellow RPCV, I find Chris Matthews to be such a disappointment. His views indicate to me that his Peace Corps experience had little affect on him, socially, spiritually, or politically.

Sad for him - sadder still for his viewers.

All are talking about 5 Bulgarian nurses and forgot about 450 childern injected with AIDs??? WHY WHY WHY

In Libya there are all nationalties working in the medical sector. Why the Bulg only were acused? there are other for better political acusation???

If Libya releases the nurses, it is a license to spread the AIDs around the world.