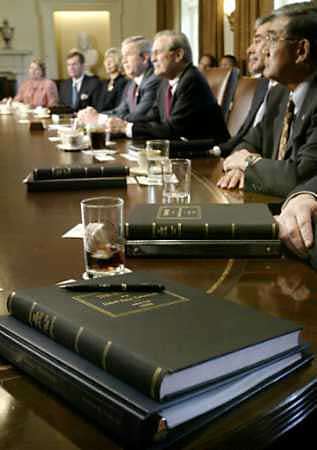 Caption: Copies of the proposed 2006 U.S. budget lay on the table of the White House Cabinet room as President George W. Bush (news - web sites) (4th R) speaks to the press following a cabinet meeting in Washington, February 7, 2005. Bush on Monday proposed a $2.5 trillion budget that slashes domestic programs from farm aid to housing grants for the poor, as he sought to curb budget deficits that have soared on his watch. Photo by Jason Reed/Reuters

The White House released their 2006 Budget today which included a proposal to fund the Peace Corps at $345 Million for FY06. This is a $27.7 Million increase over this year's budget and would allow the Peace Corps to open at least two new posts and maintain the existing number of volunteers at approximately 7,700 volunteers in the field, the highest number in 29 years.

Bush's proposal in his 2002 State of the Union address to double the Peace Corps to 14,000 volunteers appears to have been forgotten. The proposed budget still needs to be approved by Congress and there is no guarantee that the Peace Corps will get the amount proposed. Read the complete story at:

Winning the War on Terror is the highest foreign policy priority of this Administration. America continues to work tirelessly with our many counterterrorism partners overseas to deny al-Qaida any safe harbor and to disrupt their terrorist plots. The President also continues to strengthen America’s defenses in the War on Terror. In support of that objective, programs in the Department of State and related international-affairs agencies are directed at assisting the development of freedom, democracy, and economic opportunity in Iraq and Afghanistan; providing support to our coalition partners; improving the peacekeeping capabilities of other nations; and encouraging the spread of democracy and freedom necessary to thwart terrorism’s advance.

Ø The President’s FY 2006 Budget builds on the successes of the last four years. It includes: Humanitarian Assistance Programs:

o A commitment to help with the rehabilitation and reconstruction of countries devastated by the tsunamis and relief for the victims of the tsunamis;

o $1.2 billion for food aid, including a new initiative to provide $300 million in cash assistance, allowing emergency food aid to be provided more quickly to address the most urgent needs; and

o A commitment to help improve the economic and humanitarian crisis in Darfur as part of a FY 2005 Supplemental request.

o $3 billion, an increase of $1.5 billion, to expand the Millennium Challenge Account for foreign assistance, to encourage sound economic policies in the developing world;

o $360 million in economic assistance to help the Iraqi government deliver basic services to its people, collect revenues, and develop a free-market system capable of joining the global ec onomy;

o Nearly $1.1 billion to build on the positive momentum in Afghanistan through investment in health, education, clean water, and free-market infrastructure that will create conditions for sustained growth and stability, as well as to continue counternarcotics activities;

o $100 million to continue to support the enhanced Heavily Indebted Poor Countries Initiative by helping these countries to channel resources they would have used to pay interest and other debt-service costs into critical programs, such as health and education; o $120 million for the Middle East Partnership Initiative to expand democracy, support political, economic, and social reform , and improve access to education, information, and jobs;

o $80 million, an increase of $20 million over 2005 levels, for the National Endowment for Democracy (NED) to provide grants to private groups and organizations that build and strengthen democratic institutions and promote the rule of law, human rights, civic education, and a free press;

o $100 million for the Partnerships for Learning (P4L) Initiative, which provides scholarships and exchange opportunities to students in the Muslim world; and

o $79 million to the Middle East Broadcasting Network to provide accurate and balanced news and information to audiences in the Middle East. Managing Threats Abroad:

o Over $640 million for Pakistan to help advance security and economic opportunity for Pakistan’s citizens;

o Over $550 million to support Colombia’s unified campaign against drugs and terrorism; o $114 million for the second year of the Global Peace Operations Initiative. This Initiative, being implemented in cooperation with the G-8, pledges to:

§ Train and equip 75,000 troops by 2010 to increase global capacity to conduct peace support operations with a focus on Africa; and

§ Create a "clearinghouse" function to exchange information and coordinate G-8 efforts to enhance peace operations training and exercises in Africa;

o $100 million for the Conflict Response Fund to help the United States deploy trained and experienced civilian personnel immediately to an unstable region;

o $734 million for the Andean Counterdrug Initiative to consolidate gains made in recent years in the areas of eradication, interdiction, and alternative development; and o $437 million for operations to continue the fight against drugs in Afghanistan. Investing in Tomorrow’s Leaders and Service:

o $115 million in funding for support, training, and assistance programs to aid people and strengthen institutions that promote freedom and human rights and help establish the rule of law; and

Ø In addition to the FY 2006 Budget request, the President is planning a supplemental budget request for the War on Terror and support for Palestinians. This request includes funds for the State Department for embassy construction and operations in Iraq, the acceleration of reconstruction in Afghanistan, the support of critical partners in the War on Terror, support for Palestinians, and unanticipated events such as the humanitarian crisis in Darfur. It also makes it clear that we will continue to stand with the Iraqi and Afghan people against the terrorists desperately trying to block democracy and the advance of human rights.


When this story was posted in February 2005, this was on the front page of PCOL:

My view of the Peace Corps is that no taxpayers had much to do with its formulation. It was practically an executive order. I've tried to discover it's budget and funding for past years without success, except that Pres. Bush wanted to increase funding for 2008, the total about $345,000,000. Hospitalization for aliens is hidden, in one frame we observed. Aside from the many anecdotal heartwarms, my perception is that, as in the USAID throwaways,we taxpayers are being hornswoggled. The amount of money in U.S. taxpayer dollar throwaways to foreigners is enormous, running into billions of dollars, but no way to get anywhere near a real total due to government bureau obfuscations. If taxpayers knew what the totals were, there'd be some real screaming.

We need them to stay where are so they can they job done people keep dying more and more all of the world and when it is time for them for them to leave they should follow there Peace Corps. Leader's instcutions on what to do next.