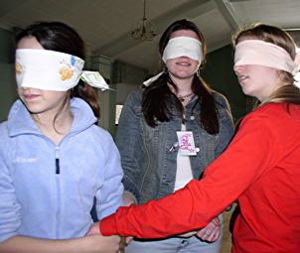 Caption: Chelsea Silva, Emily Henthorne and Ali Bulman (left to right) find other members of their "tribe" while blindfolded during a 30-hour fast event held at St. John's Church recently.

BARRINGTON - It was a regular teenage gathering, with one minor difference — there was absolutely nothing to eat. A total of 19 teenagers and two youth leaders from two Episcopal churches met last week for a 30-hour fast. The food-free event was both a learning experience for the students and a fund-raiser for impoverished areas of the world.

The church groups raised more than $3,000 for the cause, which will increase to more than $21,000 through a government grant which multiplies the group's contribution sevenfold, according to St. John's Director of Children and Youth Ministries, Becky Binns.

The chance to help others outweighed the hunger pains, said David Trost, 13.

"It's awesome because we're helping out people all over the world just by this small community thing. You wouldn't think 20 people could make a difference, but we can," he said.

The participants, all between the ages of 13 and 18, met at noon on Saturday, Feb. 26. On their honor, they were not to have eaten any food since midnight on Friday. They spent the entire 30-hour period with only water and Gatorade.

On Sunday morning, with stomachs growling, they were allowed a breakfast of rice, beans and fruit.

"I am hungry," said Erica Covington, 14, a few hours into the fast, "but I think it's really cool and great the way we're helping out other people who don't have as much as we do."

Two of the teens, Jesse Shelto and Lauren Bayuk, decided at almost the last minute to participate. They signed up the day before the event.

"It was just to see how it feels to be hungry all the time, and see if I can go 30 hours," Lauren said.

The 30-hour fast was also a chance for St. John's youth group members to meet with other people their age from Grace Chapel in Providence. The groups passed the time with interesting ethnic activities. During most exercises, Cuban, African or Mexican music played in the background.

"It's from countries where they're starving," David Trost said.

An interesting game, called "Tribe," occupied much of Saturday afternoon and evening. It was developed by World Vision, the organization which established the guidelines for the 30-hour fast.

For the game, each teen took on the persona of an African native. More than simply a way to pass the time, it was an interactive avenue to understanding the people and the manner of survival for those half a world away, where drought and famine are a frequent reality. Ms. Binns' travels — she spent two years in the Peace Corps, most of the time working in Togo, Africa — provided additional insight into the people of the country.

"The people are nomadic cattle herders living in Kenya and Tanzania. I got to visit them when I was in Kenya," she said. "They do this dance where they just keep their feet together, and jump like five feet off the ground."

To start the game, blindfolds were handed out to each teen. Walking, they each called out the name of their tribe to find others in the same tribe. Several teens were designated "orphans" and had to find any of three tribes who would adopt them. Some of the blindfolds were used to tie an arm behind a back or wrap around a leg to represent a disability.

The fast participants also spent time customizing notebooks with glitter and feathers and pictures cut from magazines, creating journals to chronicle their experience and thoughts.

The results varied from Tristan Tavares' simple "Hi" on the front cover, to Jack Hunter's pictures of a lizard with the words "Go there" and "Expand your universe."

No food for 30 hours

* 6 to 7: Breakfast and silent journal-writing time

* 7 to 8: Morning prayer outside, prepare to head home

This story has been posted in the following forums: : Headlines; COS - Togo; Fund Raising; Hunger