From the biography ōBogartö by A.M. Sperber and Eric Lax (RPCV Micronesia), one gets a clearer picture of Laura Bacall 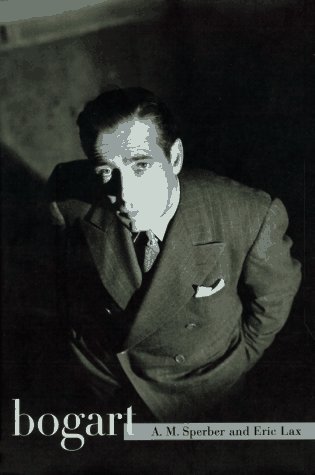 From the biography ōBogartö by A.M. Sperber and Eric Lax (RPCV Micronesia), one gets a clearer picture of Laura Bacall

Only a teenager could delude herself into thinking that she will heal an older manÆs wounds and bring happiness into his life simply by being there. The miracle is that their marriage in 1945 did more for Bogart, by common agreement, than anyone had a right to hope, including her. ItÆs difficult to get a feeling for how their relationship worked from BacallÆs account here. From the biography ōBogartö by A.M. Sperber and Eric Lax, one gets a clearer picture: ōA friend described them as having æa kind of Thin Man relationship. Very tart. Give and take. But done with a lot of warmth and humor. You got the feeling he adored her and she worshipped him.Æö

As successful as their marriage was ¢ Bogart died of what one assumes to have been a cigarette-induced cancer in 1957 ¢ aspects of that relationship could not have been easy. Although ōBogieö moderated his drinking after he met ōBettyö (her real name), he never gave it up, and there were still occasional wild and irrationally violent scenes. Like her father, he was sometimes emotionally out of reach. Both Bacall and Sperber and Lax refer to the period before their marriage when she would go to him and gleefully count off the remaining days and hours on her fingers. But only BogartÆs biographers record his reservations, to Earl Wilson, the columnist: ōThat tigress, I have the feeling of a mouse thatÆs going to be torn up by a rabbit.ö

Bacall, however, has begun to suspect that her single-minded drive might have had something to do with the disintegration of her decade-long second marriage, to Jason Robards Jr. ¢ by no coincidence another brilliant actor with a drinking problem who was even less dependable and more elusive than Bogart. She somehow realizes, as she tells the story, that she had been too anxious to dispel BogartÆs ghost, too ready to find a new life, too eager to overlook the problems that were clear enough to her friends ¢ and besides, she was pregnant. (She had two children with Bogart: a son, Stephen, and a daughter, Leslie.) She hardly bothers to mention the fact that abortions were illegal in those days. And she cannot help, despite herself, being a child of her times, echoing the need ōto belongö to someone, to subsume herself in the personalities and careers of her husbands even as she chafes against the nature of the role.

BacallÆs autobiography should be read in conjunction with Sperber and LaxÆs book, published in 1977, because each sheds light on and illumines the other. From BogartÆs biography, one has a better understanding of the mettle of a man who survived a hideous childhood and went on to become both a brilliant actor and a sensitive, aware and basically kind person. Bacall reveals herself as someone with the same kind of inner resilience and resourcefulness, even if the later pages of her book are shadowed by the loss of many people she has loved. And those who see her as a model of evolved womanhood, a questioning, self-realizing person who also understands the role she plays in the lives of her family and children, will find much to admire. She herself wrote, ōThe climb has been mostly upward, and IÆm still climbing.ö What a treasure.

ōBy Myself: And Then Someö by Lauren Bacall (HarperEntertainment) 506 pages, $26.95. Meryle Secrest is the author of ōDuveen: A Life in Art,ö as well as eight other biographies of figures in the arts and music, including Stephen Sondheim, Leonard Bernstein, Frank Lloyd Wright and Salvador Dali. She wrote this for Washington Post Book World.