Key African Art from the Gary Schulze Collection to be exhibited at QCC Art Gallery in Bayside, Queens through September 30 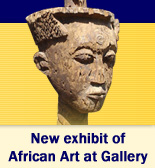 Key African Art from the Gary Schulze Collection to be exhibited at QCC Art Gallery in Bayside, Queens through September 30

30 DIFFERENT CULTURES, 15 COUNTRIES, AND 2000 YEARS OF HISTORY: Key African Art from the Gary Schulze Collection to be exhibited at QCC Art Gallery in Bayside, Queens

BAYSIDE, NEW YORK – Artists and Patrons in Traditional African Cultures: African Sculptures from the Gary Schulze Collection, a collection representing over 30 different cultures, spanning 15 countries, and some 2000 years of history will be exhibited at the Queensborough Community College Art Gallery from May 15 through September 30, 2005 .

The oldest artifacts, terracottas from the Nok area of Nigeria, date from 500 B.C. to c. 200 A.D., followed by Sape Confederation stone carvings dating from the 15th to the 17th century. Benin ivory and cast bronze objects were created during the 18th century, while the wood sculpture dates primarily from the 19th and 20th centuries. Many pieces in the collection are extremely rare; for example, a miniature Benin ivory leopard is one of only two in existence. (The second, presented as a gift to Queen Victoria, now resides in the British Museum.)

In Artists and Patrons, objects from West Africa predominate. Many originate among the Mende, Sherbro and Temne of Sierra Leone. Other areas of Africa are well represented, by masks and figures from the Dan, Grebo and We in Liberia and Ivory Coast, for instance, and by sculpture from Nigeria, Burkina Faso, Cameroon and the Congo.

This impressive exhibit has been curated by Donna Page, a noted authority on the art of Africa. Her essays include “Two, Three, Four: Multiples in African Art” for Muhlenberg College (1987), and most recently “Keepers of the History” in African Art from the Collection of Dr. Michael Berger for the SMA Museum in Tenafly, N.J. (1997). She has been an adjunct in the Department of Art and Photography at Queensborough College since 1987.

The wide variety of important and historic sculpture in this exhibition comes to Queensborough via the collection of Gary Schulze, who began studying African objects during his time as a Peace Corps volunteer in Sierra Leone during the early 1960s.

Over the past 20 years, Mr. Schulze has gathered an impressive selection of traditional African sculpture in a variety of media. Objects from his personal collection have been exhibited at the Smithsonian Institution in Washington, DC, the Yale Art Museum, Princeton University Art Museum and the Studio Museum of Harlem.

Pieces from his collection are illustrated in both the 1965 and 1986 editions of African Art in American Collections, published by the Smithsonian Institution, and in Surfaces: Color, Substances and Ritual Applications in African Art, to be released by Africana Publishing Company, an imprint of Holmes & Meier Publishers.

He helped the late Dr. M.C.F. Easmon establish the Sierra Leone National Museum in Freetown where Mr. Schulze was Acting Curator in 1962-63. He also served as Secretary to the Sierra Leone Monuments and Relics Commission. He traveled throughout the provinces collecting traditional art for the Museum collection and lectured on African art at the University of Sierra Leone. In 1996 he served as a United Nations Observer during Sierra Leone’s Presidential and Parliamentary elections.

Several of the objects to be exhibited are now in the collection of Queensborough Community College. With his generous donations to the QCC Gallery, Mr. Schulze has established a basis for the formation of a collection which will grow over time to represent the best of Africa's sculpture-producing cultures.

Artists and Patrons is the latest in a series of acclaimed shows at the Gallery since its re-launch last fall. Others include An American Odyssey (Debating Modernism), which received favorable attention from numerous publications, including the New York Times, Time Out NY, and The New Yorker; exhibits of the work of painter Rosalyn Engelman and sculptor Carole Feuerman; and a current exhibition of pieces from the Gallery’s Permanent African Art Collection and of the ancient Khabouris Codex.

The QCC Art Gallery is open free to the public on Tuesday and Friday from 10 to 5 p.m.; Wednesday and Thursday from 10 to 7 p.m.; Saturday and Sunday from 12 to 5 p.m.; and is closed on Monday. It is located on the campus of Queensborough Community College at 222-05 56th Avenue in Bayside (exit 29 on the Long Island Expressway). For further information and directions, visit www.qccartgallery.org or call (718) 631-6396.

This story has been posted in the following forums: : Events; Headlines; COS - Sierra Leone; Museums; Art; Masks