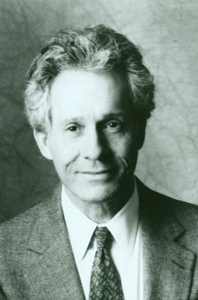 "The world changed forever because of those attacks," Mr. Rudenstine said over lunch. "In the time since then, all of us - in America and everywhere else - have become acutely aware of the forces of globalization, of the impact of economics on social development, of the role of business in shaping societies. Enron collapsed. Corporate scandals have mushroomed.

"Now, more than ever before, law schools and lawyers are critical in influencing the social, economic, political, and ethical fabric of our country," Mr. Rudenstine said. "Americans have always taken their liberties very seriously, but we often forget that lawyers are central in shaping order and liberty in a very complicated society like ours. And the legal community is especially critical to the organization of the market economy."

The vulnerability of America's economy to corporate abuse has been readily apparent in recent months. Mr. Rudenstine believes law schools must enhance education and research in areas where law, finance, and economics converge.

"Lawyers are essential to the marketplace because they structure the market place, they make it accountable - they have the capacity to ensure better corporate governance," Mr. Rudenstine said. "And contrary to the public impression, lawyers help keep the peace in a ferocious, dog-eat-dog free-market system....Their negotiations often result in agreements that are unsung and don't fetch headlines, but are essential to the smooth running of businesses and in the field of corporate governance."

Cardozo Law, in fact, has been offering courses in corporate governance for nearly two decades. At the Samuel and Ronnie Heyman Center on Corporate Governance, resident and visiting legal scholars, as well as political and business leaders, regularly address issues such as fiduciary duty, finance and financial disclosure, securities issuance, and takeover regulation.

Mr. Rudenstine's background doesn't suggest a specialization in business. A graduate of Yale, he was fired up by the idealism of the 1960s.He joined the Peace Corps and went to Uganda, where he witnessed two coups. He decided he wanted to go to law school, and took the LSAT at the Kampala office of the U.S. Agency for International Development.

Upon graduating from NYU Law, he worked on civil rights and other social justice issues.

"My generation had witnessed the collapse of Jim Crow-ism in the South, and other legal victories in civil rights," Mr. Rudenstine said. "So perhaps we were a bit unrealistic about the rate of change across the spectrum of other social issues in America. Some of those issues didn't have the intensity of civil rights. Welfare reform, better protection for consumers - these issues proved much more difficult to tackle than invalidating segregation laws."

Mr. Rudenstine persisted. He became the director of a research and writing project associated with the Citizens Inquiry on Parole and Criminal Justice.

His next job was as counsel to the National News Council, which dealt with issues of fairness and accuracy in the press. Mr. Rudenstine then spent five years at the New York Civil Liberties Union.

He joined Cardozo in 1979 as a professor of constitutional law. After a stint as acting dean, Mr. Rudenstine was appointed to the permanent position in November 2001.In addition to handling the trauma of the terrorist attacks, Cardozo had just started observing the 25th anniversary of its founding.

"The management of law schools today has become complicated," Mr. Rudenstine said. "A dean needs to also function as a CEO. It's not just personnel and administrative matters; it's also fund-raising and overseeing expenditures."

In his fund-raising, Mr. Rudenstine emphasizes the multidisciplinary nature of Cardozo's curriculum, and also its commitment to spurring a sense of public service among its students.

"The role of lawyers in our society with regard to public service is unique," Mr. Rudenstine said. "Lawyers are really civic leaders. They often define the public values that are at stake."

In recognition of this, Cardozo has created a Center for Public Service Law, whose students commit to entering public service.

The question of public-service staffing is assuming considerable urgency. Half of America's 3.9 million federal employees are eligible to retire in the next four years.

This story has been posted in the following forums: : Headlines; COS - Uganda; Law; University Administration