Anat Shenker met her husband, Donaldo Osorio, while on assignment in Honduras for the Peace Corps 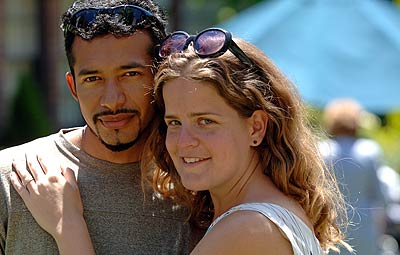 Anat Shenker met her husband, Donaldo Osorio, while on assignment in Honduras for the Peace Corps

Life is what happens when you take time off before graduate school — just ask Anat Shenker, Public Policy '05

BERKELEY – Many students were visibly star-struck at the graduation ceremony for UC Berkeley's Goldman School of Public Policy, giggling and blushing as they shook the hand of this year's keynote speaker, actor and director Warren Beatty, at a post-ceremony reception. At least one student was bold enough to give him her phone number. But Beatty's wife, Annette Bening, needn't fear.
Warren Beatty and Anat Shenker
Shenker shakes hands with guest speaker Warren Beatty at her graduation ceremony. Later, she approached the actor to discuss working for him.
"I just pitched him my idea about doing political consulting for stars," explains Anat Shenker, M.A. Public Policy '05. "I have absolutely no shame," she cheerfully admits — not surprising for someone whose résumé includes doing stand-up comedy in New York. Shenker's confidence is evidently persuasive: Beatty not only took her contact info, but gave her his.

Ask Berkeley graduating seniors what they're doing next, and the most common answer you'll hear is graduate school. Yet among Berkeley's graduate students are quite a few who took a detour along the way, and are glad they did. Shenker, 27, is one of them. And she's more than happy to explain how a Columbia University political science major ended up holding grant-writing workshops in Honduras for the Peace Corps, marrying a villager from the cloud forest, and thinking she had useful advice to offer Warren Beatty.

Shenker was born in a suburb of Tel Aviv to Polish parents; she speaks Polish only "to make others laugh," a little Italian, and is fluent in Spanish and Hebrew. Her father, a doctor, later moved the family from Israel to the American Midwest. Shenker spent her high school years in Madison, Wis., where she had an excellent Spanish teacher who'd been in the Peace Corps.

"Madison's a big Peace Corps place, actually," she says. "As soon as I heard about it, I knew I would do it, or at least try to do it."

But first she had to go to college, at Columbia University in New York City. Although Shenker is a self-described "exhibitionist" and "frustrated actress," she considered performing to be too financially risky as a career path. She chose to major in political science and Spanish instead, but gave her extroverted nature an outlet at comedy clubs. Starting at open-mic nights, she honed her brand of observational humor until she landed the occasional paying gig.

Shenker graduated from Columbia on a Sunday in 1999, and started work the next day as a management consultant. She soon realized she had made a mistake. She was working 80 hours a week just to make other people wealthy, and "I couldn't handle it." Less than six months later, she quit. The 20-year-old decided to join the Peace Corps, fulfilling her longtime goal.

If a whistle blows in the forest…

After her initial training period, Shenker was sent to live in the Parque Nacional la Tigra cloud forest of Honduras, near a village of 2,500 people called San Juancito. (A cloud forest is a wet, tropical forest, often found at an altitude of between 1,000 and 2,500 meters near peaks of coastal mountains; epiphytes and clouds are abundant, even in the dry season.) Since she was already fluent in Spanish, she was assigned to a brand-new Peace Corps program to help develop non-governmental organizations in Latin America through grant writing and project management assistance.

Shenker was working with a nonprofit charged with protecting the cloud forest, the first national park Honduras had set up. Unfortunately, it didn't take long for her to overhear details of back-room deals the nonprofit was making with logging companies to cut primary forest.

She spoke up against it. "I can't keep my mouth shut, which is one of the good and bad things about me," she says philosophically.

Her advice was not well received, to put it mildly. Her life was threatened, once with an AK-47 assault rifle while she was on vacation, and she had reason to be very afraid: she was living alone, in a very isolated area a two-mile hike from San Juancito. The Peace Corps wanted to pull her out of the region altogether, but she successfully pleaded just to be relocated into town.

"I really didn't think [the corrupt people] were going to kill me once I wasn't involved with the nonprofit anymore," she says. "American deaths are just too expensive."

In San Juancito, Shenker began working with a U.S.-educated Honduran woman who hired and taught local people to make housewares and furniture out of glass, metal, and wood; the workers also got a degree in art. Together, they turned an abandoned bus carcass into a (stationary) café and started a women's papermaking business.

Shenker met a young man around her age, Donaldo Osorio, the treasurer for the local soccer team. Osorio was one of seven children who all shared a room; he had studied woodcarving in school. Ignoring Peace Corps warnings about the pitfalls of fraternizing with locals, she fell in love with him.

Not long after, "we were taking a really long bus ride before taking a really long donkey ride that would lead to a hike to find a waterfall — this is a typical date in Honduras — and we were talking about how we could stay together," she recalls. "I didn't want to stay there, so the best option was to bring him over on a fiancé visa. I said, 'I guess we're getting married.'"

Shenker thinks the story doesn't sound very romantic, but fairy tales often don't. This one had its Grimm moments before the happy ending. On a trip to the capital, Shenker was the victim of a violent, random attack that required her to be medically evacuated from Honduras. However, it was September 11, 2001, and U.S. airports were closed while the country reeled in shock. She had to wait a few days before flying home.

How much for a little time and space?

Somewhat recovered by December, Shenker returned to Honduras to collect her belongings. While she waited for all the paperwork to be completed that would allow Osorio to follow her, she decided to move to Portland, Oregon, "on a whim, like I do everything in my life." Osorio arrived on March 19, 2002, and they were married four days later.

Shenker got a job with an outreach program for Latinos in a county with a lot of migrant farm workers. Although she likes to characterize her duties as holding "story time for 200 kids in Spanish," she was also coordinating between monolingual Spanish speakers and their children's schools, and doing research on second-language acquisition and early brain development.

Meanwhile, Osorio was learning English, and insisting on pulling his financial weight in their marriage. Having no luck finding work involving woodcarving, he worked in a canning factory and washed dishes. It was an eye-opening experience for Shenker. "I had no idea of the horrible stuff that goes on," she says. "People assuming they could pay him under the table [off the books] even though he was totally legal, saying things like 'You Hispanics are all the same.' But he never, ever complained. He just worked harder."

In 2003, Shenker decided that it was time to go back to school and study public policy. Thinking Berkeley would be a good match for them as a couple, she chose the Goldman School over its East Coast competitors. And after a rocky start — in which Osorio had to get up at 4 a.m. to commute to his job as a cabinetmaker in San Carlos, then go straight to English class before falling into bed at midnight — her guess has proved true.

At the Goldman School, Shenker found that she was actually good at the quantitative areas she had thought she was weak in, such as statistics and economics. Her final report (the Goldman equivalent of a thesis) looked at 52 impact studies about WalMart's economic effect on the communities it operates in and compared their outcomes. The majority of her report was devoted to recommending how economic-impact analyses should be standardized so as to maximize their value to the community.

Last fall, looking for an elective to take, Shenker ran across a cognitive-science seminar taught by professor George Lakoff that had a few seats unfilled, and decided — once again on a whim — to sign up. Lakoff, whose theories about the role that language plays in politics landed him in the national spotlight during the 2004 presidential election, took a liking to her.

Starting this summer, she'll be working with Lakoff at the Rockridge Institute, a not-for-profit progressive think tank he cofounded in Berkeley, doing outreach and grassroots organization. She is also serious, if Shenker can ever be said to be completely serious, about doing political consulting for stars.

Think of her as an intellectual stylist, rather than a celebrity stalker. "People watch up to eight hours of television daily, and yet we obsess over how 2 minutes of campaign commercials affect them," she points out. "Actors have to realize that they're influencing political opinion, even the ones who say they're nonpartisan. The ones who have a progressive viewpoint need help getting it across, and I want to provide that help."

Judging from Beatty's humorous, passionate, and substantive graduation speech, however, he doesn't need much help. What does Shenker think of Beatty as a candidate for political office, say, governor of California?

"I'd have to know more about his underlying thoughts, but I was unabashedly impressed by his speech," says Shenker. "He was hitting a lot of the right notes. "

She'd also love to help him. And since Shenker has demonstrated that she can do pretty much anything she sets her mind to, perhaps she'll get the chance.
UC Berkeley | NewsCenter | A-Z List of Web Sites | People Finder
Comments? E-mail newscenter@pa.urel.berkeley.edu
Copyright UC Regents

This story has been posted in the following forums: : Headlines; COS - Honduras; Married Couples; Romance; Public Policy