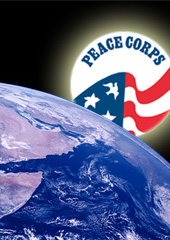 Since the turn of this new millennium, the global image of the United States has been steadily eroding. From its reckless unilateralism to the stalling war in Iraq, the U.S. image abroad is badly tarnished. But as the country tries to restore some of its previous luster abroad, Kevin Quigley argues that it is neglecting the one existing institution that could help it the most.

The Peace Corps and the U.S. Image Abroad

Since the turn of this new millennium, the global image of the United States has been steadily eroding. From its reckless unilateralism to the stalling war in Iraq, the U.S. image abroad is badly tarnished. But as the country tries to restore some of its previous luster abroad, Kevin Quigley argues that it is neglecting the one existing institution that could help it the most.

espite generating some goodwill through its aggressive and generous response to the Tsunami in Southeast Asia in 2005, the United States did not give the world a very good view.

The ongoing war in Iraq, the seemingly blatant disregard for other countries' interests and the strikingly unilateral approach to global challenges are just some of the reasons why the United States is broadly disliked.

According to a recent report by the Pew Global Attitudes Project, what is especially startling is not that the government of the United States is broadly disliked, but that attitudes about the U.S. people are becoming increasingly negative, even among traditional friends.

More and more, Americans are viewed in negative terms like "greedy and violent." It has gotten so bad that a majority of our Canadian neighbors consider Americans "rude."

Given these negative perceptions about the United States and its people, it is understandable that Western European publics are pressing for greater autonomy from the United States, especially in terms of increased independence in security and foreign affairs.

What, if anything, can the United States do to alter these negative perceptions?

Numerous heads of states like Alejandro Toledo of Peru and Olusegun Obasanjo of Nigeria studied with Peace Corps volunteers.

However, as Under Secretary of State for Public Affairs, Mrs. Hughes's tone-deaf initial efforts did not convey the sense that these perceptions in Western Europe or the Middle East will be altered any time soon.

Nor will payments to sympathetic journalists in places like Iraq have much impact.

There is one exception, however. This well-established program has for 45 years generated very positive perceptions of the United States abroad from heads of state to local farmers.

That program is the Peace Corps. More importantly, this is a program that has significantly altered the view of millions of Americans about those abroad through these volunteers' direct and personal experiences.

This program has sent 182,000 U.S. volunteers to 138 countries, operates on simple but proven principles that work for the host country and the United States.

The Peace Corps works well because it is not fundamentally about government — but simply about people helping other people strengthen their communities for themselves and their children.

These principles are to: 1) help others help themselves, 2) help them learn about the United States through individual, highly-personalized contact, and 3) have volunteers share their experiences with other Americans when they return home.

After the tragic events of September 11, 2001, President Bush recognized that expanding opportunities for Americans to learn about others through the Peace Corps was a critical national priority.

In his 2002 State of the Union address, he pledged to double the size of the Peace Corps to roughly 14,000 volunteers by 2007. With a year to go to reach this goal, the Peace Corps currently has roughly 7,800 volunteers. While that is a three-decade high, it is woefully short of the President's goal — and far below what the United States needs to begin to alter perceptions abroad. Moreover, it is well short of making a truly significant contribution to combating global poverty through the direct involvement of many Americans.

Sticking to the basics

The Peace Corps works well because it is not fundamentally about government — but simply about people helping other people strengthen their communities for themselves and their children.

Although the Peace Corps these days does not have the panache that it had in the heyday of the Kennedy era, it still is broadly supported by large numbers of Americans. That is, if they know about it.

As I travel around the United States, I am asked all too often, "Does the Peace Corps still exist?" Many think it ended decades ago.

According to a recent report by the Pew Global Attitudes Project, attitudes about the U.S. people are becoming increasingly negative, even among traditional friends.

But these negative attitudes about the United States are not just reflected in opinion polls. Just the other day, I caught a ride with a cab driver from Pakistan, a man who had changed his life by moving to the United States 20 years ago.

The cab driver went on then went on to say, "Don't they know what they are doing?" He wondered aloud during our conversation, "Don't they realize that it will take 30 or 40 years before people will have forgotten this episode of harshness and arrogance [in Iraq]?"

"Americans may be blessed with having a short-term memory, but U.S. foreign policy makers should be aware that people in the rest of the world don't forget as fast. They viewed Americans as heroes based on what they did just during much of the 20th century — but all of that has now come to naught."

One of America’s successes in the past 50 years is the Peace Corps. Especially noteworthy about the Peace Corps is that it is not perceived in partisan ways in the United States, and it is generally well regarded overseas. In this country, six returned Peace Corps volunteers serve in the U.S. Congress, equally divided between Republicans and Democrats.

Overseas, numerous heads of states like Alejandro Toledo of Peru, Olusegun Obasanjo of Nigeria, Meles Zenawi of Ethiopia and Isaias Afworki of Eritrea studied with Peace Corps volunteers. They know how important direct contact with Americans is for changing views and making connections that last a lifetime.

At a time when pundits like Michael Mandelbaum suggest that the United States is not the lion preying on others but an elephant inadvertently supporting others, as it feeds itself, the United States clearly needs a new view.

For 45 years, the Peace Corps has generated very positive perceptions of the United States abroad from heads of state to local farmers.

The world doesn't want the United States as either a lion or an elephant. Rather, our friends and allies look to the United States more as a captain of the team, where we all are playing on the same field working towards common goals. Given the nature of their experiences, Peace Corps volunteers understand this as well as any one.

If the United States is serious about changing the increasingly negative views about it, one of the best and easiest ways to do so is to fulfill President Bush's pledge and increase the Peace Corps to 14,000 volunteers within the next two years.

This story has been posted in the following forums: : Headlines; NPCA; Speaking Out; Expansion

He should be working on former volunteers who have been victims of violence in service and are being discrimated against because of their service in Peace Corps.

He needs to get a lawyer for the victims of violence during Peace Corps service and the good folks who served as volunteers.

The NPCA has not been a true advocate for victims of violence in service. The Dayton Daily News has proved this.

Just because members of the NPCA's service went well and the had good luck with the agency, doesn't mean volunteers should be blamed for the tragedies and horrible acts that were perpetruated on Volunteers.

They have not spoken out for anything.
There has been nothing that has come from this organization in terms of advocacy. This was testified in the hearings they had on Safety and Security of Volunteers. Basically, they are an extension of the problem of cover up of cases. If they are so good, where is their General Counsel for volunteers?

I don't care what Kevin says until he makes redemption of these wronged volunteers a priority.

Peace is why we joined and served in Peace Corps.
We did not join to be wrongfully gossiped about, slandered, or blamed for the horrible acts that have happened during so many volunteer's service.

This goes for your friends who serve in the Congress too.

Action is what we want and we will get it soon enough.

Where are you for the guy Michael is now calling for help with Medical service for service realted injuries on this site.

Kevin you are no where.

A real organization who cared would have his phone number and would calling him today.

Your organization's priorities are wrong.