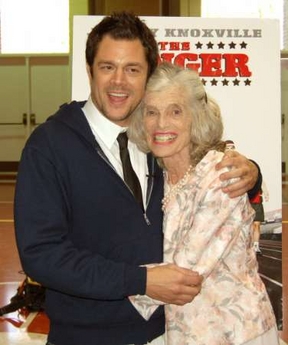 The Farrellys' intent all along, Shriver says, was to make a "transformational" comedy that alters perception of intellectual disabilities. "The risk was that you would start out with the ridicule, with the mockery, and have it not succeed in transforming into respect and humanization," he says. "And it would just stay at the level of trite humor." Tim Shriver, Chairman of Special Olymics, is the son of Peace Corps founding Director Sargent Shriver.

Special Olympics as comedy? Farrellys meet the challenge of The Ringer

Caption: Actor Johnny Knoxville (L) meets Special Olympics founder Eunice Kennedy Shriver, where he spoke with youth about the importance of acceptance, at the Rock Terrace School in Rockville, Maryland, in this publicity photo taken December 21, 2005 and released December 23, 2005, Knoxville stars in 'The Ringer', portraying a man who infiltrates the Special Olympic Games to dethrone a reigning champion and pay off a debt. NO SALES NO ARCHIVE Picture taken December 21, 2005. REUTERS/Fox Searchlight Pictures/Handout

In the first half-hour of the new Farrelly brothers comedy, The Ringer, words like "retard" and "feeb" are freely tossed about as a man persuades his nephew Steve (Johnny Knoxville) to pretend to be mentally disabled so as to easily win the gold in the Special Olympics.

Audiences will laugh, perhaps nervously, guiltily: Studying up his "'tard" behavior by watching Forrest Gump, Knoxville becomes "Jeffy," sporting red gym shorts pulled way too high. The movie opened Friday, and should further the Farrelly brothers' place in the universe of crass. And that discomfort you feel laughing at it? The fidgeting, the guilt?

All part of the plan.

And here is where you would normally place your bets on how quickly the people who run the Special Olympics would unleash a mighty indignation on behalf of those now called the intellectually disabled and immediately demand an apology.

But you'd lose that bet.

The Special Olympics gives The Ringer five thumbs up! (The National Association for Down Syndrome has also given its assent.) Special Olympics International made a deal with the Farrellys to assist this most unusual and ambitious comedy -- under certain conditions. Now everyone involved is holding their collective breath, waiting to see if critics and/or audiences will appreciate the fine line between irreverent humor and permission to mock.

"The risk of failing was enormous, but the upside of succeeding was even bigger," says Special Olympics Chairman Timothy Shriver.

In his office at Special Olympics headquarters, he does look Kennedyesque. He is the 46-year-old Yale-educated son of Sargent and Eunice Kennedy Shriver -- the do-good wing of the Kennedy clan.

His father, Sargent, is the devoted public servant who shaped the Peace Corps, the Job Corps and Head Start, and directed Lyndon Johnson's War on Poverty programs. His mother, Eunice, was inspired by her intellectually disabled sister, Rosemary, to found the Special Olympics in 1968.

"I've had good role models," says Shriver, who since joining the Special Olympics as president in 1996 has gradually taken charge for his parents, becoming chairman in 2003. He's also kept a hand in moviemaking of the upstanding variety, co-producing the 1997 slave saga Amistad and Disney's 2000 triumph-over-disability, The Loretta Claiborne Story.

And add to his resume, executive producer of The Ringer.

Shriver is counting on the movie to accelerate acceptance and understanding of people with intellectual disabilities.

He doesn't think he's made a mistake.

The Farrellys' intent all along, Shriver says, was to make a "transformational" comedy that alters perception of intellectual disabilities. "The risk was that you would start out with the ridicule, with the mockery, and have it not succeed in transforming into respect and humanization," he says. "And it would just stay at the level of trite humor."

So why risk at all? "Sixty percent of Americans say they don't want a child with special needs at their child's school," Shriver replies, doling out statistics: Worldwide, an "infinitesimal percentage" of people with intellectual disabilities get an education, a large percentage are institutionalized, a larger percentage are unemployed. "Most don't have friends, live lonely, depressed and isolated lives," he says.

In the fall of 2000, when Peter Farrelly first telephoned him, Shriver hadn't seen any of the brothers' movies.

But Shriver knew the brothers regularly wrote disabled characters into their films and often used intellectually disabled actors. And that they were often criticized for it.

"Peter approached us and said, `I want to figure out how to take this thing on head-on and I think I've got a great script for doing it,'" recalls Shriver, who also knew the Farrellys had been participating for years in Best Buddies, a nonprofit program his younger brother, Anthony Shriver, founded in 1987 to partner volunteers with intellectually disabled people. It's where the brothers befriended Scott Gasbarro, who became a regular companion and appeared in small roles in their films.

"What always bothered me is that any time there's been a movie with intellectual disabilities, it was sad," Peter Farrelly says. "All the time I hung out with my guy, Scott, I don't remember ever being sad. I remember laughing, him joking and me joking. I felt like nobody ever captured the fun side of being with somebody with intellectual disabilities."

He loved the concept screenwriter Ricky Blitt pitched at the Farrellys' production company, Conundrum Entertainment, six years ago. "I said, `We gotta make this movie!'"

But 20th Century Fox, and later Fox Searchlight, required that before they invested $15 million in the movie, the Farrellys had to get the endorsement of the Special Olympics.

After a meeting with Peter Farrelly,Shriver rented all the brothers' movies and quickly learned what he was up against. The Farrellys made comedies that were juvenile, inappropriate, contained four-letter words and bad behavior. And they were funny.

Shriver was particularly taken with the Farrellys' 2001 film Shallow Hal, despite its potential for poking fun at obesity. "The whole question of all of a sudden feeling like you are connecting with someone on the inside," he says. "When I saw that, I was sold."

But the Special Olympics board of directors still had to be convinced.

It would be another two years of talking before the cameras rolled.

Shriver and others pored over the script versions, red-lining bad language, raising sensitivity issues, balking at technicalities. He recruited Special Olympics athletes and their families to weigh in. "There were language issues," he says. And immediate objections to the early "retard" references. "They wanted them cut," says Peter Farrelly, who defended the putdowns as the whole point.

"By the end of the movie, they've become people, not retards," he says. "That's when Steve's uncle calls them 'tards and Steve says, `Don't ever say that word to me again. They're my friends!' We did say we wouldn't use that word excessively."

The movie was test-screened a dozen times in the past 10 months -- more than most filmmakers and studio heads prefer.

"We showed it the other night in Texas to 1,500 people involved in the Special Olympics, and that was the real litmus test. But it was through the roof," Bobby Farrelly says, still worrying whether other audiences will get it. "We're judged by our comedy, and so the vast majority of the moviegoing audience is going to judge us by whether it is funny. They're not going to [say], `Isn't that a nice message.'"

This story has been posted in the following forums: : Headlines; Directors - Shriver; Special Olympics