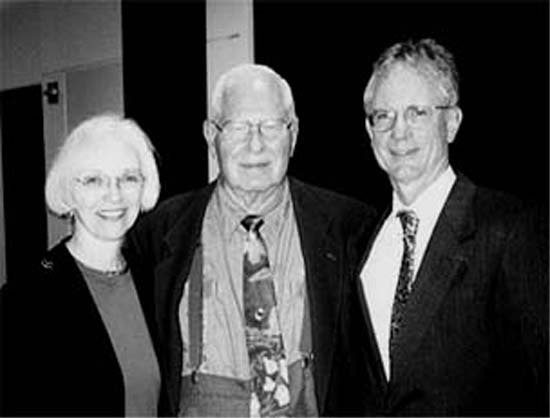 Jack Anderson, the Pulitzer Prize-winning columnist who struck fear into the hearts of corrupt or secretive politicians, inspiring Nixon operatives to plot his murder, died on December 17 at 83. In 1980 Anderson (above, center in a rare public appearance in 2000) published a plea to Colombian terrorists, asking them to contact him for private negotiations for the release of Peace Corps Volunteer Richard Starr. The negotiations were successful and on February 12, 1980, Richard Starr was released in Neiva, Tolima, Colombia. Starr had been held captive 1093 days. Read "Remember with Honor" for the full story.

WASHINGTON (AP) -- Jack Anderson, the Pulitzer Prize-winning muckraking columnist who struck fear into the hearts of corrupt or secretive politicians, inspiring Nixon operatives to plot his murder, died Saturday. He was 83.

Anderson died at his home in Bethesda, Maryland, of complications from Parkinson's disease, said one of his daughters, Laurie Anderson-Bruch.

Anderson gave up his syndicated Washington Merry-Go-Round column at age 81 in July 2004, after Parkinson's disease left him too ill to continue. He had been hired by the column's founder, Drew Pearson, in 1947.

The column broke a string of big scandals, from Eisenhower assistant Sherman Adams taking a vicuna coat and other gifts from a wealthy industrialist in 1958 to the Reagan administration's secret arms-for-hostages deal with Iran in 1986.

It appeared in some 1,000 newspapers in its heyday. Anderson took over the column after Pearson's death in 1969, working with a changing cast of co-authors and staff over the years.

A devout Mormon, Anderson looked upon journalism as a calling. He was considered one of the fathers of investigative reporting, renowned for his tenacity, aggressive techniques and influence in the nation's capital.

Anderson won a 1972 Pulitzer Prize for reporting that the Nixon administration secretly tilted toward Pakistan in its war with India. He also published the secret transcripts of the Watergate grand jury.

Such scoops earned him a spot on President Nixon's "enemies list." Watergate conspirator G. Gordon Liddy has described how he and other Nixon political operatives planned ways to silence Anderson permanently -- such as slipping him LSD or staging a fatal car crash -- but the White House nixed the idea.

Over the years, Anderson was threatened by the Mafia and investigated by government agencies trying to trace the sources of his leaks. In 1989, police investigated him for smuggling a gun into the U.S. Capitol to demonstrate security lapses.

Known for his toughness on the trail of a story, he was also praised for personal kindness. Anderson's son Kevin said that when his father's reporting led to the arrest of some involved in the Watergate scandal, he aided their families financially.

"I don't like to hurt people, I really don't like it at all," Anderson said in 1972. "But in order to get a red light at the intersection, you sometimes have to have an accident."

Anderson began his newspaper career as a 12-year-old writing about scouting activity and community fairs in the outskirts of Salt Lake City, Utah. His first investigative story exposed unlawful polygamy in his church. He was as a civilian war correspondent during World War II and later, while in the Army, wrote for the military paper Stars and Stripes.

After he went to work with Pearson, the team took on communist-hunting Sen. Joseph McCarthy, exposed Connecticut Sen. Thomas Dodd's misuse of campaign money, and revealed the CIA's attempt to use the Mafia to kill Cuban leader Fidel Castro.

He was diagnosed with Parkinson's in 1986. In a speech a decade later, he made light of the occasional, uncontrollable shaking the disease caused.

"The doctors tell me it's Parkinson's," he said. "I suspect that 52 years in Washington caused it."

He is survived by his wife, Olivia, and nine children.

Copyright 2005 The Associated Press. All rights reserved.This material may not be published, broadcast, rewritten, or redistributed.

This story has been posted in the following forums: : Headlines; Obituaries, Investigative Journalism; Journalism