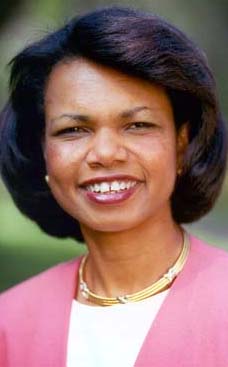 Rice said we do not now have the right numbers of people in the right places. As an example, she said, “we have nearly the same number of State Department personnel in Germany, a country of 82 million people, that we have in India, a country of one billion people.” Rice concedes these shifts in priorities will be “the work of a generation” but she said it will start this year with a “down payment” by shifting 100 positions, mostly now based in Washington and Europe, to “countries like China and India and Nigeria and Lebanon.”


At the core of any bureaucratic organization is a generalized resistance to change. One does not normally think of using the words ‘transformation’ and ‘bureaucracy’ in the same sentence, but that’s exactly what employees at the Department of State and the Agency for International Development were confronted with this week by their boss, Secretary of State Condoleezza Rice.

Using public speeches, question-and-answer sessions and background briefings for reporters, Rice and senior members of her team spent much of the week announcing and explaining her plans for what she calls "Transformational Diplomacy." Rice’s objective, she told students and faculty at Georgetown University’s School of Foreign Service, is to forge a new way to work with other countries “…to build and sustain democratic, well-governed states that will respond to the needs of their people and conduct themselves responsibly in the international system. Let me be clear,” Rice continued, “transformational diplomacy is rooted in partnership; not paternalism. In doing things with people, not for them; we seek to use America’s diplomatic power to help foreign citizens better their own lives and to build their own nations and to transform their own futures.”

Not many would quarrel with the lofty goals, but how was this going to affect American diplomats and the work they do? Rice and senior officials explained what this would mean. There would be a new focus on regional solutions to address such issues as counter-terrorism, drug trafficking and disease. America’s diplomats will be required as part of their career advancement to serve in hardship posts like Iraq, Afghanistan and Nigeria. More Foreign Service officers will be based outside of our embassies which are located in world capitals (American Presence Posts) and some will do their diplomatic work making contact with foreign nationals by managing newly created Internet sites (Virtual Presence Post).

Rice said we do not now have the right numbers of people in the right places. As an example, she said, “we have nearly the same number of State Department personnel in Germany, a country of 82 million people, that we have in India, a country of one billion people.” Rice concedes these shifts in priorities will be “the work of a generation” but she said it will start this year with a “down payment” by shifting 100 positions, mostly now based in Washington and Europe, to “countries like China and India and Nigeria and Lebanon.”

Another aspect of this week’s reorganization was a tightening of the management structure for U.S. foreign assistance and development aid. Rice has created a new position, director of foreign assistance, who will also serve as administrator of the Agency for International Development, which already comes under the purview of the secretary of state. President Bush has named Randall Tobias, a former pharmaceutical executive and current head of the administration’s HIV/aids program to the new post. Together, State and AID control about $19 billion a year in funding for foreign assistance programs.

Senior aides to Rice told reporters that this reorganization was necessary because, for example, when Rice asked how much money was being spent on democracy-related programs, it was not “easy to get that answer.” Congress has amended the country’s foreign aid structure more than 200 times since it was created more than 40 years ago, the officials said, and many bureaus within the state department have, over time, developed their own assistance programs. “They tend to think of them as ‘theirs.’ They are not,” said one of the senior officials. Although all assistance programs will now be reviewed by Mr. Tobias, the senior officials rejected any suggestion the new arrangement would mean decisions on foreign assistance were now more likely to be made on political grounds.

Notice of these plans was front page news in The Washington Post and The Washington Times, which came as no surprise since for many of their readers such changes in the federal bureaucratic structure is, indeed, the most interesting news of the day. But whether these moves eventually will be seen as having been visionary steps taken during Rice’s tenure or simply turn out to be a diplomatic version of rearranging the organization charts in Foggy Bottom is something which will be evaluated long after Rice and her colleagues have left Washington.

For now, it is clear Rice’s actions should be viewed not only in terms of management reform, but also as stemming from her understanding of the lessons of recent history. This Secretary of State sees the early years of the 21st century as a period during which dramatic and innovative policy changes are called for and in fact are overdue in the aftermath of the Cold War and the fall of the Soviet Union. Rice often cites the bold changes made after World War II by her predecessors, Secretaries George C. Marshall and Dean Acheson, which led to the formation of NATO and, ultimately, as she said to her Georgetown audience, “…..a Europe whole and free and at peace.” If viewed simply in that historical light, we should not be too surprised at the steps announced this week.

This story has been posted in the following forums: : Headlines; Diplomacy