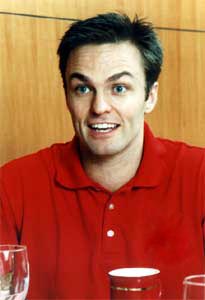 “I came to the Philippines with no expectations. I was excited to play but I didn’t expect to be here this long. It was like, let’s see how it goes,” recalls Compton. The six-foot cager says it actually took some time before he decided to play basketball overseas. Although his American parents worked as Peace Corps volunteers in the Philippines, he hardly knew anything about his birth country. “I danced the tinikling when I was eight,” he says with a laugh. “But other than that, wearing a barong and my parents having Filipino friends, I didn’t know much about the Philippines. But my parents told me stories, like how my brother spoke Tagalog.”

Why Alex Compton wants to stay

Editor's Note: Published on page Q4 of the May 7, 2006 issue of the Philippine Daily Inquirer

HE’S so nice he actually compliments his opponents on the court. But Alex Compton, shooting guard of the Montaña Jewels in the Philippine Basketball League (PBL), claims he’s had a behavioral turnaround. Before he came to the Philippines eight years ago, Comptom says he lived a typical jock’s life in the United States: “I wanted to be popular, to be cool with everybody, just party a lot and have a great time. I was a big drinker.” His main motivation in life then, he adds, was “to be a good basketball player, have a good time, have the prettiest girlfriend.”

Not that the player’s previous disposition matters at all to coaches, players and fans who equally favor his solid game and gentle demeanor. The fact that he speaks Tagalog so fluently has endeared him as well to basketball-loving Pinoys.

“I came to the Philippines with no expectations. I was excited to play but I didn’t expect to be here this long. It was like, let’s see how it goes,” recalls Compton.

The six-foot cager says it actually took some time before he decided to play basketball overseas. Although his American parents worked as Peace Corps volunteers in the Philippines, he hardly knew anything about his birth country. “I danced the tinikling when I was eight,” he says with a laugh. “But other than that, wearing a barong and my parents having Filipino friends, I didn’t know much about the Philippines. But my parents told me stories, like how my brother spoke Tagalog.”

Serendipity helped things along. On January 1996, Compton learned about Philippine basketball while playing for the varsity team of Cornell University in Ithaca, New York. “I was chatting with my assistant coach who said that in 1991, he played in the Philippines. And I said that was where I was born. I wasn’t even thinking about it, I just said it in passing. And he said, ‘You were born there? You know you can play there? Basketball is huge there.’ And it has always been my dream to play basketball overseas,” recalls Compton.

People then suggested that he quit college. But Compton, a junior student then, knew there was no way he was trading his Ivy League education even for the sport he passionately loves. “Cornell University is a great school and I said I’m going to graduate first, and then I’ll go,” he says. “But I also started reading about Philippine history more and a lot of other stuff. I was really planning it out. I was just so excited to come.”

Compton thought moving to the Philippines would be similar to living in Thailand, where he stayed with his family for a year.

Compton certainly had no expectations of an easy life. Yet surprisingly, that’s exactly what he got. “When I got here, everybody speaks English so well, there’s English on TV. There are American restaurants here and there. I thought, this isn’t too much of an adjustment, this is really easy,” he says.

Compton admits that he wasn’t too diligent with his Tagalog lessons in his first year. But while playing in the Metropolitan Basketball Association (MBA), he admittedly felt like an outsider. So he picked up the language as quickly as he piled up points on court. “I got a tutor and on my second year, I had two to three lessons a week. I also asked everybody on my team and my friends to speak to me in Tagalog. If I don’t understand, I’ll ask them. So the first two phrases I learned from my tutor were ‘Hindi ko naintindihan’ (I don’t understand) and ‘Ano ibig sabihin niyan?’ (What does that mean?) I used to say that like 30 times a day. And if I just got five words a day, that helped,” he muses.

Things were different on court where nothing, it seemed, could go wrong for Compton as he led his team to the championship and captured the Most Valuable Player award. Unfortunately, his local stint came to a halt as the fledgling pro league folded up in 2002. Quite fittingly, Compton bid the MBA goodbye with a historic three-point shot that turned out to be the last basket for the league.

With his impressive local debut, Compton became a prized recruit among other teams from the Philippine Basketball Association (PBA). However, citizenship issues have been stalling his entry into the premier pro league. “Hopefully the PBA lets me in. If they don’t, I really understand,” says Compton, who has been playing for the amateurs with the Montaña Jewels in the PBL.

“I still really love to play. I love practicing, I love playing to get better, I like the competition,” he notes.

In fact, at 32, Compton hasn’t lost his streaky touch. Even with a recent calf injury, he still buries those big shots at crunch time. “I really still have that competitive fire, that drive. I’d love the challenge of trying to guard (PBA) guys like Mark Caguioa, Dondon Hontiveros, Olsen Racela, Jeff Cariaso, Jimmy Alapag. It’s a tremendous challenge but I love that, it’s fun,” he says.

Some well-meaning friends have suggested that he try out in the National Basketball Association (NBA) in the US, but Compton quickly puts the idea into perspective. “There are about 40 jobs a year that open up in the NBA. There are 4,000 people who get struck by lightning every year. So you’re a hundred times more likely to get struck by lightning than get in the NBA. It’s hard to get in that league. It’s the best of the best in the world. I’m not one of them and that’s fine,” he says candidly.

Although Compton also has several product endorsements, he admittedly isn’t keen on entering showbiz either. “There’s a limit to what I can do,” he points out.

Right now, Compton would rather stick to what he knows best. “I’m really just holding out for the PBA,” he says. “ I’ve already talked to a coach I’m going to train with in the States because I want to get better. I’ve also planned out my summer specifically for the PBA because if I’m given the luxury, that opportunity to play in the PBA, I want to be ready. I want to be at my best.”

The uncertainty is undoubtedly stressful, but Compton surprisingly still wants to stay in the Philippines. “The cultural personality of the Filipinos really fits with who I am as a person, which is laidback. Like, ‘let’s joke around, let’s have fun, let’s hang out,’” he says. “It’s weird. I really feel like this is my home,” he continues. “I always wanted to be a dual citizen, but according to the law, I can’t be. But I’d rather live here than in the States. I love the Philippines, I love the Filipinos. I just feel like this is the country where I could have the most significant, positive impact for most of my life.”

This story has been posted in the following forums: : Headlines; COS - Philippines; Sports; Basketball