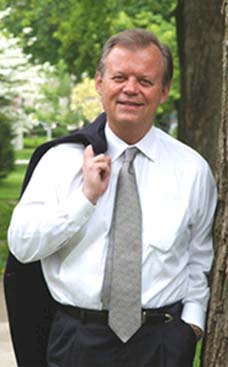 "I'm just very open and excited about the future," he said. Opportunities include becoming a professor, heading nonprofit organizations, starting a think tank and continued campaigning to end hunger. "Anything dealing with humanitarian work and representing people that are hurting — that's what I want to do," he said. "I want to be useful." Former Congressman Tony Hall of Ohio, now ambassador to the United Nations Agencies for Food and Agriculture, served as a Peace Corps Volunteer in Thailand in the 1960's.

More than three years as ambassador to U.N. agency

Tony Hall is preparing to end his tenure as U.S. ambassador to the United Nations Agencies for Food and Agriculture, a post he will leave April 1 after more than three years.

Hall met the three-year mark in September, but the Bush administration asked him to stay on for another six months. The White House has yet to nominate a successor.

Hall said it's unclear what he'll do after his ambassadorship is up.

The first few weeks, however, are booked. Hall will spend that time promoting his book, Changing the Face of Hunger: One Man's Story of How Liberals, Conservatives, Democrats, Republicans and People of Faith are Joining Forces to Help the Hungry, the Poor and the Oppressed.

The book, being written with former Dayton Daily News reporter Tom Price, is scheduled for publication April 4. After that, Hall said, "I'm going to be looking for a job."

Hall, who turns 64 in January, said he has already been contacted by colleges, universities and nonprofit organizations, and has not decided what he'll do.

"I'm just very open and excited about the future," he said. Opportunities include becoming a professor, heading nonprofit organizations, starting a think tank and continued campaigning to end hunger.

"Anything dealing with humanitarian work and representing people that are hurting — that's what I want to do," he said. "I want to be useful."

Hall said he does not intend to return to a political career.

"You know, I served as state senator, state representative and in the U.S. Congress for 24 years," he said. "I figured, that's enough. I loved it and everything, but I have no plans to run for office."

Hall was in Dayton on Wednesday night for a dinner in his honor sponsored by the Progressive Volunteers of Dayton. About 400 attended the event at the Marriott Hotel on Patterson Boulevard.

The dinner is expected to raise $5,000 to $10,000, which is to be donated to the House of Bread in Hall's name, said former Daily News publisher Brad Tillson, who acted as fundraiser for the dinner.

Until April 1, Hall said he and his wife, Janet, will finish their work and prepare the Rome-based post for the next ambassador. He is picking staff members for his successor, sifting through between 30 and 70 applications for every available job. Hall's office employs 17.

Max Finberg, director of the Alliance for Hunger and a former Hall congressional aide, said Hall made his position "a wonderful platform for being a voice for the voiceless."

Finberg said Hall highlighted the importance of ending hunger as good diplomacy. In Hall's Rome office, he kept bags used to distribute food to countries around the world. Each bag read "A Gift of the People of the United States," in the language of the country where food was being distributed. Hall would show the bags to visitors to his office.

"He'd tell them, 'This is one of the best tools of American foreign policy,' " Finberg said.

Hall became interested in fighting world hunger in the 1980s, when he flew to Ethiopia where he witnessed devastating famine. He went on to make hunger a key issue in office — in 1993, he fasted for 22 days to draw attention to the cause. In 2002, he left Congress to take on the ambassadorship.

On Friday in Dayton, Hall is to give a speech on hunger. The event is at the College Hill Community Church.

Between the tsunami and the hurricanes, he said, 40 crises around the world are currently contributing to international hunger. It's a daunting mission, he said, and there is still much to do.

Three times nominated for the Nobel Peace Prize, Ambassador Tony P. Hall is one of the leading advocates for hunger relief programs and improving international human rights conditions in the world. Former Congressman Tony Hall of Ohio, now ambassador to the United Nations Agencies for Food and Agriculture, served as a Peace Corps Volunteer in Thailand in the 1960's.

Three times nominated for the Nobel Peace Prize, Ambassador Tony P. Hall is one of the leading advocates for hunger relief programs and improving international human rights conditions in the world. In February 2002, President George W. Bush asked him to serve as the United States Ambassador to the United Nations Agencies for Food and Agriculture. He was then confirmed by the U.S. Senate and sworn in by Secretary of State Colin Powell in September 2002.

As the chief of the U.S. Mission to the U.N. Agencies in Rome – the World Food Program (WFP), the Food and Agriculture Organization (FAO) and the International Fund for Agricultural Development (IFAD) – Ambassador Hall is responsible for “putting into action America’s commitment to alleviate hunger and build hope in the world.”

Prior to entering the diplomatic corps, Mr. Hall of Dayton, Ohio, was a member of the U.S. House of Representatives. He represented the people of the Third District of Ohio for almost twenty-four years, their longest serving representative in history. He was the chairman of the House Select Committee on Hunger and the Democratic Caucus Task Force on Hunger. He founded and was one of two House members on the steering committee of the Congressional Friends of Human Rights Monitors. He was the author of legislation supporting food aid, child survival, basic education, primary health care, micro-enterprise, and development assistance programs in the world’s poorest countries. Ambassador Hall is also founder and was chairman of the Congressional Hunger Center, a non-governmental organization dedicated to fighting hunger by developing leaders.

Mr. Hall was a founding member of the Select Committee on Hunger and served as its chairman from 1989 until it was abolished in 1993. Mr. Hall has been an outspoken advocate for fighting domestic and international hunger and he has initiated legislation enacted into law to fight hunger-related diseases in developing nations. He was the sponsor of a successful 1990 emergency measure to assist state Women, Infants and Children (WIC) programs and legislation to establish a clearinghouse to promote gleaning to provide poor people with food. Mr. Hall has worked to promote micro-enterprise to reduce joblessness. In response to the abolishment of the Hunger Committee, in April 1993, Mr. Hall fasted for 22 days in order to draw attention to the needs of hungry people in the United States and around the world.

In his efforts to witness the plight of the poor and hungry first-hand, he has visited numerous poverty-stricken and war-torn regions of the world. Ambassador Hall has spent time in more than 100 countries – ranging from Afghanistan to Zimbabwe. He was the first Member of Congress to visit Ethiopia during the great famine of 1984-5. He has visited North Korea six times since 1995, and was one of the first Western officials to see the famine outside of the capital, Pyongyang. In 2000, he became the first Member of Congress to visit Iraq in order to investigate the humanitarian situation. During his second week on the job as Ambassador, he traveled to Zimbabwe and Malawi to see the food security crisis in southern Africa.

Mr. Hall has worked actively to improve human rights conditions around the world, especially in the Philippines, East Timor, Paraguay, South Korea, Romania, and the former Soviet Union. In 2000, he introduced legislation to stop importing "conflict diamonds" that are mined in regions of Sierra Leone, Angola and the Democratic Republic of Congo. In 1983 he founded the Congressional Friends of Human Rights Monitors. In 1999, he was a leader in Congress calling for the United States to pay its back dues to the United Nations.

In 1997 and 2000, Mr. Hall introduced legislation calling on Congress to apologize for slavery. He has also worked at promoting reconciliation among diverse peoples through a number of private initiatives.

Mr. Hall is married to Janet Hall. They have two children. Mr. Hall graduated from Fairmont High School, Kettering, Ohio, in 1960. In 1964 he received his A.B. degree from Denison University, Granville, Ohio. At Denison, he was a Little All-American football tailback and was named the Ohio Conference's Most Valuable Player in 1963. During 1966 and 1967, Mr. Hall taught English in Thailand as a Peace Corps Volunteer. He returned to Dayton to work as a realtor and he was a small businessman for several years.

Mr. Hall served in the Ohio House of Representatives from 1969 to 1972, and in the Ohio Senate from 1973 to 1978. On November 7, 1978, Mr. Hall was elected to the 96th Congress. He served on the Foreign Affairs and Small Business Committees before being appointed to the Rules Committee at the beginning of the 97th Congress.

Ambassador Hall was nominated for the Nobel Peace Prize for 1998, 1999 and 2001 for his humanitarian and hunger-related work. For his hunger legislation and for his proposal for a Humanitarian Summit in the Horn of Africa, Mr. Hall and the Hunger Committee received the 1992 Silver World Food Day Medal from the Food and Agriculture Organization of the United Nations. Mr. Hall is a recipient of the United States Committee for UNICEF 1995 Children's Legislative Advocate Award, U.S. AID Presidential End Hunger Award, 1992 Oxfam America Partners Award, Bread for the World Distinguished Service Against Hunger Award, and NCAA Silver Anniversary Award. He received honorary Doctor of Laws degrees from Asbury College, Antioch College and Eastern College and a Doctor of Humane Letters degree from Loyola College. In 1994, President Clinton nominated Mr. Hall for the position of UNICEF Executive Director.