Derek Volkart takes out his anger through helping others in Morocco 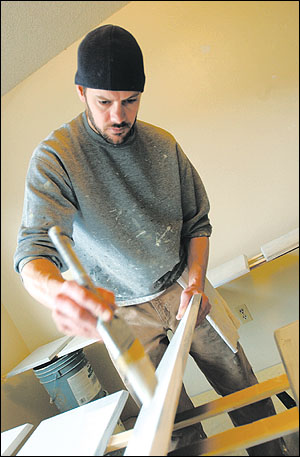 His decision to join the Peace Corps in “response to our current fascist government,” doesn’t initially make sense. And still, serving as an environmental volunteer in Morocco, a Muslim country with a constitutional monarchy, doesn’t distress Derek. “I told my parents that if they helped to re-elect George Bush, I would leave the country,” he says.

Derek Volkart takes out his anger through helping others in Morocco

Taking out his anger through helping others

Caption: Ashland painter and carpenter Derek Volkart’s decision to join the Peace Corps as an environmental volunteer in Morocco was cemented by the U.S. government’s policies both at home and abroad. Photo: Orville Hector | Ashland Daily Tidings

One month before his Peace Corps commitment begins, Derek Volkart casually sands cabinets. He wears paint-caked overalls and rubber-palmed gloves. In his small workspace of buckets and brushes, he quotes Mark Twain.

Derek’s gentle manner of sweeping away dust and preparing cabinets for painting belies his frustration with America’s state of democracy. His decision to join the Peace Corps in “response to our current fascist government,” doesn’t initially make sense. And still, serving as an environmental volunteer in Morocco, a Muslim country with a constitutional monarchy, doesn’t distress Derek.

Instead he says, “I might prefer a monarchy that honors and adheres to its constitution.”

Plus, Derek’s keeping a promise. “I told my parents that if they helped to re-elect George Bush, I would leave the country,” he says. His intense dark eyes, framed in a trimmed brown beard, hint at his depth of opposition.

The oppression he feels from the current administration has motivated him to “serve somewhere else in the world.”

“I actually had a choice between a Marine Conservation nomination in the Pacific Islands, where I’d be scuba diving every day,” he says, “and I chose Morocco.”

The Kingdom of Morocco has welcomed 4,000 Peace Corps volunteers in 42 years. But the U.S. war in Iraq threatens civilities. Although Morocco is a U.S. ally, more than 200,000 people gathered for an anti-war protest in the capital of Rabat. In 2003, five bombs in Casablanca killed 33, wounded more than 100, and compelled the Peace Corps to temporarily withdraw volunteers from the country.

The U.S. State Department announced after the bombings: “The potential for violence against U.S. interests and citizens as a result of the military action in Iraq, and for transnational terrorism, remains high in Morocco and other countries in the region.” Fighters in the Moroccan Islamic Combatant Group trained in Afghanistan. The State Department says these fighters possess the goal of “establishing an Islamic state in Morocco and supporting al-Qaida’s jihad against the West.”

After deliberation, the Peace Corps re-entered Morocco in June 2004. Aware of these hostilities, Derek asserts the National Call to Service Program, which enables military personnel to fulfill part of their obligation by serving in the Peace Corps, further endangers volunteers.

But Derek is not focusing on the danger of his service commitment.

“I’m about to have my mind blown,” he says. “It’s easy not to worry when you can’t imagine what will happen.”

And last year, while caught in an avalanche, Derek realized “how tenuous this life is.” This experience — having his ears and mouth stuffed with snow — as much as his desire to appease political frustration and to grow both personally and professionally, motivates him to act.

Although Derek’s motives are clear, he admits he has no idea what he’ll learn. In his first 11 weeks he will learn Arabic, the Berber language dialects of Tashelhit and Tamazight, and cross-cultural communication skills. The other details of Derek’s community forestry position will be determined during the three-month training. Derek hopes to be placed in the mountains.

“I’m excited about living with one of the oldest cultures in the world, the Berbers,” and re-emphasizing his mission, he continues, “I’m excited about sharing with Islamic culture that the U.S. government and the American people can be very different when it comes to war and peace.”

Environmental volunteers serve in Morocco’s National Parks and ecological reserves. They have worked to enhance eco-tourism and environmental awareness. Derek’s degree from the University of Montana in Resource Conservation will serve him, as will his experience with the Forest Service monitoring soil compaction, and his coordination of Headwaters’ conservation efforts.

Now he employs his carpentry skills because “I burned out,” he explains, “fighting all the violations against environmental law, and all the undermining of the law through rule changes.”

But he still participates. He attends public meetings. He writes letters to the local editors and to elected officials. He serves on the board of the Klamath Siskiyou Wildlands Center.

Derek credits KS Wild and other conservation groups struggling with the Bush administration’s cutbacks. “These are very tough times to be protecting the environment,” he says.

He admits his decision to join the Peace Corps is both a fight and a flight response. He flees his government, and fights to turn his negative emotions into positive outcomes.

Luckily, he chides, “there’s no law that says I have to agree with my government to do this. They’re still drafting that legislation.”

Derek takes his tasks seriously, as many first-born do. Today, he sands splinters. Not far from tomorrow he will teach and learn about Moroccan forestry. He leaves on March 3. He’ll be leaving his paint-caked overalls, buckets and brushes.

“I’ll be leaving behind a good community of friends, and a girlfriend I really care about,” he says. But, he’ll return to Ashland in 2008 — before the next presidential election.

This story has been posted in the following forums: : Headlines; COS - Morocco; Protest; Speaking Out

This letter is in regards to the article about PCV nominee Derek Volkart. As the writer acknowledged, it doesn't make sense that he would serve the Peace Corps in Morocco and tacitly serve his own country (the USA), that which he (Mr. Volkart) believes is "a fascist government".

Hmm? I am beginning to tire of the many volunteers' rants about this administration (and others). It always struck me as extraordinary that there were and remain so many left-of-center and virulently anti-American vols. This orthodoxy is unsettling. Can't there be several sides represented of this great demographically diverse and widely opinionated nation?

During my service in Cameroon, I believe I was only one of two vols in country that were Republicans (Yes, there are such things!). My Cameroonian colleagues and friends were delighted that I actually voted for George Bush (I). Not that they endorsed him but that they could hear an alternative viewpoint. They knew America had different opinions, they just rarely heard them.

Mr. Volkart might want to be aware that calling the present government fascist is certainly allowed in the USA. But, he might want to exercise political restraint while in Morocco. It will serve no one in country calling the USA fascist while serving the USA & Morocco at the same time. Mr. Volkart you're in for a real learning experience.

Thanks Larry for your input and telling us your opinion.

At least Derek has the guts to speak his mind as a volunteer serving in a "so called" a political organization. Congressmen serve their country everyday and express themselves nearly as harshly as he has. Good for him and his rights to speak and utilize our first ammendment or are you for fascism?

Good for you Derek and good luck with your work.

I am curious as to how Derek Volkart defines the word "fascist". It seems to me that he may not know what he is talking about it. A simple look at the dictionary can verify this.

It has always baffled me why people who do not know how to corectly express themselves get so much notoriety.