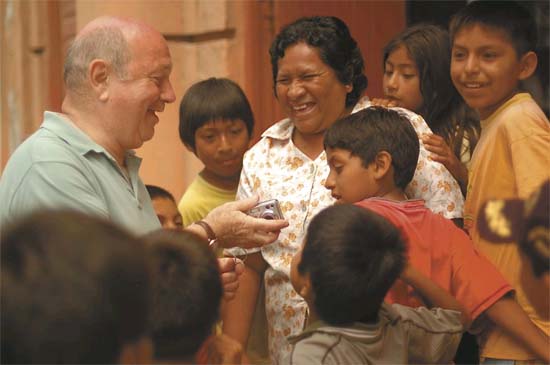 The welcome was immediate and overwhelming from villagers who remembered Alan. Even though the 26-year islander has led his profession as president of the Hilton Head Area Association of Realtors, it's hard to imagine people following the quiet "El Gringo Alan" through the streets like a Pied Piper.

Caption: Alan Coyne is surrounded by residents of San Jose, Peru. The residents liked to see instant images of themselves on his digital camera. Photo: Andy Coyne/Special to the Packet

Thanks to Alan Coyne of Hilton Head Plantation for sharing the story of his recent trip back in time to a poor fishing village in Peru where he served as a Peace Corps volunteer 37 years earlier.

Alan sometimes was invited into the elementary school to share that message and the images of Peru with his children's classmates.

The children always had heard their father say that one day he'd go back to the village. Finally, the oldest child, Andy, said, "Dad, I've heard about it for so many years, it's time to go. Let's go."

Andy brought his wife and three children home from Paris, where he practices law, and they visited Hilton Head last Christmas while father and son traveled to La Caleta de San Jose on the Pacific Coast in northern Peru.

* Photo: Andy Coyne, right, convinced his father, Alan, to revisit the site of his Peace Corps volunteer work 37 years ago.
Special to the Packet
+ Enlarge Image

That's where Alan lived from 1966 to 1968 in a home with no water, plumbing or electricity -- an odd setting for someone who had just graduated from the Fordham University School of Law in Manhattan.

But the Peace Corps had decided that much of the economic development in America in the 19th century could be traced to the cooperative movement in rural areas. They wanted to do the same in developing countries, and they needed lawyers. Alan joined. His job was to set up a financial cooperative, which we might call a credit union, that would be owned by the local fishermen and would help them improve their livelihood by financing boats, motors, nets and perhaps even better ways to market and distribute the fish.

Alan soon learned he was dealing with more than dollars and cents.

He found a culture in which men went out fishing, sold the goods dirt cheap on shore, took the money and went out and got drunk for about a week with wives and babies forlorn at home. When they ran out of money, they'd go back out fishing and the cycle started again.

"These parties were really pitiful," Alan said. Men drank until they passed out, and did it all over again when they came to.

"Basically, what I was doing was encouraging them to set aside some money for tomorrow before they went out to party," Alan said.

By the time he left, the primitive village where the average annual income was $600 had collectively stashed away more than $10,000. That enabled them to borrow $100,000 from the Alliance for Progress initiated by President John F. Kennedy to forge economic development between North America and South America to counter the communist threat from Cuba. With that capital, the villagers had a chance to get ahead.

A funny thing happened as Alan and Andy prepared for their trip to Peru. They discovered that the Peace Corps volunteer in the area today is, like Andy, a graduate of Hilton Head High School. Brent Nicol lived on the island when his father was a doctor here.

The welcome was immediate and overwhelming from villagers who remembered Alan. Even though the 26-year islander has led his profession as president of the Hilton Head Area Association of Realtors, it's hard to imagine people following the quiet "El Gringo Alan" through the streets like a Pied Piper.

One of them chasing the taxi as it rolled into town was the boy -- now in his 40s -- whose curiosity brought him to Alan's hut every day as a child, where he was introduced to Monopoly and a short-wave radio.

Perhaps most touching was Alan's visit with Erasmo, the first man in the village to earn a high school degree. Erasmo literally was starving back in the late 60s because, despite the education, there was no suitable job for him. Erasmo lost a baby while Alan was there, and it showed the young Peace Corps volunteer how tough life can be. The hospital would not release the body until the bill had been paid. Erasmo had no money and they knew it.

"I had to help him build a casket," Alan said. "We dug the grave. We buried the baby."

Erasmo is now employed by the municipality. His home has electricity, running water and even a washing machine. And when Alan and Andy visited for a meal, Alan could not help but notice the two Christmas trees. When Alan lived there, "people were so poor there were never, ever Christmas decorations in the village."

Today, the streets are paved and donkeys have been replaced by motor scooters. People communicate by cell phone. But economic opportunity is still a challenge.

Alan's Hilton Head Sunset Rotary Club has joined with a Rotary Club in Madrid to support an economic initiative by a Peruvian club. It will provide vocational training for artisans in small farming communities in northern Peru to raise the socio-economic level of some 4,000 low-income individuals. To get involved, call Alan at 681-9474.

He sees it as a new way to teach a new generation to fish.

This story has been posted in the following forums: : Headlines; COS - Peru; Return to our Country of Service - Peru