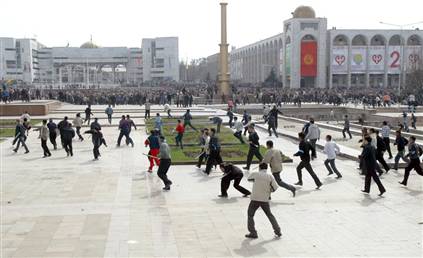 Caption: Government supporters clash with protesters Thursday outside the government headquarters in Bishkek, before the opposition stormed the presidential compound and other government buildings. Photo: Misha Japaridze / AP

A leading opponent of the Akayev regime, Felix Kulov, was freed from prison and praised the “revolution made by the people.” Kulov said Akayev had signed a letter of resignation, the ITAR-Tass news agency reported.

Members of the parliament that was in power before February’s disputed election met Thursday night to discuss keeping order in the nation and conducting a new presidential vote, perhaps as early as May or June.

‘The people ... have taken power’
“It’s not the opposition that has seized power, it’s the people who have taken power. The people. They have been fighting for so long against corruption, against that (Akayev) family,” he said.

The takeover of government buildings in Bishkek followed similar seizures by opposition activists in southern Kyrgyzstan, including the second-largest city, Osh. Those protests began even before the first round of parliamentary elections on Feb. 27 and swelled after March 13 runoffs that the opposition said were seriously flawed. U.S. and European officials concurred.

Another opposition leader, Kurmanbek Bakiyev, appeared on state TV and declared: “Akayev is no longer on the territory of Kyrgyzstan.”

Bakiyev also said the prime minister had resigned but that those in charge of the Security, Interior and Defense ministries were working with the opposition.

President’s whereabouts unclear
The whereabouts of Akayev, who ruled Kyrgyzstan for 15 years, were not clear. The Interfax news agency, without citing sources, said Akayev had flown to Russia but later said he had landed in Kazakhstan.

The takeover began with a rally Thursday morning on the outskirts of Bishkek, where about 5,000 protesters roared and clapped when Bakiyev said Akayev’s foes would soon control the entire country.

“The people of Kyrgyzstan will not let anybody torment them,” he said. “We must show persistence and strength, and we will win.”

Interior Minister Keneshbek Dushebayev addressed the crowd and urged them to obey laws. However, in a departure from his warnings the day before of a possible crackdown that could include “special means and firearms,” he vowed that no force would be used against peaceful protesters.

But the peaceful protest soon became forceful. About 1,000 protesters met little resistance from riot police who were protecting Akayev’s headquarters, a hulking Soviet-era building set well away from the street. The crowd cleared away the helmeted police, who held truncheons and shields, from their positions next to a fence protecting the building.

About half of the crowd entered through the front. Others smashed windows with stones, tossed papers and tore portraits of Akayev in half and stomped on them.

Some of the demonstrators were injured during a clash with a group of truncheon-wielding men in civilian clothes and blue armbands — the color of Akayev’s party. One demonstrator had a serious head injury and a broken leg and another broken ribs, said Iskander Shamshiyev, leader of the opposition Youth Movement of Kyrgyzstan.

This story has been posted in the following forums: : Headlines; COS - Kyrgyzstan; Safety and Security of Volunteers