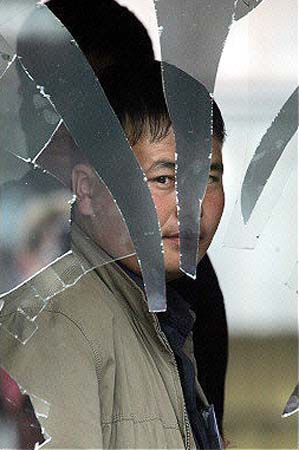 Caption: A man looks through a broken window in downtown Bishkek. Kyrgyzstan's new leaders tightened their grip on power, naming an interim head of state and calling a fresh election, as the nation's ousted ruler denounced what he called a coup d'etat and vowed to return.(AFP/Alexander Nemenov)

NORMAL -- Kyrgyzstan is half a world away from Normal, but Illinois State University officials are watching the political upheaval there with concern because one of their students is there.

"I've gotten word that all the Peace Corps volunteers there are safe. And he's 150 miles away from the capital (Bishkek)," said ISU President Al Bowman.

The participant in the Peace Corps international master's degree program has been in the Central Asian country since September, working to improve farmers' access to supplies.

Askar Akayev, the longtime leader of the former Soviet republic was ousted Thursday, and the abrupt change left Bishkek in chaos.

On Friday, opposition leader and acting President Kurmanbek Bakiyev struggled to quell the violence there.

Kiger was posted to a rural area of the southern Fergana Valley. Associated Press reports say opposition to Akayev has been strong in that region.

Though ISU officials couldn't reach the graduate student through e-mail -- no phone number was available -- they remained confident of his safety.

The student last e-mailed a report about two weeks ago to Frank Beck, the Stevenson Center director.

"He gave no indication there was any trouble," said Beck, who also is an ISU sociology professor.

"We are worried about his well-being, but we're in contact with Peace Corps officials," he said. The Peace Corps told Beck that all volunteers serving in the Kyrgyzstan had been contacted and relocated to designated emergency gathering spots.

In the southern town of Jalal-Abad -- the nearest city to Kiger's assignment -- celebrations erupted Friday. Security was stepped up to avoid the upheaval Bishkek faced.

The southern part of Kyrgyzstan, bordered by Uzbekistan and Tajikistan, is home to ethnic groups from the three former republics, so the prospect of escalating ethnic conflict also looms, Beck said.

Kiger has been enrolled in the center since early 2003. His graduate studies were followed by his two-year assignment in the Central Asian republic.

While there, he's working with the Association of Agribusinessmen of Kyrgyzstan in its work to improve farmers' access to fertilizer, seeds and other supplies.

About 60 students have gone through the center's community and economic development program since it began in 1994. Of the 30 students now enrolled, seven are in foreign countries, including five Peace Corps volunteers, Beck said.

Each Peace Corps program has an emergency plan specific to each country, and volunteers are trained how to respond, according to the federal program's Web site.

In the ISU center's 10-year history, only a handful of students landed in spots that developed trouble. Of those situations, the Peace Corps reassigned two or three students to safer nations, said Beck.

The Associated Press contributed to this report.

This story has been posted in the following forums: : Headlines; COS - Kyrgyzstan; Safety and Security of Volunteers