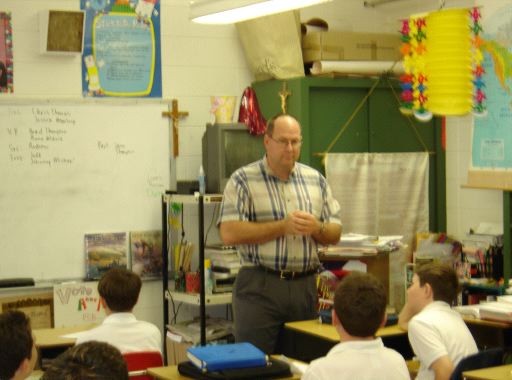 When it came time for the Our Lady of Peace School teacher to present the subject to her middle school pupils, she started looking for other ways to teach it.

"It's got to be easier for this age group," she said.

To augment her classroom teaching, Mrs. Powers sought the help of volunteers from Junior Achievement.

She said she was able to pick a topic from the organization's program that suited the curriculum for her pupils.

"They had a list of subjects. I picked global markets because it fits world history," Mrs. Powers said.

Pupils in other classes at the school had different topics and volunteers, she said. Eighth-graders studied personal finance.

Ted Graser, a manufacturers representative from LatAm in Augusta, spent 10 weeks with the pupils in Mrs. Powers' sixth-grade class.

Working with children through Junior Achievement is a way to "expose kids to ideas," he said.

On Tuesday, he reviewed some of the major topics such as supply and demand, resources and scarcity.

Though the last visit included a lecture format, most of the program has been hands-on.

During many of the sessions, the pupils broke into smaller groups. In one session, they set up a civilization on an uninhabited island called Deserta. Given a set of facts about the physical makeup of the island and its natural resources, they had to decide what type of products they could produce and how to distribute the products.

Started in 1919, Junior Achievement has programs that teach business principles to pupils in elementary through high school.

Mrs. Powers said she's been pleased with the response of her pupils to the program and now is an advocate of it.

"More teachers should use it. It's free. There are more volunteers in Georgia. It fits into Georgia curriculum, but it fits into ours, too," she said.

This story has been posted in the following forums: : Headlines; COS - Uruguay; Junior Achievement; Third Goal