For more than two decades, Nepal RPCV Anthony Sandberg and his partner have run a Berkeley sailing school 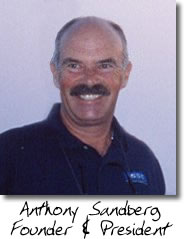 For more than two decades, Nepal RPCV Anthony Sandberg and his partner have run a Berkeley sailing school

BERKELEY: FOR MORE than two decades, Anthony Sandberg and Rich Jepsen have run a Berkeley sailing school that started with one boat, a single telephone and a dream to bring the sport to ordinary enthusiasts, not just the spoiled elite.

It's not surprising that the two have made teaching others to sail their life's work. Both Sandberg, 56, of Berkeley and Jepsen, 49, of Alameda have been sailing since early childhood.

Both love not only the heritage, history and traditions of sailing, but also the connection that sailing has with the Earth's natural elements — wind, water and sun.

But what is remarkable — in the age of so many unsuccessful companies and failed business partnerships — is how the two men with wildly different personalities, management styles and business ideas have kept the largest single-location sailing school in the country afloat for more than 25 years.

"Anthony deserves the credit for recognizing the shared values and the complementary styles," said Jepsen, the chief executive officer of the 10,000-square-foot OCSC sailing school and social club. "He knew who he was when he started the business, and he knew he needed someone to guard the fort."

Sandberg started the school in 1979 using a borrowed boat, one telephone and a small space in the Oakland Estuary.He slept in his van because he was always working. He had grand ideas, the gregarious personality needed to succeed in the people-oriented business, and an athletic background that included skiing for the National Ski Team and sailing at Dartmouth College.

What he didn't have was a partner to help him execute his concepts. He needed someone to help polish the details, train instructors, and work on the administrative nuts and bolts.

He needed Jepsen, who had come to the school as a client after becoming frustrated with the customer service at his previous (now defunct) sailing school and club.

"When he took the charter test he was clearly as good as the instructor who taught the class and I recognized a bright young man who had a passion for the sport," Sandberg said. "We had really different strengths, but we had the same values."

Hard work and sharing their love of sailing are their core values, the men said.

But while their work ethic is similar, their differences are far and wide.

One is a free spirit, the other more conservative.

Jepsen was in the Air Force. Sandberg served a two-year stint in Nepal for the Peace Corps in the 1970s.

Sandberg is single, but has no problem getting women 20 years his junior to join him on sailing trips. Jepsen has been married to the same woman — an engineer — for 16 years.

Jepsen prefers golf and downhill skiing, while Sandberg learns two new adventure sports each year to remind himself what new sailing club members experience and to be outside his comfort zone.

Shark diving, land sailing and open water swimming are among some of his conquests.

Sandberg, rugged and tan, is more comfortable in jeans and a wool sweater. Out on a recent Wednesday night sail, he adeptly played party host, making sure everyone on the "Energy" sailboat had a seat, a life jacket, a Dramamine and a cold drink.

Jepsen, in khaki pants, took the helm of the sailboat, checked the weight balance and the lifelines. As Sandberg introduced people to one another, Jepsen

ensured the sails would rise when they were needed. He checked to make sure the engine was being cooled properly, and that steering and transmission were in working order.

The two work together like an old married couple, sometimes with just a look or a glance. But because they are so different it takes constant "work" to keep the lines of communication open. They have a communications consultant, and recently took acting classes together — in part as a way to develop a stronger relationship.

"We (work) to make sure our interactions are smooth," said Jepsen. "When one person comes up with an idea that is defined as a great possibility and the other sees it as wild," it can take work to find middle ground.

Sandberg calls himself the "ideas guy."

He's the guy who decided to add adventure travel — trips to Turkey and Kenya only loosely linked to sailing — to their book of business.

Among other things, Jepsen is in charge of hiring and training all the instructors who teach at the school. He's a tough sell, accepting just one out of every 20 applicants who apply for jobs.

Their business strengths and passions are as different as their backgrounds. An active sailor since childhood in Hawaii and Lake Tahoe, Sandberg left home at 16, sneaked onto an 80-foot brigantine (he was later hired as crew) and sailed across the Pacific Ocean for three months, he said. Later, he raced sailboats at Dartmouth College, served in the Peace Corps and ran a climbing store and ski resort.

"My whole life has been about getting people outside," Sandberg said.

Jepsen learned to sail at age 5 in Boston Harbor and Massachusetts Bay. While in the Air Force he taught sailing at the Annapolis Sailing School and earned his U.S. Coast Guard license. He also worked as a military radio translator during his four years in the Air Force.

Their combined experiences have benefited OCSC — originally called Olympic Circle Sailing Club. The school offers 25 different courses (with another dozen in the works), the right to charter from the 50-boat fleet, discounts on training, and access to a social network that includes parties, barbecues, lectures and training seminars.

They have about 60 staff members, boats ranging from 24 to 50 feet in length and roughly $2 million in annual revenue, Jepsen said.

Getting everyday folks into the sport is important to both men. To that end, club dues are $59 a month after an initial $600 initiation fee.

"The fact that all these people can be in a space that is just a little bigger than my bathroom, enjoying this Bay Area scenery is just amazing," said Sandberg, relaxing last week on the "Energy," a 341/2-foot sailboat.

Adds Jepsen, "(During the past two decades) I've wanted to change the way people think about sailing ... to think of it as more of a sport than a hobby and more about communing with nature and less about looking good."

This story has been posted in the following forums: : Headlines; COS - Nepal; Sports; Sailing