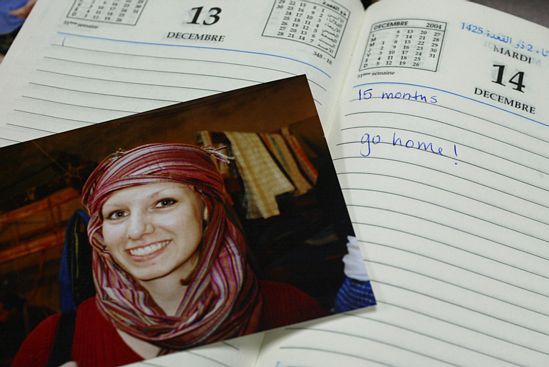 Caption: Melissa Mosvick had marked in her calendar the day she was to leave for home after 15 months as a Peace Corps volunteer in the North African nation of Morocco. She died there last November in a traffic accident, just a short time before she was to come home. Photo: Bruce Bisping Star Tribune

Barbara and Mark Mosvick of Apple Valley will honor and remember their older daughter this Memorial Day as a fallen American hero.

Melissa Mosvick enlisted to go overseas in 2003 to fight terrorism -- not as a soldier but as a Peace Corps volunteer teaching disabled women in Morocco how to use computers to make their lives better.

Her early e-mails home were giddy with discovery and anticipation.

"I think I made the right decision to come here instead of staying in Minnesota," she told her parents on Sept. 15, 2003. "Something just seems really right about being here so far, and I think it will be a really good experience for me."

Melissa, 24, was in her 15th month as a Peace Corps volunteer in the North African nation when she was killed in a traffic accident there last November. A truck collided with the public bus she was riding.

Her parents had just bought tickets for her to fly home for Christmas. In her journal, sent to her family with other personal effects, she had marked the day of departure with enthusiasm -- "Go home!!" -- but Mark Mosvick knew his daughter would be antsy to get back to work.

"She grew up accepting, tolerant of others," he said. "She was always a good listener, and she was absorbing the culture over there like a sponge. She had her moments when she was sad or homesick, but she wanted to do good work for the less fortunate.

"She was there as an ambassador of peace. She wanted to be of service to her country."

Accidents have claimed the largest share, about 70 percent, and the vast majority of deaths occurred in the 1960s, '70s and '80s, she said.

There were two deaths in 2004, including Mosvick, and one this year.

The casualty list represents a tiny fraction of the 178,000 volunteers and trainees who have signed up for two-year stints in 138 countries since 1961.

But those are statistics, "and I don't want her to be any kind of number," Mark Mosvick said of his daughter.

She was buried at Acacia Park Cemetery in Mendota Heights. Barbara Mosvick has ordered fresh flowers for the grave on Memorial Day, but she, Mark and Melissa's younger sister, Kristin, tend to visit separately.

"It's almost too hard, being there together," Mark Mosvick said.

"But there's a pinwheel there we all like," Kristin said, smiling. "When it moves, it's like she's talking to us."

Melissa was fluent in French and rapidly learning Arabic, her mother said, and she had traveled to the storied cities of Fez and Casablanca and provided friends and relatives with running e-commentary on all she saw and experienced.

"She was teaching computer skills to women but didn't feel she was doing enough," Barbara Mosvick said. "So she came up with a business project where the women painted designs on tea glasses and sold them. Melissa applied for a grant to get them started and organized the whole thing."

Some of the women she had worked with sent the Mosvicks a set of tea glasses after Melissa's death. Each glass is painted with her name in English and Arabic.

Kristin said she was reluctant to see her sister leave.

"I was going to college and I wanted her here to motivate me," she said.

"But I told her I wanted her to be happy, and she was. She was becoming more happy by helping others and by learning how she could do without material things."

Melissa wrote humorously about getting water and electricity hooked up in her apartment and other struggles with a strange new bureaucracy.

"It took her three days to set up a bank account, but it really didn't seem to bother her," Barbara Mosvick said. "She told me she was learning patience. She seemed much more calm."

Melissa lived in Ouarzazate, "the door of the desert" and a crossroads between Marrakech and Agadir. "Lawrence of Arabia" was filmed nearby.

She called it Oz.

"The city is absolutely gorgeous," she wrote on Nov. 11, 2002. "It was rebuilt by the French not too long ago so everything seems new and clean.

"The population is 40,000, so it's small enough to get around but big enough where I can escape if I want to. It's in a dry area near mountains and there are oases nearby with lots of palm trees. Very beautiful. I think I will be really happy here."

Chuck Haga is at crhaga@startribune.com.

This story has been posted in the following forums: : Headlines; COS - Morocco; Obituaries

I am a PhD student in Cultural Anthropology at the Univeristy of Florida. In Fall of 2006, I plan to begin dissertation research on the role of the Argan tree in the economic and cultural lives of indigenous women in southern Morocco. I am particularly interested in the cooperatives established for processing Argan seeds.

At the moment, I am studying Arabic at ALIF in Fez. When the program ends on July 15, I plan to travel south in search of a research site and local contacts. Can you provide information on individuals or groups conducting projects related to the environment in Morocco?

Any information or advice would be greatly appreciated.

Really i have just found this page i was looking for the American peace corps adress in Morocco ! really i have been shoked when i have seen Mellisa's piicture really i felt sad cause i have hosted her at home in Rabat really she was a great person i ahev learned many things from her she was such a nice person that i apreciated very much ! i wanted to say that let's put hands in hands and ask GOd to mercy her soul ! so this is my e-mail : naoufal212003@yahoo.com
Naoufal from Morocco Rabat student at the 2nd year English Literature!