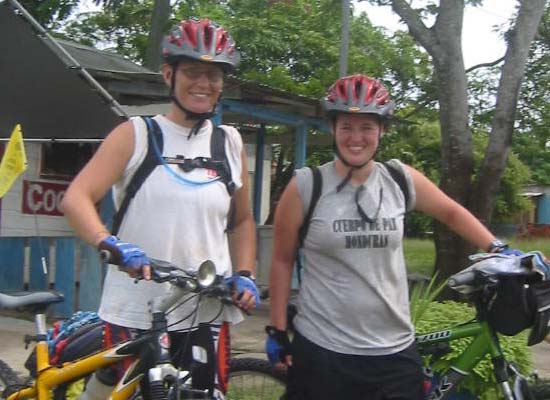 "We had just realized how easy it was to just fly home and how all we had to do was get on a plane or a bus to get on with the trip, so it was really miserable riding," she said. "A lot of times, we were just wrestling [with] whether it was still worth it; whether or not we were still having fun and whether or not it was worth it to achieve our goal." In the end, they decided it was, although at one point they chose to hitchhike about 120 miles to the nearest city.

DURHAM -- Getting to Honduras was a quick two- or three-hour plane flight.

But for Emily Metzloff, getting back took two and a half months.

It's just not as fast on a bike.

Metzloff was in Honduras with the Peace Corps, teaching kids about life skills, health and computers. While she was there, she biked everywhere and realized she liked it.

That ride was a 3,100-mile trip from Honduras to the U.S. -- biking to Guatemala, taking a ferry to Belize, and then biking again when they crossed the border into Mexico.

When she told her parents of her plans, they weren't quite so enthusiastic.

Her father, Tom -- a law professor at Duke -- was especially worried. He'd never been to Mexico, and could think of a million reasons why two women biking through it alone might not be a good idea.

"I guess there's a part of me that kind of hoped it would pass with time, like some ideas people have," he said.

He offered to send Metzloff and her friend backpacking in Europe instead, which he thought might be safer.

"Tom did a number of things to try to encourage them to do something different," said Metzloff's mother, Nancy, who also works for Duke as the executive assistant for the University's executive vice president. "And I just thought, boy, if that's what they wanted to do and if they felt capable of doing it, they ought to do it."

And they did, planning a route that ended in San Diego.

Metzloff and her friend, Sarah Monger, biked about 50 miles a day, working their way up North America toward their destination, with the bulk of the trip in Mexico.

"We went from the littlest, tiniest places that weren't even on the map to huge, huge cities," she said.

They stopped in hotels as they came to cities and towns; where there were none, they camped. Once, when they couldn't find a campsite, they slept in an office at the local police station.

That made biking hard.

"There were some days when we finished just absolutely exhausted," Metzloff said. "Where we were ready to stop but we had a good 20 miles before we would get to a town, so we had no choice but to keep going."

Most of the people the women met along the way were amazed by their trip, Metzloff said.

"They thought it was really neat," she said. "Many people we talked to said that, you know, it was dangerous and couldn't really understand why, but they also had a lot of admiration for what we were doing, too."

People helped them along the way, and they only felt unsafe once or twice, Metzloff said.

At home, Metzloff's parents kept in touch electronically. She could normally get to an Internet café every few days to write e-mails and post to a Web journal where she was writing about her travels. (To see the journal, go to www.crazyguyonabike.com and search for Metzloff.)

Once, they were even able to visit her, spending four days on a beach with Metzloff and Monger as they rested.

"There were times when we were nervous if we hadn't heard from them in a while, but I always felt that they had the wherewithal and the resourcefulness and confidence to negotiate whatever they ran into," Nancy Metzloff said.

The most serious trouble they had was in Baja California, a Mexican state bordering the U.S., Metzloff said.

To get there, they had to take a plane over the Gulf of California. They just missed the boat, and another wouldn't be leaving for days.

Once they arrived, their luck didn't improve.

They were met with constant headwinds that stifled their progress; they could barely move.

The riders were tempted to quit, Metzloff said.

"We had just realized how easy it was to just fly home and how all we had to do was get on a plane or a bus to get on with the trip, so it was really miserable riding," she said. "A lot of times, we were just wrestling [with] whether it was still worth it; whether or not we were still having fun and whether or not it was worth it to achieve our goal."

In the end, they decided it was, although at one point they chose to hitchhike about 120 miles to the nearest city.

The next day, they were back on their bikes.

"I guess that's the thing I'm most proud of," she said. "That's when we most wanted to go home, when it was going to be so easy to get on a plane."

They made it to San Diego.

Now, back in Durham, Metzloff is biking three or four times a week and looking for a job, perhaps as a teacher -- something where she can impact people.

"Eventually, I'd like to have more adventures like that and go do more bike trips, but I'm also excited to be around here, living in one place and having more of an opportunity to be involved," she said.

This story has been posted in the following forums: : Headlines; COS - Honduras; Bicycles; Adventure