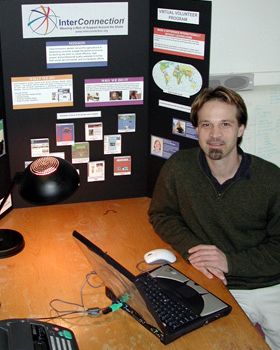 Since March 2003 the center has shipped more than 3,000 computers to 15 countries, from Swaziland to Paraguay; 367 to schools in Iraq in March.

Computers for the world: Here's a man who thinks globally

BY JERRY LARGE
The Seattle Times

Evaporating New Year's resolutions are just one example of a problem lots of us have: Letting great ideas rust. Maybe it would help to hear about someone who doesn't do that.

Charles Brennick, a lanky fellow who looks the part of a Peace Corps volunteer (he was one in Paraguay), has a day job as a planner for Snohomish County.

Brennick was living in Costa Rica in the late `90s doing planning work for a small eco-tourism company. He wound up building a Web site for the company and saw how helpful computer skills would be for small nonprofits, so he started matching computer-savvy volunteers in the United States with organizations around the world that needed Web help.

Volunteers did the work in their spare time over the Internet, and Brennick called the operation InterConnection (www.interconnection.org).

Nonprofit groups were telling him it was great to have a Web site, but they really could use more computers.

So a year-and-a-half ago, he opened the Computer Reuse and Recycling Center in a warehouse shared with a soft drink distributor.

A few months ago I wrote about computer recyclers who were dumping junk in poor countries, and I mentioned that there are businesses you can trust to recycle your old gear, companies that participate in a county program.

Brennick contacted me to say nonprofits are doing right by poorer countries.

Since March 2003 the center has shipped more than 3,000 computers to 15 countries, from Swaziland to Paraguay; 367 to schools in Iraq in March.

Brennick walked me through the Fremont facility one Saturday afternoon.

Computers come in and are checked out by volunteers or staffers. They charge a fee to recycle computers below Pentium II, but newer models that can be reused are accepted for free. Those are the ones that are repaired and upgraded for shipment.

They charge $10 for monitors. They also charge to dispose of printers and scanners because it would cost too much to repair them.

Recycling fees generate money to keep the operation going. The training for volunteers is a side benefit of the main mission of getting computers and technical help to nonprofits in poor countries. And it all helps cut down on electronic waste.

About 10 volunteers a day work at the facility, putting in a few hours when they can.

Volunteers who put in 25 hours earn a computer for themselves.

On the Saturday I visited, there were five people taking apart old computers.

Carolyn Cockle was at the beginners' table trying to open the case of an Apple computer: "This is my first Apple." She comes in on Saturdays because her weekdays are spent looking for a job.

She found out about the center from a city program for people older than 55 who need work. Cockle wants to earn a computer, and she said it feels good knowing her work will help other people.

InterConnection puts up fliers at all Seattle libraries and at other locations where potential volunteers are likely to see them, and it has a grant from the city to provide computers to low-income people.

It helps to have your own computer now that so many jobs are posted on the Internet.

"We don't teach computer use. Lots of programs do that, but we're one of the few that provide hardware," Brennick said.

Another volunteer, Victor, is working under a court order to do community service, so I agreed to use only his first name. He had a negligent driving incident. He works at Microsoft, so working with computers seemed like a good way to discharge his obligation.

He's been doing more complicated work and helping to train novice volunteers. He said he might stay on after he'd completed his sentence, and maybe create a better training program for the center.

Mike Yust is one of the center's first real employees. He was doing some freelance computer work and had some free time last summer. He'd heard something about the program on the radio and decided that rather than wasting time playing video games he'd come down and volunteer.

The weekend I visited, they were working on 200 computers headed to Morocco and preparing another 80 for World Vision in Chile.

Tall stacks of plastic-wrapped computers wait to be shipped out, 700 to 800 of them.

Total Reclaim, a commercial recycler, allows InterConnection to weed through computers waiting to be destroyed and pull out some that are still useable. It takes a little money from Total Reclaim's recycling business, but means a lot to the people who need the technology.

Brennick pointed out a Pentium III computer in the shrink-wrapped stack. People get new machines and think nothing of throwing out a perfectly good and, in this case, not very old machine.

"In the U.S. a new computer is used for about two years nowadays," he said. "Sometimes we get brand-new stuff. People just throw it away."

I can't count the perfectly good resolutions I've made and thrown away. I have to salute Brennick for seeing a problem, thinking up a solution and making it happen. May we all have a new year that fruitful.
Reach Jerry Large at 206-464-3346 or jlarge@seattletimes.com.


When this story was posted in January 2006, this was on the front page of PCOL:

This story has been posted in the following forums: : Headlines; COS - Paraguay; NGO's; Computers; Service