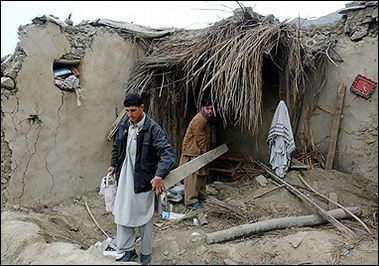 When CIA officers decided this month they had a fix on al-Qaida's No. 2 leader, they also judged there was no way to arrest him. The village where they believed Ayman al-Zawahri was planning a meeting of militants was deep in a rugged, Pashtun tribal homeland where thousands of well-armed men would fight any troops, American or Pakistani, who might enter. Journalist James Rupert, head of Newsday's international bureau in Islamabad, Pakistan began his career abroad as a Peace Corps volunteer, teaching mechanics and welding in Morocco.

A calculated risk in Pakistan

Caption: In this picture taken 18 January Pakistani tribesmen remove the debris of their collapsed house in Damadola. Al-Qaeda's number two Ayman al-Zawahiri said he escaped a controversial US raid targeting him in Damadola, Pakistan, according to a video broadcast on the Arab satellite channel Al-Jazeera.(AFP/File)

ISLAMABAD, Pakistan -- When CIA officers decided this month they had a fix on al-Qaida's No. 2 leader, they also judged there was no way to arrest him. The village where they believed Ayman al-Zawahri was planning a meeting of militants was deep in a rugged, Pashtun tribal homeland where thousands of well-armed men would fight any troops, American or Pakistani, who might enter.

Among CIA and Pakistani intelligence officials, who meet daily here to plan their battle against al-Qaida, "It was certainly known that there would be collateral damage" -- civilian casualties -- "and that it would be politically sensitive" to fire the rockets, said Vince Cannistraro, a former CIA counterterrorism chief in Washington.

But the chance to wipe out al-Qaida's public spokesman and top strategic thinker was too good to miss. On the night of Jan. 13, American missiles roared down on the village of Damadola, pulverizing three homes.

The collateral damage is little known outside Damadola but included sisters Madia, 9, and Sadiqa, 10, among five children and three women who died, villagers said.

Challenges in the frontier

The Damadola attack underscores the uncertainties and brutalities in the war against al-Qaida on Pakistan's frontier with Afghanistan. In 2002 and 2003, Pakistani commandos, shadowed by FBI agents, were able to arrest al-Qaida leaders -- such as Ramzi Binalshibh and Khalid Sheikh Muhammad, both involved in the Sept. 11 plot -- hiding in cities such as Karachi and Rawalpindi.

"The cost of conducting operations in the frontier is much higher than in the cities," said Ayesha Siddiqa, a leading Pakistani defense analyst. In the autonomous, Pashtun border districts, the tribal code obliges any Pashtun man to defend with his life those he has accepted as guests. Also, militant groups allied with al-Qaida are strong.

Bajaur, a tribal district where Damadola is located, borders Afghanistan's Kunar province, one of the centers of the Islamist insurgency against the U.S.-backed Afghan government. Like Kunar, Bajaur is a stronghold of Islamic militants, notably a homegrown group that recruited thousands of young men in 2001 to go fight the Americans in Afghanistan. Most reportedly died in U.S. bombing raids on the Taliban.

As in many places, Bajaur's religious fervor is fed by a struggle for power. The district long was run by tribal chiefs under a princely state that was fully joined to Pakistan only in 1969. Since then, Bajaur's elders have been fighting to regain power they lost to the Pakistani government. They have rallied their tribesmen with the demand that Islamic sharia law, which once nominally applied, be reinstated.

In 1994, Bajaur fought a brief insurgency against the government. Despite its militancy, the district has been fairly quiet in recent years. Although Pakistan has deployed about 70,000 troops along the Afghan border, most are in Waziristan, to the south.

Last year, Pakistani police arrested a prominent al-Qaida coordinator, Abu Farraj Al-Libi, in the city of Mardan. Under interrogation, al-Libi told of having met al-Zawahri in Damadola at the home of an elderly gold merchant, Pakistani and U.S. intelligence analysts said.

In recent weeks, the CIA and its Pakistani counterpart, the Inter-Services Intelligence (ISI) Directorate were alerted to a planned meeting of militants in the borderlands. The CIA got "hard evidence, maybe communications intercepts" that al-Zawahri was to attend, said Cannistraro, now a security consultant in Washington.

The CIA launched some of its Predator drones to watch. Residents in Damadola told a Newsday reporter they saw the planes wandering the skies for about three days before the attacks, and Pakistani analysts speculate the drones may have been what warned Zawahri to stay away.

When the missiles struck, they killed the gold merchant, Bakhtepur Khan, his wife and four of his five children, plus other relatives.

Facing a wave of popular anger, several Pakistani officials accused the United States of having attacked on its own. But Cannistraro and some Pakistanis said the attack had been no surprise to Pakistan.

"The Predators had been over Bajaur for days; Pakistan could see them, and CIA and ISI discuss their operations every day," said a Pakistani analyst, who asked not to be named.

Pakistan's Foreign Ministry summoned U.S. Ambassador Ryan Crocker to receive a formal protest, and the Bush administration maintained a studied silence. "It was a little like a Kabuki dance, but it probably was necessary to protect [Pakistani President Pervez] Musharraf," Cannistraro said.

Still, "As a political issue, it has passed its peak," said Zafar Sheikh, a Pakistani journalist who covers political and security issues. Under a government dominated by Musharraf and the army, "the opposition parties cannot offer a full challenge to the regime; they are part of it, and there is an unwritten understanding" that protest can go only so far, Sheikh said.

Amid the CIA and ISI campaign against al-Qaida, the two governments are trying to hide elements of their cooperation that anger Pakistanis, such as the permission given to the CIA to mount attacks.

"There is no transparent understanding [among Pakistanis] of what is going on," said Siddiqa, the defense analyst. "How is this [joint war on al-Qaida] supposed to work? What are the rules?"

In two similar attacks in November in Waziristan, Pakistan's government claimed the explosions were caused by clumsy al-Qaida militants building bombs. After a Waziristan journalist, Hayatullah Khan, obtained missile fragments and photos as proof of an air attack, he was abducted by armed gunmen and remains missing.

This story has been posted in the following forums: : Headlines; COS - Morocco; Journalism; COS - Pakistan; Terrorism