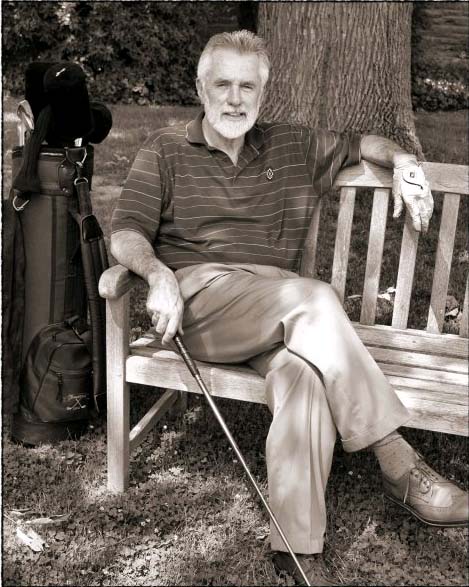 "Let me explain how great a player he was. Hogan served in the Army during the war and was discharged in 1945. In 1949 he had a near-fatal car accident. But in those three and a half years in between, he won thirty-seven tournaments. No player before or since has so dominated the game."

In early July, on one of those lazy Monday afternoons when the course was closed, and having played golf that morning on Caddie Day, I was hanging out at the 1st tee when I heard a car coming down the road from the main gate. Glancing around, I saw a gleaming black Cadillac pull slowly into the empty parking lot. Like all caddies, I knew the members’ cars and this was not one of them.

A woman stepped out from the passenger’s side. I didn’t recognize her, but I saw she wasn’t dressed to play. Then a man got out of the driver’s side and he, too, was dressed in street clothes. I couldn’t make out his face, but I watched as he carefully removed his jacket, as if it meant a great deal to him, and handed it to the woman, who deftly folded it inside out and placed it on the back seat of the Cadillac.

Next he opened the trunk and brought out a flat white linen golf cap. He put it on and instantly I recognized him. His profile was famous from the sports pages, from the Movietone newsreels I had seen at the Towne Theatre, from the dozens of golf magazines I read all summer long in the pro shop. The breath went out of me.

He reached into the trunk of the big car and lifted out his golf bag and swung it onto his shoulder with the ease and sureness of someone who had once been a bag rat himself.

Before the strap touched his shoulder, I was off the bench and charging down the slope. There was no way I was going to let Ben Hogan carry his own golf clubs at the course where I was a caddie.

Can any of you understand how famous Ben Hogan was in 1946? Some of you may have seen Follow the Sun, the movie that was made of his life. I’m told there will be a special showing tomorrow morning. The movie’s not very good, but nevertheless it is the first film ever made about the life of a professional golfer, and that says something about Hogan’s impact on the golf world and beyond.

Let me explain how great a player he was. Hogan served in the Army during the war and was discharged in 1945. In 1949 he had a near-fatal car accident. But in those three and a half years in between, he won thirty-seven tournaments. No player before or since has so dominated the game.

This was the era when woods were made of persimmon, and shafts made of steel. There was no such thing as Big Bertha drivers or graphite irons. No one said a driver had a 460cc titanium head or a 10.5 loft. We couldn’t imagine 11-woods, weight cartridges to control the ball trajectory, or 64 degree lob wedges. Players had names like Sir Walter, Slammin’ Sam, Porky Oliver, and Lighthorse Harry Cooper. Hogan had the most nicknames: Battling Bantam Ben, the Wee Ice Man, The Little Texan, the Century Club Sharpshooter, and, always, the Hawk. The name fit his personality. Unlike, say, Tiger Woods, with his easy smile filling the TV screen, Hogan was silent on the course and distant with fans. He played a brooding, methodical game. Still, the great PGA player Tommy Bolt would say Hogan knew more about golf than any other five pros. Hogan, all the pros would say, played the same game they did, but stood apart from them. I could tell Hogan stories all day, but let me just share just one, told by Jimmy Demaret.

Demaret was leaving Oak Hill in Rochester hours after a round and when he flipped on his car lights, he spotted someone hitting balls on the practice tee. He could tell by the silhouette it was Hogan, so he walked out to the dark tee and asked, “Ben, have you been out here practicing since you played?”

“What the hell are you trying to prove?” said Jimmy. “You shot sixty-four today and birdied ten holes!”

Hogan stared at Demaret, then said with complete conviction, “Jimmy, there’s no reason in the world why a man can’t birdie every hole.”

That was Ben Hogan.

I arrived at the Cadillac at full speed, and tumbled over myself skidding to a stop on the gravel. Valerie Hogan looked startled, then relaxed and smiled shyly. Ben, I recall, turned quickly from the car and froze me with those famous slate-blue eyes.

He was small, not much taller than five-eight, and he weighed less than 140. Back then, people said he resembled the movie star George Raft who played gangsters in the ‘30s and ’40s. With his face half hidden in the shade of his white linen cap, there was something sinister about the man, I’ll admit.

Hogan held me with those fierce eyes and I felt instant panic.

Hogan smiled, the familiar, gap-tooth grin I had seen in photos where he was holding up the winner’s trophy. He swung his bag off his shoulder and gave it to me, asking, “Are you big enough for it, son?” His voice was clear and sharp and although he’d grown up in Forth Worth, there was no trace of a Texan drawl.

I heaved the bag up on my back and staggered some from its weight--or perhaps from the importance of its being Ben Hogan’s. It was the first time I had carried a real player’s bag and every caddie knows what an honor that is.

Hogan reached into the huge trunk and lifted out his gray golf shoes, and continued to talk. “Mrs. Hogan and I were guests as a Western Golf Association dinner last night, and before we leave the Midwest for Texas, I thought I might play a practice round on your course for the Open next month. Is Jimmy around?” He was asking for our home pro, who was also from Fort Worth.

“Do you think he’d mind if I played a few holes?” Hogan slammed the trunk closed and sized me up again with his slate-blue eyes.

This story has been posted in the following forums: : Headlines; COS - Ethiopia; Writing - Ethiopia; Sports; Golf