Review of Cynthia Griggs Fleming (RPCV Liberia), Soon We Will Not Cry: The Liberation of Ruby Doris Smith Robinson 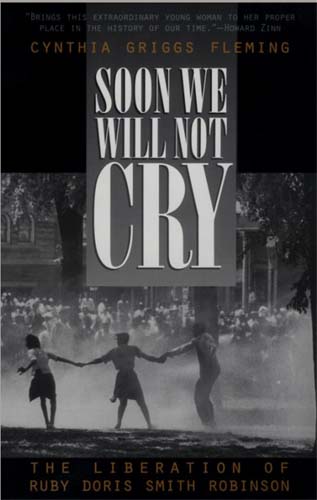 Cynthia Griggs Fleming’s Soon We Will Not Cry: The Liberation of Ruby Doris Smith Robinson, brings much needed attention to the life of an important, yet largely overlooked, activist and organizer in the modern black freedom struggle. Fleming’s book carefully recounts the short but full life of Ruby Doris Smith Robinson, who joined the civil rights movement in 1960 as a young Spelman College coed and who played a critical role in the development and evolution of SNCC, the Student Nonviolent Coordinating Committee, until her death from cancer in 1967. The work relies heavily on oral interviews with Robinson’s family, co-workers, and friends, and thus provides a very personal look into the complex dynamics of gender and race that defined civil rights activism during the early and mid-1960s.

Review of Cynthia Griggs Fleming (RPCV Liberia), Soon We Will Not Cry: The Liberation of Ruby Doris Smith Robinson

Cynthia Griggs Fleming’s Soon We Will Not Cry: The Liberation of Ruby Doris Smith Robinson, brings much needed attention to the life of an important, yet largely overlooked, activist and organizer in the modern black freedom struggle. Fleming’s book carefully recounts the short but full life of Ruby Doris Smith Robinson, who joined the civil rights movement in 1960 as a young Spelman College coed and who played a critical role in the development and evolution of SNCC, the Student Nonviolent Coordinating Committee, until her death from cancer in 1967. The work relies heavily on oral interviews with Robinson’s family, co-workers, and friends, and thus provides a very personal look into the complex dynamics of gender and race that defined civil rights activism during the early and mid-1960s.

Robinson is certainly a worthy subject of study: a courageous activist, she quickly became one of SNCC’s most powerful administrators. Fleming chronicles Robinson’s involvement in early sit-ins, marches and pickets, her willingness to go to jail for her convictions, and her growing administrative responsibilities within SNCC. Through Robinson’s life, the reader gains an understanding of the emotional turmoil that activism entailed (from optimism to determination, and ultimately to frustration), the risks involved in militant action, and the difficulties in running an organization like SNCC, where few people were willing to devote themselves to the unglamourous, but critical, behind- the-scenes work. Fleming notably places Robinson’s story within a wider historical context of African-American urban migration, community-building within Atlanta’s black neighbor- hoods, local and national resistance to racism, and the tradition of black women’s higher education.

It is within this context that the meaning of Robinson’s life takes shape. From Fleming’s perspective, Robinson’s family and community histories inevitably led her to civil rights activism and into SNCC. Like many other blacks in the early twentieth century, Robinson’s mother and father migrated from the rural to the urban South as a way to improve their lives. Atlanta provided educational and economic opportunities that could not be found in the Georgia countryside, and its vibrant and close-knit African American community helped insulate the Smith family from some of the daily humiliations of racism and Jim Crow. Given this background, the Robinson family’s middle-class aspirations—and the emphasis they placed on religious morality, education, and culture (even in the form of much dreaded piano lessons!)—can clearly be interpreted as a form of resistance to racial oppression.[1]

Robinson’s resistance went several steps further, even as it drew upon the traditions that had shaped her life. Despite the virulence of Southern racism, Robinson grew up in an environment that helped produce a self-assured young woman (p.38). Robinson’s sense of confidence and dignity was nurtured by Spelman College’s tradition of creating educated and virtuous women, and at the same time it pushed her into militant action. As Fleming describes it, African American college women of the 1950s and early 1960s faced a modern version of what Evelyn Brooks Higginbotham calls the politics of respectability.[2] But respectability began to take on a different meaning as confident young college women like Robinson risked attack and arrest when they sat-in at lunch counters and marched through the streets. Despite their ’unladylike’ behavior, Fleming persuasively argues that most young female activists did not completely abandon. . .notions of proper black womanhood(p.51). They simply transformed them to suit the movement’s needs.

Fleming’s analysis of this interplay between race, gender, respectability, and activism is one of the books most important contributions. Fleming goes to great pains to describe the many opportunities that black women had for leadership and self-expression within the student movement. SNCC was an organization that clearly gave talented young women like Robinson the room to grow and mature, and standing up for one’s principle’s and beliefs ultimately became the most powerful source of dignity and respect. Fleming’s work also reveals how women like Robinson worried about their hair and personal appearances even as they put their bodies and their freedom on the line. Personal conduct was important, and black women’s adherence to seemingly traditional moral standards may have served as a counter- weight to the radical challenges that these women, and their male cohorts, were making to America’s social and political landscape. Nevertheless, it would be a mistake to characterize these women as quiet and demure. Many became powerful and out- spoken leaders who were known for their courage, tenacity, and no-nonsense approach to social change. And while Robinson had a uniquely influential administrative role within SNCC, she was not the only black woman to wield authority and influence within the freedom struggle.

Power and authority came at a price. As Fleming explains, many black women found it difficult to balance their social lives with their commitment to the movement. Those [women] with leadership responsibilities often felt the need to cultivate a tough assertive image, she writes. Some were convinced that dating a SNCC man could compromise that image and ultimately diminish their effectiveness (p.102). Political commitment always came first, even if it came at the expense of one’s sexual persona. In Robinson’s case, even marriage and motherhood did not allow her to regain her full identity as a woman. People in SNCC, Fleming quotes one former activist as stating, didn’t view [Robinson] as a man or a woman; they viewed her as a strength. Or, in the words of another, I think that everyone accepted her as one of the boys (p.124).

If gender created one set of problems for civil rights activists, race created another—especially for the movement’s black and white female volunteers. Fleming notes how Robinson, in particular, developed a reputation for hating the white women in SNCC. An important and lengthy section of the book deconstructs this myth and analyzes the sexual politics that emerged during the summer of 1964, when large numbers of northern white college students descended upon the South to assist in the Mississippi voter registration campaign. Numerous scholars and historians have pointed to sexual liaisons between white women and black men as the key source of tension between black and white women.[3] Fleming agrees that such tensions existed, but argues that the conflicts were not about political power or spurned romance. Instead, she insists, most of the problems stemmed from cultural differences and racial naivete. Despite their good intentions, many white women did not seem to appreciate the political ramifications of their personal behavior, the psychosexual dynamics of Southern racism, or simply that their mere presence might endanger the movement and the lives of their coworkers(p.137). Black women, on the other hand, found such details impossible to ignore. For Robinson and others, Fleming argues, interracial relationships per se were not the problem, but the chaos and disruption that they generated were.

Fleming’s account of Robinson’s life and career also raises a number of questions about how gender shapes the nature and perception of women’s contributions to grassroots movements for social change. Most studies of women’s activism, in the civil rights movement and beyond, emphasize the difficulties that women faced while working with men.[4] Women’s political priorities were not valued, many argue, or female activists became invisible because they devoted themselves to what sociologist Charles Payne calls the slow respectful work that made the dramatic moments possible.[5]

Ruby Doris Smith Robinson’s life, however, lays bare the myth that women disappeared simply because they were relegated to behind-the-scenes work. If Robinson was known for her administrative skills and commitment to community- based field work, she was also known for her courage and bravery on the front lines of the struggle. Yet, Fleming emphasizes, this militant stance was not enough to save Robinson from historical and political obscurity. Sexism within SNCC may have played a role, although Fleming insists that such attitudes existed but did not dominate the organization. Robinson, herself, may have contributed to her anonymity: she repeatedly shunned personal notoriety and believed that the interests of the movement could be best advanced by dedicated workers who would not allow themselves to be singled out for media attention (p.191). In an ironic twist, just as Robinson’s militant activism made her invisible as a woman, her race and her gender made her invisible as an important political player. Militant women in other movements have shared the same fate. As Fleming’s work suggests, the obstacles to female recognition and acclaim are numerous and complex. No solutions are provided, but the dilemma cannot be overlooked.

Ultimately, this book is a story of triumph, not failure. Fleming portrays Robinson’s life as the source of powerful personal liberation. She had, Fleming writes, defied all of society’s efforts to categorize her and circumscribe her ambitions (p.190). By refusing to define herself according to society’s limited expectations, Robinson created a life fraught with complexities and contradictions (p.193). These complexities were the foundation of Robinson’s life, as well as of this important work.
Notes

[1]. For an exploration into the politics of resistance in everyday life, see Robin Kelley, Race Rebels: Culture, Politics, and the Black Working Class (New York: The Free Press, 1994).

This story has been posted in the following forums: : Headlines; COS - Liberia; University Education; Historiography; Civil Rights; African American Issues