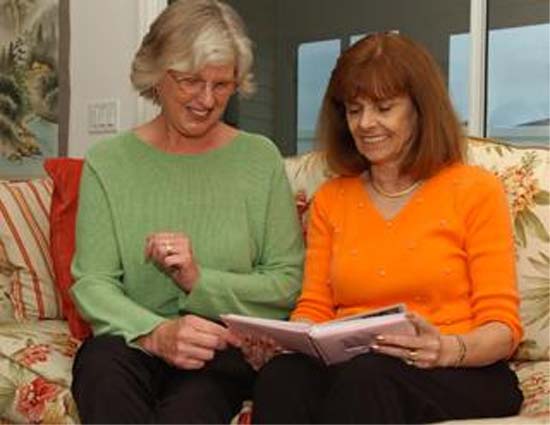 When Rhonda Carrier took the phone from her insurance agent, she never expected her lost friend would be on the other line. Sure enough, her former bridesmaid and Peace Corps roommate, who lives in The Villages and works at Citizens First Wholesale Mortgage, saw Carrier’s name on a loan application. As it turned out, Sheila Larsen, of the Village of Glenbrook, lived only a few minutes’ walk from the Carriers’ temporary home in The Villages.

THE VILLAGES — When Rhonda Carrier took the phone from her insurance agent, she never expected her lost friend would be on the other line.

Sure enough, her former bridesmaid and Peace Corps roommate, who lives in The Villages and works at Citizens First Wholesale Mortgage, saw Carrier’s name on a loan application.

As it turned out, Sheila Larsen, of the Village of Glenbrook, lived only a few minutes’ walk from the Carriers’ temporary home in The Villages.

In 1972, Carrier and Larsen, of the Village of Sabal Chase, had just received their master’s degrees in biology and chemistry, respectively, and being idealistic 20-somethings, they volunteered for the Peace Corps.

First they had to overcome the culture shock.

“When we were in the hotel when we first arrived there, we went to the bathroom to take a shower, and there was no shower stall or anything,” Larsen said. “There’s just a shower head in the wall and a drain in the floor. And I said, ‘Well, the water is going to go everywhere,’ and it did.”

And that was at a hotel.

Elsewhere there were no showers. They bathed by dumping a bucket of water over their heads, soaping up, then dumping more buckets over their bodies until the soap was gone.

They had to wash laundry by hand in cold water.

They couldn’t figure out how to get on the bus.

Since the university was about 15 miles out of Kuala Lumpur, the women took public transportation into the city when they needed to shop or just a bit of city life.

“Initially, pushing your way onto really crowded buses and standing in a crowded bus was so foreign we didn’t know how to do it,” Carrier said.

The crowd would surge and you had to surge with it, she said. The bus driver would hang out the door, Larsen added, yelling for people to hurry up.

The teaching environment was much different from that of the U.S., too.

“When we first went in, one of the shocking things to me was that it would take six months to a year to get scientific journals in because they were coming in by boat,” Carrier said.

During the first three months of Peace Corps, the group spent three months learning the language and two weeks with a Malaysian family that did not speak English. Although universities were making the change from teaching in English to teaching in Malay, the students urged the women otherwise.

“I tried one lecture in Malay,” Carrier said. “I tried it once. Then (the students) sent a delegation up to me at the end of the lecture to please lecture us in English and we’ll translate to everyone.”

All written work was done in both languages, though.

Carrier finished her two-year contract in 1975 and left to travel the world with the new husband she’d met in Malaysia. The couple lived all over the world, including the Philippines, Indonesia, Singapore, Jordan, and now Japan when they’re not in The Villages.

Larsen stayed in the Peace Corps until 1977 and also traveled extensively, though she and her husband stayed in the United States. Amid all their travels, Larsen and Carrier lost touch in the early ’90s until their Villages reunion.

More than 30 years later, Carrier still remembers lessons she learned from the Peace Corps: In training, two Malaysian language teachers were instructed to categorize random objects such as a sock, a comb, a spoon, Carrier said, and the volunteers were supposed to figure out how they were organized.

“If we had done it, we would have metal, glass, paper, plastic,” Carrier said. “We would have done it that way. But they weren’t doing that and none of us could figure out how they were organizing things because it didn’t make any sense. When they were done, they said, ‘By time, of course. How else would you organize something like that? I would use these in the morning, these at noon, I would use these at night.’”

Carrier, who once taught students from all over the world in a school with 47 nationalities, was struck by this observation:

“Somebody will do something that’s totally outside of my frame of reference and I have to stop to say, ‘Is that because I’m experiencing a paper, scissors, rock type of thing and they’re giving me time?’” Carrier said. “Their way of solving the problem may not appear to be the obvious one, but it still solves the problem.”

This story has been posted in the following forums: : Headlines; COS - Malaysia