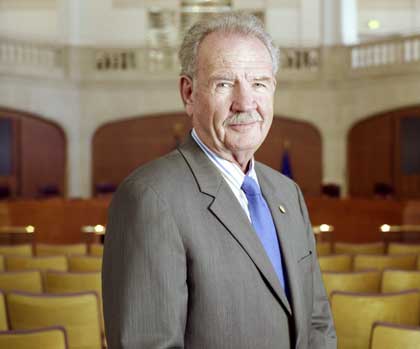 Hardberger won re-election with nearly eight of every 10 ballots cast in the race, pulling in 10 times as many votes as McCurdy, the second-place finisher. At the same time, the five proposals that made the city's record $550 million bond package won vote totals from 69 percent to 78 percent. San Antonio Mayor Phil Hardberger served as a Peace Corps Staff member in the 1960's.

Hardberger ready for a 2nd term

Last week, Mayor Phil Hardberger noticed that yard signs for two of his six challengers in Saturdays' city election — Patrick McCurdy and Eiginio Rodriguez — had cropped up like bad omens.

It shook him a little. He said to his wife, Linda: "You know, we maybe should've done something."

"I really made not a single campaign speech for myself," Hardberger said. "I made many for the bond. In most, I didn't even mention myself. ... I got a little bit worried."

Turned out he had little to worry about. Hardberger won re-election with nearly eight of every 10 ballots cast in the race, pulling in 10 times as many votes as McCurdy, the second-place finisher. At the same time, the five proposals that made the city's record $550 million bond package won vote totals from 69 percent to 78 percent.

Sunday morning, sitting in the spacious living room of his Monte Vista home, with the phone ringing every few minutes, the 72-year-old mayor shied away from saying that voters had handed him a mandate.

"I would say that those vote totals, both for the bonds and myself, were a good ramp or boost going into the next two years," Hardberger said. "We at least know that's the direction the people of San Antonio want to go."

His second term, he said, "has to start with putting those bonds to use." That means beginning to delve into the 151 streets, drainage, parks, library and health-care facility projects that make up the five-year package.

But the most attention-grabbing push of his second term likely will be to relax San Antonio's term limits of two two-year terms for the mayor and City Council.

Voters approved term limits by an overwhelming margin in 1991 and trounced an effort to relax them in 2004.

Hardberger said he wants a reform measure — he prefers two four-year terms and for the change not to apply to the council in place at the time of adoption — to go to voters either next November or in November 2008, a presidential election.

The advantage of the latter would be a bigger turnout, which he said could offset voters dead-set against changing the restrictions and fired up to go to the polls. But he said holding the election next November to reform the City Charter's term-limits provision also has a strong argument in its favor.

"We have a lot of momentum. The city is expressing confidence in itself, through the bonds, through the margin of victory that (voters) gave to me," Hardberger said. "If you're going to change this, you need to have leaders, and those leaders need to have a certain amount of support. We have that."

"When you have good, hard-working people that are intelligent that are looking out for the city's interests, why would you want to turn them out on the street?" he said. "We're losing some very good councilpersons. Richard Perez is a great example."

After a few skirmishes with Perez early in Hardberger's first term, the mayor took on the District 4 councilman as his lieutenant. Perez's departure will leave a major vacancy. Only four of 10 council members are returning next term — Roland Gutierrez, Delicia Herrera, Sheila McNeil and Kevin Wolff — and Hardberger said he's not sure yet which one he'll ask to step in as his point person.

Councilwoman Elena Guajardo was the only incumbent denied a second term, having lost Saturday to attorney Justin Rodriguez.

In early 2006, a Zachry Construction employee sent Guajardo an incendiary e-mail about the Graham Central Station nightclub from his work account. She contacted Zachry officials, who, in turn, fired Dickerson. He later committed suicide.

"She got a lot of criticism on Dickerson, and not so much criticism for being gay — but it was a factor," Hardberger said.

Later, after taking a call from City Manager Sheryl Sculley congratulating him on the bond victory, he cited Guajardo's defeat as another argument against strict term limits.

"For those that the public is tired of or disapproves of, they can get voted out of office."

In addition to Rodriguez, new council members elected Saturday were Mary Alice Cisneros, Philip Cortez and John Clamp. Voters in Districts 5 and 8 will pick their council representatives in June 12 runoffs.

Two measures for which he could seek their support are an education initiative that's in the works and the proposed River Commission, which would monitor all aspects of the River Walk.

"I think it remains to be seen what they'll do as council people and how much they're willing to buy into my team concept," he said. "I do think having run a healthy margin of victory helps you in that. It makes them less likely to want to go off and do their own thing."

A retired chief justice of the 4th Court of Appeals, Hardberger noted that Saturday's was his seventh election and the sixth he'd won. He also said it was, without question, his last.