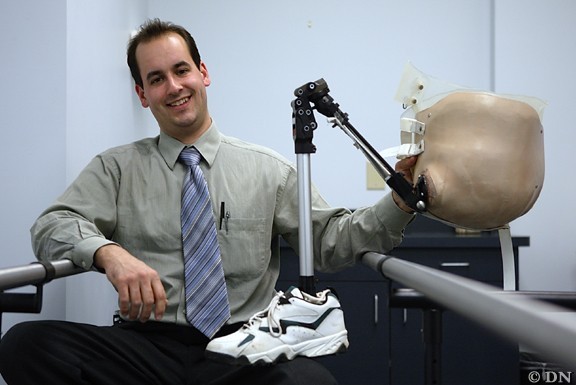 Man uses experience from amputation to help others

Caption: Triumph owner Joseph Frey holds a prosthetic hip that his company made. Frey lost his leg in 1999 while working with machinery. Photo: BRIAN LEHMANN/DN

It was within the first couple weeks on the job at a grain-processing plant. He was walking on a catwalk above an auger, a machine that transports grain by a twisting motion.

The catwalk broke. Frey dropped into the auger, twisting his left leg around in the machine.

“It was agonizing,” Frey said.

His boss went to stop the auger and another coworker tried to help, but the worker was so upset his hands were shaking. Frey’s leg eventually stopped the auger.

Firemen couldn’t figure out how to get him out for two hours. During that time, Frey said he lost half of the blood in his body.

Frey remembers telling the ambulance doctor he didn’t want to lose his leg. He thought he’d be stuck with a wooden prosthesis and hated the idea.

But by January 2004, he not only had a prosthetic leg – though not a wooden one – he also owned his own prosthetics and orthotics company, Triumph.

The University of Nebraska-Lincoln alumnus’ experiences after the accident prompted him to work for a prosthetic company and eventually made him open his own.

Recovering in Madonna Rehabilitation Hospital, the then-UNL student observed a woman with a prosthetic leg. Although she had her leg amputated, she was active and played basketball.

Frey also learned that technology had made many advances in prosthetics.

His leg hadn’t been amputated at the time. But the limb was black with deterioration, and had to be removed. By that time, he realized life wouldn’t be as difficult as he’d thought, he said.

He spent 2½ months at BryanLGH West and Madonna Rehabilitation Hospital.

He dealt with a life-threatening injury, anxiety about the future and constant high fever and pain. Nevertheless, he rarely felt depressed because of the support he received. He had visitors every day.

Doctors and nurses even teased him about his number of visitors.

With their support and a desire to walk again, he was motivated for rehabilitation.

When he left the hospital in November 1999, he was determined to cope with an artificial leg.

He went to back to UNL and finished his bachelor’s degree in agricultural economics in December 2000.

Frey joined the Peace Corps to teach English in Karluk, Russia, in June 2001.

His biggest challenge was overcoming his worries about the trip. He wondered how his prosthesis would limit his activity there.

“I thought I was stupid many times about going to Russia,” he said. As time passed, the anxiety decreased and he enjoyed the experience.

After returning to Lincoln, Frey worked for a prosthetics company.

He found amputated patients don’t have enough care, he said. Getting a false limb is a tough experience, he said, and it’s hard for most people to relate to that.

“Empathy was key,” he said.

He decided to open a prosthetics business by himself. As an employer of four workers, he said unless he’s asleep, he’s thinking about the company.

Rahn, the owner of a blacksmith company in Lincoln, had tried three artificial legs over a 31-year period before he met Frey.

Although the third one was made in 1991 with the best prosthetic technology of the time, he wasn’t happy.

He could only wear it for five to seven hours a day and had to depend mainly on a wheelchair – he was about to give up using prosthetic legs.

Rahn met Frey in the summer of 2004 and was surprised by how smoothly Frey walked.

Frey was an active businessman and knowledgeable about recent prosthetics technology.

Frey’s sincere attitude convinced him to try another one. Rahn talked to Frey for a few months without any pressure to decide.

In January, he got a new prosthetic leg. Before, he didn’t even think he could walk smoothly. Now Rahn enjoys ballroom dancing once a week with his wife – a surprise gift for her.

His old prosthesis gave him back pains, but he hasn’t had problems with the new one.

Rahn said he was lucky to meet Frey.

“Joe is a person who never gives up,” he said.

This story has been posted in the following forums: : Headlines; COS - Russia; Disabilities; Amputation; Prostheitics; Small Business