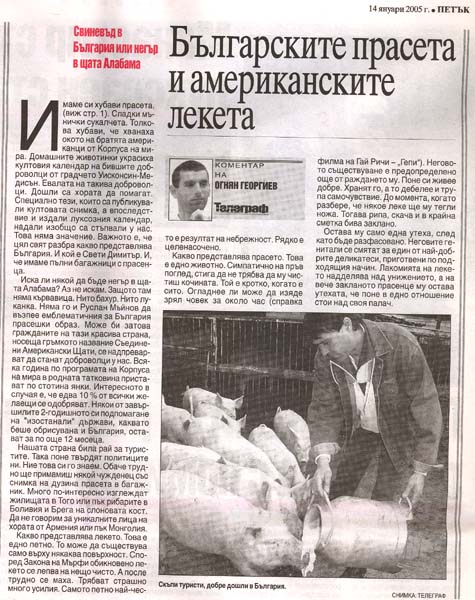 We have nice pigs (see p.1). Sweet small suckling-pigs. So nice that they caught the eye of the American brothers from the Peace Corps. The domestic animals decorated the calendar of the former volunteers from the small town of Wisconsin-Madison. The people came to help. Especially those, who published the cult picture and after that published the luxury calendar, probably have never stepped in our country. This doesn’t matter. The important thing is that the whole World understood what Bulgaria was like. And who St. Dimitar was. And that we have trunks full of piglets.

Does anyone want to be black in the state of Alabama? I do not. Because there is no karvavitsa** there. Nor bahur**. Nor lukanka**.

Ruslan Maynov is not there to praise in song the characteristic of Bulgaria’s piggy image. Maybe that’s why the citizens of this country with the thunderous name The United States of America compete to become volunteers in our country. Each year about a hundred Yankees arrive in our homeland on the Peace Corps program. What’s interesting here is that only 10% of all applicants are approved. Some of those who have completed their 2-year helping of “lumpy” countries, what Bulgaria was also outlined to be, extend their stay for another 12 months.

Our country was a tourist paradise. At least that’s what our politicians say. This we know. But it’s difficult to lure a foreigner with a picture of a dozen of pigs in a trunk. Much more interesting are the houses in Togo or the fishermen in Bolivia and the Ivory Coast. Not to mention the unique faces of the people from Armenia or Mongolia.

What is the stain. That is a blot. It can exist only on some surface. According to Murphy’s Law usually the stain sticks on something clean. And then it’s hard wiping it off. It takes an enormous amount of effort. The stain itself usually is a result of carelessness. It is rarely on purpose.

What is the pig. That is an animal. Likeable at first sight if you don’t have to clean its pigsty. It is calm when it’s fed up. When it gets hungry it can eat a grownup man for about an hour (reference: the Guy Ritchie movie – “Snatch”). (Plamen: not sure about the spelling of the name of the director) Its existence is predetermined from the day it was born. At least it lives well. They feed it, it gets fat and builds up self-confidence. Until the time it finds out that some stain will butcher it. Then it leaps and jumps until it gets slaughtered in the end.

It has only one comfort left after it had been chopped in pieces. Its genitals (Plamen: the author means testicles but uses genitals) are considered as one of the best delicacies, cooked in the proper way. The gluttony of the stain prevails the humiliation and for the already slaughtered pig remains only the comfort that at least in one aspect it has a higher position than its butcher.

* In Bulgarian for “stain” is used the word “leke”. Which means “stain” in Turkish. It is used also as a qualification for a bad person. Someone who is so useless, even a problem for the others like the stain.

**All are some pretending to be typical and considered not so American or European sausages.

This story has been posted in the following forums: : Headlines; COS - Bulgaria; Journalism; Criticism