Letter to the Editor from RPCV Betsy Sergeant Snow about the story "According to American Peace Corps Volunteers: This is Bulgaria." 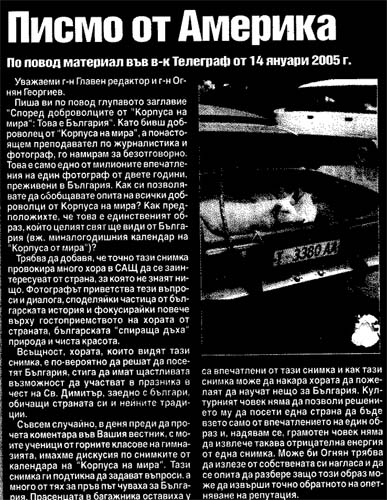 Letter to the Editor from RPCV Betsy Sergeant Snow about the story "According to American Peace Corps Volunteers: This is Bulgaria."

I am writing regarding the inane headline: According to American Peace Corps Volunteers, This is Bulgaria. As a former Peace Corps (PC) volunteer, current journalism teacher, and photographer, I find this irresponsible. This was one of a million impressions from one photographer, from two years spent living in Bulgaria. How dare you assume that this sums up the experience for all Peace Corps Volunteers? How ignorant to suggest this is the only image the entire world will see of Bulgaria. (See last year’s PC calendar).

It is worth noting that this very picture has inspired people in the U.S. to ask about a country of which they know nothing. The photographer welcomes this conversation and dialogue, sharing bits of Bulgaria history, but focusing more on the hospitality of the country's people, its breathtaking countryside and unspoiled beauty. In fact, people who see this photo may consider visiting Bulgaria, if only to be lucky enough to experience a festival in honor of St. Dimitar, with people who are in love with their country and its traditions.

It is somewhat coincidental that my high school students and I, in San Francisco, had just discussed the images in the Peace Corps calendar the day before I read the commentary. This picture led them to ask questions and many of them thought about Bulgaria for the first time ever. The pigs in the trunk left them wondering about a place far away, where very real images take them away from their hurried American supermarkets, pre-packaged foods and fast-paced lives. They asked about life there, the teenagers, the people. Ognian made them wonder why anyone would be so silly to assume that one image could persuade or 'stain' so many minds. If a high school student can see why one face should not represent an entire country, nor that a trunk full of pigs would, why can’t Telegraph?

If there is one stain on Bulgaria, it is the voice of Ognian Georgiev, as he is a published writer, with responsibilities he does not fulfill with this reckless piece. As a published writer, he has the power to show people the real Bulgaria, with stories of triumph or celebrations of the human spirit. But he has chosen to focus on the only possible negative outcome of the world seeing this image. Perhaps Ognian would like to see the over 1000 images this one former peace corps volunteer impresses on people when asked about her experience in Bulgaria Perhaps he has never understood whimsy. Perhaps he would be interested to know how many people are drawn to this image, and how this image might draw people to explore or research Bulgaria. An educated person would not leave their decision to visit or discover a country, to one image, and hopefully an educated person would not draw such negative energy from such a photograph. Perhaps Ognian can step outside of his thoughts for a moment to consider why this image might do the opposite of stain a reputation.

As a teacher of journalism, I expect opinions to be well founded rather than angry and insecure. It is sad to see that yellow journalism pervades all countries, not just the United States. I'm sure this headline, along with my photograph, sold newspapers. I would be interested to know what readers thought of the photograph for themselves, before reading Ognian's ridiculous commentary. Finally, to reprint a copyrighted photograph without permission or credit is, if not illegal in Bulgaria, unethical. Ognian's statements along with the actions of Telegraph are the bigger stain that Bulgaria can hopefully wipe clean.

Teacher/Photographer of “Pigs in the Trunk”

To see more images of Bulgaria according to ONE... visit www.betsysergeant.com/bulgaria.htm

This story has been posted in the following forums: : Headlines; COS - Bulgaria; Journalism; Criticism

As an RPCV from Moldova I loved the photo, it reminded me of life in Eastern Europe. Great reply!