The retired rear admiral, who lived in Aloha, was decorated for his role during the attack on Pearl Harbor

Retired Rear Adm. Francis J. Thomas, a decorated hero of the Japanese attack on Pearl Harbor, died Friday, Jan. 21, 2005. He was 100 and had suffered a stroke two weeks earlier.

An Aloha resident since 2001, Thomas is best known for commanding the battleship USS Nevada's ultimately unsuccessful run for deep water as enemy torpedo bombers tore a hole in the ship's side and set it afire.

For his actions that day, Thomas won the Navy Cross, second only to the Medal of Honor.

On the morning of Dec. 7, 1941, Thomas, then a lieutenant commander, found himself the senior officer aboard the USS Nevada at Pearl Harbor. In a 2002 interview with The Oregonian, Thomas said the ship's other senior officers had gone ashore to their homes in Hawaii. Because his family was in California, he stayed aboard. 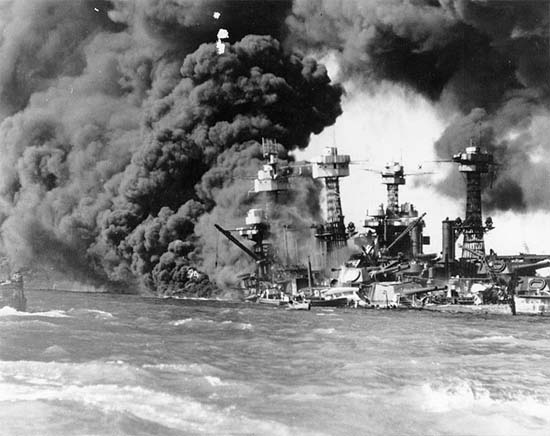 In a twist of fate, Thomas agreed to take charge that day as command duty officer so another lieutenant commander could go to the movies with his family.

At 7:55 a.m., as Thomas ate breakfast and the Nevada's band played "The Star-Spangled Banner," the first bombs hit the ships of the Pacific Fleet. A torpedo ripped a 45-by-30-foot gash in the ship's bow, according to an article on TheHistoryNet, the online service of Primedia History Group, a history-magazine publisher.

As water poured in through the port side, Thomas counterflooded the ship to keep it upright and dispatched firefighting teams.

Running on only two boilers, the 29,000-ton Nevada had enough steam power to back away from the neighboring USS Arizona and make a slow run for the open sea. Japanese dive bombers intensified their attack on the Nevada, hoping to sink it and block the channel to Pearl Harbor. The U.S. battle force commander ordered the Nevada to stay in the harbor, where Thomas steered it into the mud.

"I'm the only officer," he told The Oregonian, "ever to be awarded the Navy Cross for running a ship aground."

During his retirement, Thomas and his wife, the former Elizabeth Schoch, whom he married July 27, 1935, worked for the Peace Corps in Fiji. Thomas taught world history, and his wife taught biology.

Survivors include his sons, Timothy of Kansas City, Mo., Brian of Aloha and Jeffrey of Brooklyn, N.Y.; four grandsons; and two granddaughters. His wife and his daughter, Jennifer, died earlier.

A memorial service will be at 2 p.m. Wednesday, Jan. 26, in Reedville Presbyterian Church in Aloha.

This story has been posted in the following forums: : Headlines; COS - Fiji; US Navy; Pearl Harbor; Heroes; Greatest Generation; World War II

Can anyone tell me what years Admiral Thomas served in Fiji - and, perhaps, where he was posted?