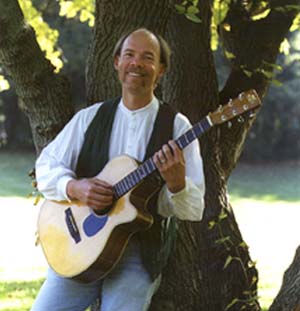 Folk-Singer STEVE SCHUCH Taps into his Roots with TREES OF LIFE
trees of lifeRoots go down, leaves come up

Award-winning folk-singer and multi-instrumentalist STEVE SCHUCH has created an engaging album for children and families. Trees of Life: Songs of Friendship & The Earth not only entertains youngsters, but also encourages them to think more deeply about nature, community and the way our world interconnects.

"The songs were chosen to inspire wonder and spark creativity in children," explains Schuch (pronounced "shook"). The underlying beauty of the lyrics and melodies is something parents appreciate too. Many of the songs are audience favorites from Schuch's 20 years of touring and performing. "People kept asking when I was going to record this album. Well, here it is."

Schuch is uniquely qualified for a project like Trees of Life. A former Audubon naturalist and Peace Corps volunteer, he studied both music and biology at Oberlin College. Schuch also is the founder of the best-selling instrumental group The Night Heron Consort. Both his music and storytelling reflect a great love of nature. In addition to music, Schuch has written two children's books -- The Gift of the Wee Folk (an ancient Irish tale illustrated by Marcia Gardner) and A Symphony of Whales (illustrated by Peter Sylvada and published by Harcourt Brace). Based on the true musical rescue of 3,000 whales, the story received five national book awards. Schuch's accompanying music for violin, orchestra and whales has been performed seven times and featured on National Public Radio's "Performance Today."


In addition to making great family listening, the album works well as a tool for teachers (especially grades K-5). The CD booklet contains song explanations and helpful hints for student participation. Schuch is often hired by schools to conduct concerts and workshops. For four years he taught a course at Antioch New England Graduate School on integrating music into classroom curriculum. "Music and stories are doorways to the imagination. They are a powerful force to develop minds that can remember and think creatively," he says. For more on Schuch's performances, workshops, and "Resources for Parents & Educators," call 1-800-785-9678.

While Schuch has recorded seven previous albums, Trees of Life is his first CD specifically for children. On the album, he plays acoustic guitar, violin, 10-string violin, viola and hand percussion. An all-star cast of studio musicians and children's chorus add variety and depth to the recording. Schuch wrote 11 of the songs, created fresh arrangements for several traditional tunes, and does a new version of Harry Belafonte's "Turn The World Around." The album has received a Parents' Choice Gold Award.

On the surface, Trees of Life is largely about animals and nature. But there are other layers here too. "Ibis the Whale," "The Little Prince," and "Giving Tree" explore the meaning of friendship and growing older. "Silent Huntress" evokes the mysterious beauty of nighttime and owls. The song, "If I Had Wings," introduces the wonder of flight. "The Animal Song" and "Garden Round" are simply a hoot, filled with playful puns and sound-alike words. Schuch, who speaks three languages, introduces multi-cultural themes in lively compositions such as "Two Different Worlds" and "Zeno-ba-ba-da." "Where Will We Go" is sung from the perspective of songbirds migrating from South America to North America (and back). "Sap Time" delves into nature's seasons and taking just enough for your needs (in this case, tapping sap for maple syrup without hurting the tree).

Schuch tapped into his own roots for Trees of Life. Those roots reach all the way back to his childhood when the favorite story his mother read to him was about Wawona, a giant redwood tree with thousands of years of history. Steve grew up on the outskirts of Cincinnati, Ohio, where he roamed through woods and cornfields. One of his favorite teachers kept a five-foot alligator in the classroom, along with a tarantula named "Mr. Softy." Steve's love of nature deepened on camping trips with his father, and summers spent with his grandparents in rural Wisconsin.

At age seven Steve began a lifetime of violin playing. During high school, he played in the Cincinnati Youth Symphony and was concert master of the Interlochen Summer Youth Orchestra. At the same time Schuch began performing professionally with various chamber orchestras and also started composing music.

steve schuchA musical turning point came during Steve's studies at Oberlin College where he first met legendary folk-artist Pete Seeger. "Watching Pete get a crowd singing was a real revelation," remembers Schuch. Hearing Seeger's live renditions of "Abiyoyo" and "The Garden Song" inspired Schuch to begin playing acoustic guitar. At the same time, he started branching out from baroque violin into jazz, Celtic and bluegrass fiddle music. In later years, he would have a chance to perform with Pete Seeger on the sloop "Clearwater," sailing up and down the Hudson River from Albany to New York City. Schuch spent a season on the ship's crew giving concerts and teaching about the ecology of the river. "We'd perform for inner city kids, suburban kids, parents, dockworkers, everyone who was there."

After college, Schuch joined the Peace Corps and went to the Dominican Republic. For two-and-a-half-years he planted trees, worked on soil conservation projects, and taught English in a remote mountain village. “Many evenings a guitar would be passed around. By lantern light, we shared music and stories over cups of ginger-root tea and home-grown coffee. I learned a lot of different melodies and rhythms there, and began writing more of my own music.”

Back home Steve pursued both classical and folk music. He also worked as a naturalist for the Audubon Society at a nature center in New Hampshire. It was during this time that he began writing some of the songs on Trees of Life. He released his first three albums -- Circle of Days, Fields of Summer and Wellspring: Live at the Folkway (the latter with renowned storyteller Odds Bodkin and containing Schuch's popular "Whale Trilogy").

night heron consortSchuch went on to form The Night Heron Consort. Their critically-acclaimed recordings -- Crossing The Waters, A Celtic Celebration Volumes 1 & 2 and The Shores of Lillisand -- are national bestsellers on the North Star label. Schuch composed and performed the soundtracks for several PBS television documentaries including "Birds Without Borders" (on neotropical migratory birds) and "Liveable Landscapes" (concerned with land development issues). Additional credits include composer awards, artist fellowships, five national book awards for A Symphony of Whales, and five fiddling championships.

A versatile performing artist, Schuch divides his time equally between working with children and adult audiences. He tours throughout the U.S. and Europe, performing everywhere from schools and townhalls to classical series, folk festivals and The Kennedy Center.

Schuch is no stranger to unusual venues. "The one winter up in Alaska, I played in several villages above the Arctic Circle. We'd land on these frozen rivers at 50 degrees below zero, with the violin and guitar packed inside mummy sleeping bags to keep them from cracking," he recalls. Other memorable performances include playing on the wind swept summit of Mount Monadnock, inside a tidal sea cave, and serenading a cow as part of an "onomatopoeic" recording of "The Twelve Days of Christmas." *

When not on the road, Steve lives with his wife and various creatures on a farm in New Hampshire. They include two snakes, a freckled cat, and a mess of fantastic pigs.

"Children's minds are so open and receptive, it's a great responsibility what you put in them," says Schuch. "In making Trees of Life, I asked myself what songs would be meaningful on more than one level. Something that speaks across the generations. The answer for me was songs about friendship, the wonder of living things, and how everything on this planet is related."

This story has been posted in the following forums: : Headlines; COS - Dominican Republic; Music