Since he has taken office in 1987, Philippines RPCV Tom Skeldon has been on a crusade to control a booming pit bull trade that he's convinced is linked to gangs and drugs in Toledo 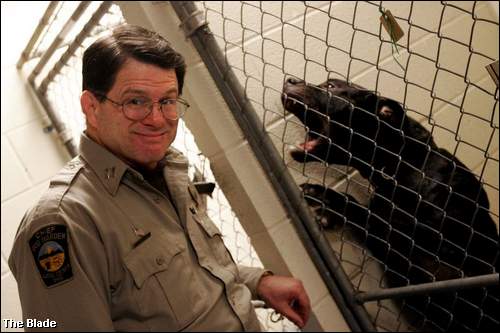 Since he has taken office in 1987, Philippines RPCV Tom Skeldon has been on a crusade to control a booming pit bull trade that he's convinced is linked to gangs and drugs in Toledo

Caption: An agitated pit bull confronts Lucas County Dog Warden Tom Skeldon from its side of an enclosure at the dog pound. Photo: THE BLADE/JEREMY WADSWORTH

Minutes before, Mr. Skeldon fired a tranquilizer dart into a snarling, growling dog that was running loose. He wanted to let the postman know it had been captured.

"Those are the guys that would vote for me. Maybe they'd be the only ones, but they'd vote for me," he said, laughing, as he drove off toward the dog pound.

Mr. Skeldon's not an elected official, so he doesn't have to worry about stumping for votes. That's probably a good thing because he would undoubtedly face heated opposition from pit bull lovers who think he has been too aggressive in rounding up the animals.

Since he has taken office in 1987, he has been on a crusade to control a booming pit bull trade that he's convinced is linked to gangs and drugs in Toledo. In 1993, his office picked up 50 pit bulls. Last year, it captured 857.

Not all pit bulls are dangerous, he said, but the power of their bite and their background as fighting dogs can make them more dangerous than other dogs.

His uncompromising stance on the breed has attracted attention among critics across the country who see him as an anti-pit bull zealot.

Mr. Skeldon, 56, began working with far more exotic animals than dogs early in life. He practically grew up at the Toledo Zoo.

His grandfather, Frank Skeldon, a former business editor and reporter for The Blade, was director of the Toledo Zoo from 1922 until his death in 1948.

The eldest of 11 children, Mr. Skeldon started going to the zoo with his dad at the age of 8 when his mom, Bernadine, wanted to get some of the kids out of the house.

"[My dad] said, 'If you do a good job today, I'll give you a quarter,' " he recalled. "So on the way home that night, my dad says, 'You know, I heard good things about you today, here's your quarter.' I said to my dad, 'Look, I'm going to give you the quarter back if you promise you'll take me with you tomorrow.' "

Mr. Skeldon worked at the zoo every summer after that before he left for college, doing stints in the concession stands and later caring for a baby elephant in the children's zoo.

His involvement with animals would prove to be lifelong.

After being drafted in 1969, Mr. Skeldon joined the U.S. Air Force and was placed in a program where he learned to handle patrol dogs. He put his dog handling to use in Vietnam, where he served one year as a military policeman using sentry dogs to guard the perimeter of a large base at Bien Hoa, north of Saigon.

Mr. Skeldon graduated from Ohio State University, where he majored in animal science, after he returned from the war. Set to follow in his father's footsteps with a career in zoos, he joined the Peace Corps and was sent to the Philippines.

While there, he met his wife, Fanny, and the two came back to America. Soon after, Mr. Skeldon landed a job as a zoo director in Delaware and figured he would move up to larger zoos over the years. But after three years there, he and Fanny felt the pull of the Philippines, so they signed up for another Peace Corps stint.

After two more years in the Peace Corps, he decided to put his dog-training background to use. Along with two brothers, Peter and Barry, he formed a guard dog company that trained dogs for a gold mine and other businesses in the Philippines.

"We had money changers and smugglers that were our customers. You name it," Mr. Skeldon said. "It was wild."

Work is well known
By 1985, though, with the Philippines in turmoil, Mr. Skeldon decided to return to Toledo. Two years later, he was named dog warden after his uncle, Ned Skeldon, the late-Democratic icon and former county commissioner, put in a good word for him.

Over 18 years on the job, Mr. Skeldon's aggressiveness in seizing and euthanizing pit bulls has brought him plenty of negative attention from people opposed to breed-specific legislation.

Glen Bui, vice president of a national canine organization that helped fund a court fight in Toledo Municipal Court against the city's vicious dog law, said people in certain dog circles across the country are concerned about Mr. Skeldon's stance on pit bulls and his tactics. They contend that any dog can be dangerous in the hands of the wrong person and it's not right to focus on pit bulls.

"He's known in other quarters. He's not liked, but he's known," said Mr. Bui, vice president of the American Canine Foundation, which promotes legislation against dog fighting and animal cruelty.

Mr. Bui testified on behalf of a Toledo man who was cited for having two pit bulls and no insurance, which violated the city's vicious dog law.

In August, Judge Francis X. Gorman ruled that the law was constitutional, but said owners could present evidence to show their dogs aren't vicious. The decision is being challenged in the state's 6th District Court of Appeals.

Though the outcome was favorable to Mr. Skeldon's cause, Judge Gorman said he thinks the dog warden has become too focused on pit bulls.

"I think Tom is dedicated and works hard, but he certainly has a narrow view of his job duties," he said. "He sees pit bulls as the prime problem, and I don't know if he addresses everything else."

Toledo Councilman Wilma Brown of District 1 has a different take on Mr. Skeldon. She credits him with helping to make Toledo neighborhoods safer for police officers and children who might have a hard time defending themselves from a pit bull attack.

Spotting pit bulls
"I know that Tom does a good job," she said. "I work with him quite often and he's always been cooperative with me."

Though his cause to control pit bulls has brought him attention, there may be another reason why he's often been in the spotlight: He likes it. Peter and Marty Skeldon, two of his brothers, both said Mr. Skeldon "loves the limelight."

Peter Skeldon, Fulton County's dog warden, likes to tell one story as an example of his brother's fondness for the camera. As Peter tells it, he got a call from Mr. Skeldon to help round up some pit bulls from a suspected dog-fighting operation on Angola Road a few years ago.

When Peter got to the scene, he said the officers "were freaking out" because there were alligators in a pond on the property. Peter said he was surprised his brother wasn't there already, but decided to go round up the alligators by himself.

"I went in and got three alligators out of the pond and had them tied up before Tom showed up," Peter Skeldon said, laughing. "I find out later that he was down the street, and he said, 'let's wait until Pete gets here' because he knew I would catch them. And then he goes on TV and radio and takes all the credit for removing the alligators."

The story never fails to crack up the Skeldon clan, but Mr. Skeldon has a different take on what happened.

He says he helped his brother tape the alligators' mouths shut, but he knows he's fighting a losing battle trying to combat Peter's funnier version.

Mr. Skeldon admits he makes the most of his media contacts, but thinks it has helped him win support for his efforts to control the stray pit bull population.

He said his critics are "emotionally or financially attached" to pit bulls and that some of the humane organizations have been co-opted by the dog-fighting community.

"Some humane groups have been manipulated by these pit bull factions to where they fight breed-specific legislation using scare tactics like 'your breed will be next,' " he said. "And for 13 years, their breed hasn't been next."

This story has been posted in the following forums: : Headlines; COS - Philippines; Dogs; Pit Bulls; Animals

I've thought for a while that even breeding pit bulls is inhumane. Any animal that behaves like many of the pit bulls do when having to interact with unfamiliar animals (including humans) has to be suffering acute distress. Maybe the Society for Prevention of Cruelty to Animals and other humane societies would be interested in this.