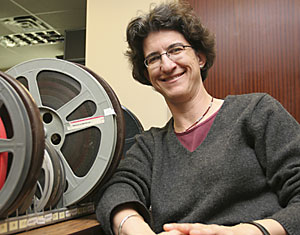 Professor captures Laramie 'Inside Out'

Armed with her past and a video camera, she went to Laramie, Wyo., to find some answers. It was the spring of 1999.

What she found was a town struggling to move forward after the brutal 1998 murder of Matthew Shepard, a gay 21-year-old University of Wyoming student.

Beverly Seckinger has dedicated her career to telling stories about other people through film.

Her latest documentary, "Laramie Inside Out," is a personal journey several years in the making.

It began with Shepard's murder.

"I was hit hard by it," Seckinger said.

Seckinger said she noticed many biographical similarities between herself and Shepard. Like Shepard, Seckinger grew up gay in Laramie and completed her undergraduate degree at the University of Wyoming.

She said she wanted to experience firsthand how different people in Laramie reacted to Shepard's murder, as well as what actions they took in the following months.

Seckinger said she was able to analyze her past in the process of making the film, and she includes scenes from her own life throughout the documentary.

She said she noticed many positive changes in Laramie, and Shepard's death sparked a dialogue among its residents.

"It was a tragic opportunity for a community to grow," Seckinger said.

She said one lesson learned from her experience in making the film is how people can really come together and change the world.

Seckinger has been trying to change the world for a long time.

Born in Los Angeles, Seckinger moved with her family to Laramie when she was in fifth grade.

She majored in English and French at the University of Wyoming, joined the Peace Corps after graduation, and was sent to Morocco to teach English as a second language to high school students.

She returned to the United States to pursue a master's degree in anthropology and linguistics at the UA, and then returned to Morocco where she became involved in the production of a video about literacy studies.

Seckinger said the experience sparked an interest in making films, and she subsequently pursued a master of fine arts degree in radio-television-film at Temple University in Philadelphia.

She joined the media arts faculty at the UA in 1991, where she has shared her expertise with students for more than a decade.

Madonia said documentary filmmaking is a unique way of telling a story, and Seckinger encourages her students to take risks.

"She shaped a lot of my filmmaking and pushed us to do interesting things," said Stephanie Faust, a media arts BFA senior.

Faust said Seckinger is very involved with her students and encourages them to think beyond their natural world.

Ultimately, Seckinger said she hopes people will watch her documentary and realize how individuals and communities can change in a positive direction.

She said people need to create safer and more welcoming schools and communities for everyone.

"I hope people will be inspired to take some kind of action to make a difference," she said.

There will be a screening of "Laramie Inside Out" tonight at 7 in Gallagher Theater, followed by a discussion led by Seckinger. The event is free and open to the public.

This story has been posted in the following forums: : Headlines; COS - Morocco; Filmmaking; Documentaries; Gay Issues