Matt Sesow says he created ōCollateral Damage (Living Hell)ö to shine a light on the grief and pain of war. 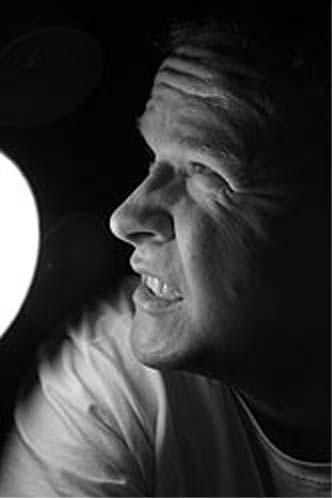 Matt Sesow says he created ōCollateral Damage (Living Hell)ö to shine a light on the grief and pain of war.

Playwrights explore politics through painting, acting
By CHRIS PAGE
Get Out

We interrupt the regularly scheduled coverage of the Michael Jackson trial to bring you the following reminder:

ThereÆs still a war going on.

Sesow, 38, is a former software engineer for IBM who has established himself as a self-taught painter. HeÆs known both for a childhood accident with a landing airplane that resulted in the amputation of an arm and for colorful, powerful abstract paintings that channel the artistÆs inner demons and anger.

Sesow says he created ōCollateral Damage (Living Hell)ö to shine a light on the grief and pain of war.

ōThe idea,ö he says, ōwas a family caught in some bombing campaign.ö
Coffins are lined up in a corner, and severed arms holding scimitars Ś a nod to BaghdadÆs ōHands of Victoryö arches Ś float above. The artistÆs emotions, he says, are on full display in his exploration of death and suffering.

ōI was traveling back from a solo show in Atlanta, and some guy stopped me and asked if I was in the military, if I had just gotten back from Iraq, because IÆm missing an arm and my hair is cut short,ö he says. ōAs a society, we have a lot of feeling for those who are suffering. I want to give a tribute to the troops.ö

The painter says he spent a week working on the large-format ōCollateral Damage,ö and that the 8-by-9-foot painting filled the floor of his cramped studio apartment. Sesow says he accepted the almost pro bono commission (Shurtz paid the cost of materials and for SesowÆs flight to come to opening night of the show; the piece will go on sale for $2,000 after the show closes) because heÆs impressed by the artistic boldness of Shurtz and the participating playwrights.

ōThe historical significance of taking a chance on something like this during a war is pretty ballsy,ö Sesow says. ōSometimes we like to wait to see how things shake out before we form our opinions on them.ö

Shurtz expects audiences anticipating an evening of screaming, ōEmbeddedö-style agitprop will be surprised by the varied tone of the plays presented in ōCollateral Damage.ö

One poignant piece comes from Metro Arts humanities teacher Renee Simms, 38, who juxtaposes a news conference asking Americans to stop donating food to military bomb-sniffing dogs with a scene in which an Iraqi family dog, loose in the city after her home was destroyed, contemplates eating a human corpse.

Other plays explore wartime journalists, soldiers assigned to identify bodies and, in Chuck HinckleyÆs ōChili Cheese Fries,ö a soldier dealing with his first kill Ś his interpreter and guide. Shurtz says bringing the show together has sparked lively debate among cast members, and he hopes discussion continues with audiences. A self-described pacifist, Shurtz says the show has helped him further formulate his own opinions.
ōUsually, when I donÆt know,ö he says, ōIÆll do theater to find out.ö

Story Source: Get Out

This story has been posted in the following forums: : Headlines; COS - Solomon Islands; Art; Painting; Disabilities; Iraq