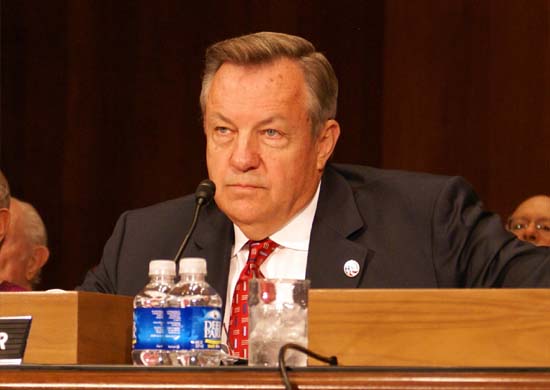 Ron Tschetter is the seventeenth Director of the Peace Corps. He served as a Peace Corps Volunteer in India in the 1960's.

Ronald A. Tschetter (born October 4, 1941 in Huron, South Dakota) is the 17th and current Director of the Peace Corps.
Contents
[hide]

Tschetter earned a bachelor's degree from Bethel University in psychology and social studies.

After college, he and some friends traveled and thumbed around Europe, Syria, Lebanon, Israel and Egypt. He returned home and met and married his wife Nancy. "One day we saw this Peace Corps ad and I said to Nancy, 'We're going to do this work stuff the rest of our lives. Let's go out and see if we can do some good,' " Tschetter says. [1]

Although the couple wanted to serve in Turkey, Iran, or Afghanistan, Tschetter and his wife were assigned to teach family-planning techniques in India beginning in 1966. "We lucked out. India was more different than any of them," says Tschetter. "Wow, what a country."[2] Over the years the Tschetters have returned to India five times to visit their friends.

Tschetter began his career in 1970 as both a retail and institutional investment executive with Blyth Eastman Dillon Union Securities. He joined Dain Rauscher in 1973 as a broker and spent 28 years there primarily in management before he retired.[3]

In 2004 Tschetter was named President of D.A. Davidson & Co., a full-service investment firm based in the Northwest.

Tschetter was confirmed as Director of the Peace Corps by the U.S. Senate on September 13, 2006 and was sworn in on September 26, 2006 becoming the third returned Peace Corps volunteer to serve as director and the first under a Republican Administration. Tschetter had previously served on the National Peace Corps Association board from 1993 to 1999, as board chairman from 1995 to 1998 and as an honorary board member from 2000 to 2003. [4]

During his confirmation hearings Tschetter announced that he would make recruiting older volunteers a priority for the Peace Corps. "I hope to examine the agency’s recruiting process in order to broaden the applicant pool and better tap into the Baby Boom generation-- a rich harvestable field of potential Volunteers."[5]

In April, 2007, the Peace Corps announced the new "50 plus initiative."[1] Under the initiative, older volunteers will be placed in nine test countries: Cameroon, Lesotho and South Africa, along with Ukraine, Romania, Thailand, Jamaica, Dominican Republic and Panama. As part of the program Peace Corps' recruiting messages will be focused on adults 50 and older and publicized through groups such as the AARP and the National Retired Teachers Association., Medical screening, traditionally a lengthy and onerous process for older applicants, will be streamlined, and the transition time from acceptance to placement may be lengthened so older volunteers have more time to deal with personal affairs.[6]

After the disappearance of Peace Corps Volunteer Julia Campbell in the Philippines in April, 2007, Tschetter flew to Manila to meet with Peace Corps Volunteers and government officials to express his support and gather first hand information on the situation. After Campbell's body was recovered, Tschetter met with Philippine President Arroyo to thank the Philippine people and the government for their search efforts. A local citizen was subsequently arrested for Campbell's murder.[7]

On June 14, 2007, the Peace Corps announced its strong disagreement with the decision of Michael Retzer, US Ambassador to Tanzania, to withdraw the authorization for Peace Corps Country Director Christine Djondo to remain in Tanzania and the adverse effects of Retzer's decision on the Peace Corps program in Tanzania including cutting the incoming group of volunteers by half to ensure adequate support. On June 27 Senator Chris Dodd put a hold on the nomination of Mark Green to replace Retzer as Ambassador citing Retzer's action as inteference in the independence of the Peace Corps. Dodd asked that Retzer rescind his cable of no confidence of Djondo or that the State Department provide a written apology to her. On June 28, the State Department provided a written letter of apology to Djondo and Senator Dodd released his hold on Green's nomination allowing it to go forward.[8]

This story has been posted in the following forums: : Headlines; Directors - Tschetter; Figures; Directors; COS - India; Pickens; Wikipedia; Creative Commons