About 10 years ago, Senegal RPCV Tony Ends and his wife, Dela bought a five-acre farm 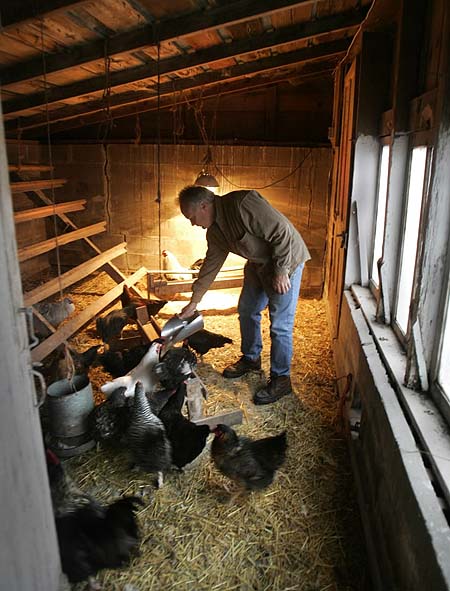 About 10 years ago, Senegal RPCV Tony Ends and his wife, Dela bought a five-acre farm

Farmer with a vision

Caption: Tony Ends, who runs the Churches' Center for Land and People, brings feed to his small flock of chickens last week. At his five-acre farm in the Town of Spring Valley, he raises 40 goats, five sheep, 100 chickens, and - before Thanksgiving - some turkeys. Photo/Dale Guldan

Town of Spring Valley - Tony Ends gazes across his small Wisconsin farm and wishes millions of Midwesterners would look beyond the bounty on their tables when they sit down to feast today.


Think of the struggling farmers, he says, and the more than 1,200 Wisconsin family farms that went out of business each year.

Get to know farmers by buying vegetables, meats, jellies, wool, honey and soap directly from them. Respect and reconnect with the soil - a sacred gift from God.

"The Bible was written to farmers and herdsmen," said Ends, who runs the Churches' Center for Land and People part time. "All of the stories have lessons related to the care of the Earth. It's an environmental handbook."

Ends, 50, is a passionate advocate for family farms, fair prices and sustainable, diversified farming. He is not opposed to large farms, but current, large-scale farming practices "do violence to all of created life," he said.

His main mission with the Churches' Center, which is supported by denominations and religious orders in three states, is to create new markets and relationships between farmers and consumers in Wisconsin, Illinois and Iowa. He gets church groups to host indoor markets in the winter and late fall, so cold or rain will not deter shoppers, and he gets farmers to come.

Ten percent of the proceeds is donated to the Harvest of Hope, an unrelated, ecumenically run church organization that helps struggling farmers.

In the grand scheme of things, Ends is a man with a vision in a changing world.

But some critics accuse him of looking in a rearview mirror that ignores competitive realities and the efficiencies of large-scale, specialized farming with chemical fertilizers, pesticides, herbicides and antibiotics.

In Rock County, where he lives, Ends helped lead a controversial effort that so far has blocked dairy farmer Ed Larson from adding 1,200 animals to his operation in one building. Ends acted as an individual, not on behalf of the Churches' Center, he and a center board member said.

Most of the dairy farmers in the county sided with Larson, with some citing him as a model of good farm management, said Jim Stute, a University of Wisconsin Extension agricultural agent in Rock County. They are also concerned about their own ability to expand, Stute said.

"The livestock industry in Wisconsin, and especially the dairy industry, is changing," Larson said. "I guess some people don't like the change, but I feel that there's room for farms of all sizes. If we're going to keep the cheesemakers, and the local vets, and the feed supply stores happy, we're going to have to keep cows in Wisconsin."

Ends interprets a University of Wisconsin survey as showing that most dairy farmers do not want to expand but feel pushed to by government policies and Extension agents.
Growth of organic farming

Modern practices do not harm the environment when good farm management is used, said Tom Thieding, a Wisconsin Farm Bureau Federation spokesman. There also is a place for the direct marketing of value-added products. Organic farming, especially, has grown tremendously here, he said.

"Wisconsin is the leading state in organic dairy production through the Coulee Region Organic Producer Pool," Thieding said. "They price their product from what the farmer needs and then go to the consumer. It's as much relationship marketing as it is product marketing. There are people that want to know how a product is produced, where, how producers are paid."

Volume commodity farming, in turn, meets the needs of price-sensitive customers, he said.

"There's huge potential for specialty productions," Stute said. "It takes someone that has people skills to deal with farmers markets or the consumer directly. It takes a lot of (time and) work to do that, and it's against the tradition of commodity farming and the farmer's way of thinking."

Stute cited a large Rock County farm, which produces and markets blue corn chips as snack food and organically grows food-grade soybeans for export to Japan for tofu and other products. A farmer in a different county markets meat to homes, stores and restaurants and has a small meat processor butcher 1,000 sheep annually. And a dairy farmer is marketing his own brand of cheese, Stute said.

"Value-added" efforts are nothing new, but they are now such a trend that the Program on Agricultural Technology Studies at the University of Wisconsin-Madison is studying them, said Jeremy Foltz, associate director.

Issues such as obesity, terrorism, mad cow disease and genetic engineering are causing more urban consumers to connect with the environment through food, said Ronald Doetch, executive director of Michael Fields Agricultural Institute in East Troy, where Ends once worked.

Ends views much of this spiritually. An active Episcopalian, Ends was raised a Nazarene, baptized a Lutheran as an adult and has had Muslims and Jews stay in his home.

"I really think food - nurtured with stewardship, tended without exploitation, and transacted with justice - is the only hope for our world," he said.

Ends works on Churches' Center business one day a week in an office at the Sinsinawa Dominican Sisters' motherhouse in southwestern Wisconsin, and at home.

The Churches' Center was founded 15 years ago to support and encourage farmers, said Jerry Folk, a center board member, former executive director of the Wisconsin Council of Churches and an Evangelical Lutheran Church in America minister.

The center raises ethical issues and emphasizes: stewardship of the land, or ecological responsibility; the impact of food production systems on rural communities; the spiritual dimension of food production; and justice, or living wages, for farmers.
Soap made with love

Ends succeeded Sister Miriam Brown as executive director in summer 2003. She worked full time, but the post now is 20 hours a week because of rising costs and reduced support from financially stretched churches. The budget is $44,000, less than half of which is Ends' salary, with the rest for a part-time secretary, rent and expenses, Folk said.

Ends, who spent two years in the Peace Corps in Africa, was a newspaper reporter, section editor and copy editor for 14 years in North and South Carolina and Janesville.

About 10 years ago, Ends and his wife, Dela, 51, bought a five-acre farm on Scotch Hill Road in the Town of Spring Valley, northeast of Brodhead. Three years later, they began to rent additional acreage.

They have 40 goats, five sheep, 100 chickens, and - before Thanksgiving - some turkeys. Four of their five children, including a married daughter, live on the farm.

Ends has a two-year U.S. Department of Agriculture small business innovation research grant to teach 10 farmers how to increase their incomes by producing and marketing soap from goat milk. The project will develop milling equipment to increase soap quality. And it will produce a videotape to train other farmers and to persuade resorts and institutions to buy handcrafted soap from family farmers.

He and his wife grossed about $23,000 in soap sales last year - nearly 30% of their farm's gross income. From a gallon of goat milk worth about $2, they can make up to 80 bars of soap and gross about $240 in sales, not counting production expenses.

Dela and family members use essential oils, flower petals, grains and other ingredients to produce soaps in many colors, shapes and designs.

About 70% of their farm income comes from what is known as community supported agriculture, another agricultural trend. Starting with five families in Janesville 10 years ago, they now contract with 140 families, some as far away as Chicago, to provide up to 20 weeks of produce during the growing season.

"We live in an impersonal world," Dela Ends said. "Everything that we do - our vegetables, raising our animals, making the soap - is done with love. It's done with a part of us in it. You can't buy love from a factory. Everything that goes out of here has been touched by one member of the family, or several."

This story has been posted in the following forums: : Headlines; COS - Senegal; Farming