Public Guardian Patrick Murphy (RPCV Somalia), outspoken and aggressive advocate for children and the elderly, leaves the post he held for 26 years 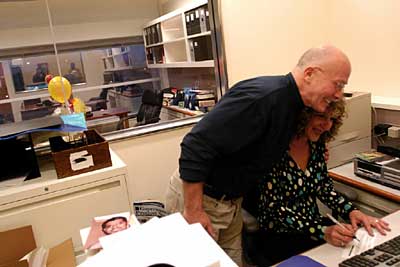 Public Guardian Patrick Murphy (RPCV Somalia), outspoken and aggressive advocate for children and the elderly, leaves the post he held for 26 years

Last day for a county legend
Public Guardian Patrick Murphy, outspoken and aggressive advocate for children and the elderly, leaves the post he held for 26 years

Caption: Public Guardian Patrick Murphy, outspoken and aggressive advocate for children and the elderly, leaves the post he held for 26 years. Murphy visits Tuesday with Antoinette Tronco, his assistant for the last 25 years. (Tribune photo by Jose M. Osorio)

Cook County Public Guardian Patrick Murphy, who has been feared and admired as the embodiment of the office he built, sat at an empty desk Tuesday, his last day on the job.

From that desk, Murphy has changed the course of policy, dragged tragedy into the spotlight, elbowed his way to center stage, alienated state agencies--all in the name of the children he has held so close to him, some of whom he even has taken home for the holidays.

Supporters say he leaves a legacy of protecting children that speaks far louder than his public sound bites. Detractors say his ego, more than altruism, drove him.

Murphy and his attorneys have won $13 million in settlements for abused children, in addition to financial exploitation cases for elderly clients. He battled to increase the number of Juvenile Court judges, a change Murphy said has helped boost adoptions.

Murphy fought for siblings to be placed together in foster homes, arguing that the state child welfare system must stop shuttling wards through homes.

But now, in part because of a potential conflict of interest, he will turn his attention away from children.

"I think I should stay away from juvenile for a while," he said. "It would be healthy for everybody."

Murphy stood in a downtown lobby Tuesday morning. As usual he called his employees "kid," said "you be the man" and hugged them goodbye.

"It's the end of an era," one employee told him.

He sat in his seventh-floor office overlooking the Daley Center.

Murphy began his career in the Cook County state's attorney's office, where he became a criminal prosecutor. He then served in Somalia with the Peace Corps. After returning to Illinois, he took on juvenile cases at a legal aid clinic. After some time in private practice, then-Gov. Jim Thompson asked Murphy to temporarily take over as public guardian. He wound up staying for 26 years.

He has written three books and is working on two more.

Others pointed to Murphy's tendency to advocate for a change in policy following a single tragic incident.

In 1993 Murphy went to the media, blaming caseworkers and state agencies when 3-year-old Joseph Wallace was killed after he was returned to his mentally ill mother, who was a ward of state. Inadvertently, some say, Murphy triggered a panic, causing workers to remove children from birth homes at a record pace.

"He painted with such a broad brush, condemning family preservation in general, and started this stampede to remove every child in sight from their birth parents," Wexler said.

Margaret Berglind, chief executive officer of the Child Care Association of Illinois, said Murphy has said of agencies at odds with him that they did not care about children.

"One of the problems I always have is when you use the tyranny of the anecdote to try to drive policy," Berglind said.

Richard Calica, executive director of the Juvenile Protective Association, said Murphy has been a champion for children but has made a lot of enemies.

"It was hard to know where Patrick stood--whether he was just taking advantage of opportunities as opposed to an actual point of view. He was screaming loudest but he was also involved with the family just as long as everybody else was," Calica said. "He keeps people on their toes even if it isn't the most pleasant of experiences. He'd always say it's not his job to be pleasant."

Others criticized Murphy for spending time in the limelight.

"While many people think that the most dangerous place in Chicago is to stand between Patrick and a microphone, his real legacy is the office that he leaves behind, which I trust will continue to be an irritating thorn in the side of government," said Ron Davidson, a faculty member in the University of Illinois at Chicago's psychiatry department.

Jess McDonald, former director of the Illinois Department of Children and Family Services who has known Murphy for three decades, and others said his style had a strong impact.

"He's a classic example of the adage that public systems do best under bright sunshine. And he brought the sunshine to many respects of the child welfare system," McDonald said. "We might get sunburn on occasion from the exposure, but on the other hand, Patrick's constant, unrelenting attention was absolutely critical to the Illinois system getting better."

Mary Anne Brown, executive director of Hephzibah Children's Association in Oak Park, said, "Sometimes his outrageous, opinionated self is exactly what we've needed to move us forward in child welfare."

Robert Harris, the chief deputy who will take over as public guardian Wednesday, said Murphy will be missed.

This story has been posted in the following forums: : Headlines; COS - Somalia; Law; Child Welfare