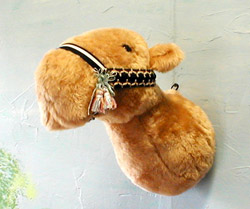 # BRATTLEBORO, Vt., Dec. 1 /PRNewswire/ -- If you ask Howard Shapiro, he will tell you with a prideful twinkle in his eye that "my wife of 38 years is the stubbornest person on earth." At a time when almost all plush products are manufactured abroad, Humane Trophies remains one of the few and possibly only national company that makes all of its line of soft sculpture faux animal trophies, rugs and ottomans in the U.S. According to Howard's wife, Dianne Shapiro, CEO, company founder, and designer of Humane Trophies, "our success, in part, is due to the fact that we are a decorative accessory company that has developed a niche in the home decorating market." Further she states that, "the fact that our designs are handmade and personally signed by each Vermont craftsman involved in producing the product adds a personal touch and increases its perceived value."(Photo: http://www.newscom.com/cgi-bin/prnh/20041201/NEW015 )

The youngest of nine children, Dianne grew-up in rural Tennessee on a working farm with many animals. While in high school she took a mail order taxidermy course. She received a degree in zoology from the University of Tennessee after which she served in the Peace Corps in Africa This gave her the opportunity to observe the local fauna and increase her knowledge of animals.

Dianne's early creative work began in the area of doll making that she learned from her mother in Tennessee. After moving to Vermont in the early 70's she met, Skip Morrow, the author of the "I Hate Cats Book" who invited her to participate in a show at the local library and asked her to design and create a three dimensional soft sculpture hanging moosehead from a sketch he had done. Thus the first Humane Trophy was born to be followed by many other North American and African animals. While most people initially think that the line is for kids, the reality is that Dianne's creations appeal to adult humor and sense of whimsy. To underscore this point, Humane Trophies were featured in an issue of Playboy in the 90's.

In reflecting over the last 25 years, Dianne notes that, "the pressure to take manufacturing off-shore was always there and it became even stronger in the early 90's. But we decided that the integrity of our products was tied to who made them and, as the designer, I felt that I wanted to be personally involved in all aspects of their creation."

Over the years, many fellow manufacturers have asked Dianne why she had not followed their path to offshore production and, at times, it was not easy to respond to them because there were clearly financial sacrifices that went with her insistence to keep it here and continue to employ her crew of Vermont craftsmen. "At times I feel like the mastodon insisting that we can survive the retreat of the ice age glaciers." But she has no regrets for the choosing the path that has allowed her to take pride in every one of her creations that goes out the door of her factory called the Bee Barn on the banks of the Broad Brook in rural Vermont. Even though it has been a challenge to keep such a operation going in this day and age, Shapiro says that, "if I had it to do over again, I wouldn't change a thing."

Humane Trophies is made up of over 130 designs that include North American, safari and barnyard animals. They can be found on line at http://www.humanetrophies.com.

This story has been posted in the following forums: : Headlines; COS - Ethiopia; Business; Art