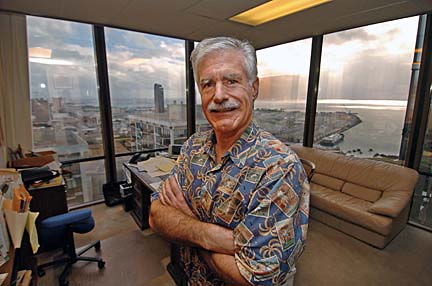 Caption: Richard Turbin, an attorney whose offices are in the Pacific Guardian Center on Bishop Street, wants the Hawaii State Bar Association to take advantage of its position in the Pacific. Photo: DENNIS ODA / DODA@STARBULLETIN.COM

Question: What were some big cases as a public defender?

Answer: Maybe the biggest case was the Karl Kearney murder trial, a guy who was charged with murder of an old lady in Waikiki. That made the news back then.

Also I did "in re: John Doe." It was my case that found the juvenile curfew ordinances unconstitutional.

It was an ordinance that said any kid under the age of 18 who was found outside in the street after 10 p.m. violated the law. It was just a stupid law. It was one of those old-fashioned laws and it was unconstitutionally vague and overbroad.

How could you find a kid a law violator if his mother needs medicine and sends him out to the store after 10 p.m.? What if they have to come home late after basketball practice and band practice? I won that 3-2 and the Hawaii Supreme Court threw the law out as unconstitutional.

A: I think a lot of Hawaii lawyers would just love to do some idealistic work, answer the call to help out the people in the community who can't afford lawyers -- if they're given more of an opportunity.

The HSBA has set up Volunteer Legal Services Hawaii that has set up free law clinics on Saturdays. I think a lot of our members just don't even know about that. I think they would be happy to participate, and we could make those clinics grow and publicize them more and get more people to take advantage of those free clinics and bring them to the neighbor islands. I am certain that there's a desire on the part of most of our bar members to help out communities if they're given the opportunity.

If we got each lawyer to make a $100 contribution a year to Legal Services Hawaii, we could substantially increase our budget. I'd like to do that.

I want to give an award every month to the pro bono lawyer of the month. We have so many lawyers who contribute so much of their time to pro bono work and nobody knows about them. There's not enough publicity about our good work.

An analysis found that Hawaii lawyers contributed 105,270 hours to pro bono work last year. I need to be a cheerleader for the legal profession as a whole. I think if Hawaii's citizens knew how many thousands of hours of free legal work we donate a year, they would feel better about Hawaii's lawyers.

Q: How much pro bono work do you do?

A: I do a lot of free legal work for clients who call me up. I don't take their cases, but I tell them where to go, if they have a viable case, some free legal advice. We'll sometimes do a letter for them. But I've been spending so much of my time doing professional pro bono work -- free time to the bar association, the civil rights commission and other matters -- that I haven't had too much time to do anything else.

A: I'm trying to fast-forward 20 years from now. I predict that 20 years from now a large percentage of Hawaii lawyers will be involved in international work. The economies of the Pacific Rim are absolutely exploding and Hawaii is so well located to play a principle role in the Pacific Rim -- economy, governance, meetings -- that I do believe that if we bring more Pacific Rim lawyers out here ... Hawaii lawyers are going to get a lot more work in the international legal area.

Of course, this is a long-term project. But my plan is to make our annual state bar convention in 2005 an international convention. Our hope is the Tokyo bar association can join with us.

Last year we started the first HSBA trial academy in cooperation with the UH Richardson School of Law. It gives young lawyers the opportunity to do jury trials.

We plan to do that every year and have 50 graduates of our trial academy.

Also we want to work with the new UH School of Medicine to establish a medical school for lawyers and a law school for doctors, so they can network and understand each other better and impart our professional skills to each other.

This story has been posted in the following forums: : Headlines; COS - Samoa; Law