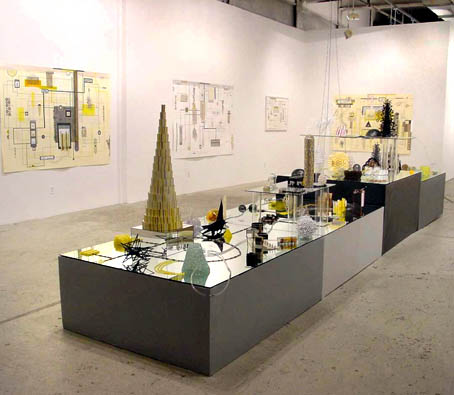 Lost and Found
by Charlie Finch

We visited Dannielle Tegeder in Williamsburg on the occasion of her installation at Priska Juschka Fine Art, which has been extended through December 20.

Dannielle, who draws complex maps of fantasy urban worlds in the spirit of the late architect John Hejduk, comes from a family of steam fitters and is hence known for her meticulous, patient execution. The Judith Rothschild Collection recently purchased three of her monumental maps for its Sterling Drawing Project, which goes into the Museum of Modern Art next year.

"I spent the summer traveling through Mexico," Dannielle told us. "I took Amtrak to the Rio Grande and crossed into the Sierra Madre by bus." 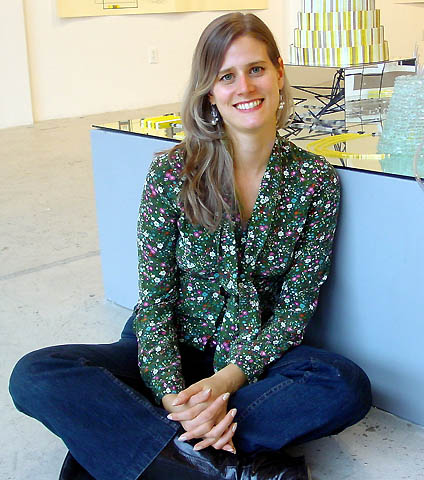 Dannielle used to work in Bangladesh for the Peace Corps and also spent considerable time in Southern Africa. "The Sierra Madre has as wide a variety of dialects as those in certain regions of India and China -- these are Indian patois, pre-Cortez, of course."

A ten-week journey by public transportation culminated in an informal residency at the house of Diego Rivera's grandson in Mexico City.

"There are serious security problems. I had to use pre-arranged codes when meeting associates for the first time, but, nevertheless, Mexico City is culturally vibrant, full of undiscovered contemporary artists working at the highest level," Dannielle continued. "I climbed the pyramids in Southern Mexico twice each and, overall, visited nine Mexican states."

At the time, Dannielle began to fabricate her first dimensional pieces for a large sculpture now on view at Juschka. "I'd create half a dozen or so and then destroy them, because I wasn't satisfied, but eventually I produced 25 or so archetypes."

Dannielle was also inspired to produce a glossary defining each element of her austere empty cities, which will be published next year.

In the past critics have projected catastrophic themes onto Dannielle's imaginary worlds, because they lack figures and breathe desperation and escape, but her imagination is actually driven by constructive hope and rational optimism.

"The titles of my pieces, such as Bamushan (China Mali), arise because I like their sound," Dannielle reflected. "As the specific vision of this exhibition comes from my two year obsession with heavy metal music -- hence the title ‘Death Rock City'."

Arnold Lehman, director of the Brooklyn Museum and the biggest booster of the Brooklyn scene, told us, "I particularly enjoyed Dannielle's first print -- it is the most concise expression of her talents."

This piece, Doxycycloia, which Dannielle made at the Lower East Side Print Shop, comes in an edition of 14 at $2,800 -- each piece includes different hand-drawn elements and makes a perfect holiday present, as they say on TV.

Ultimately, Dannielle's lost-and-found worlds are less the projections of external fears of abandonment, than a whimsical working through of the artist's travels and desires. A dream within a dream, from which anxiety disappears.

This story has been posted in the following forums: : Headlines; COS - Bangladesh; Art; Painting