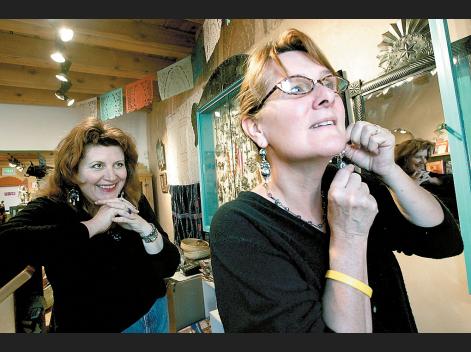 WELCOME TO THE WORLD OF LATIN AMERICAN FOLK ART, ANTIQUES

Tin stars, finger puppets, candles, jewelry, fabric, dolls, chairs, trunks, tables, you name it -- the items at Pachamama, a longtime gift and import store in town, are colorful, fun, affordable and reflect everything the owner believes in.

Martha Egan got her start in the wholesale/retail import business in Albuquerque 30 years ago, when she opened a store with her sister and brother-in-law. "I bought it from them in 1978 then opened my first Santa Fe store in Sena Plaza in 1988," said Egan.

She operated the two stores for about three years, closing the Albuquerque store in the early 1990s. She bought some property on Canyon Road, a house built in 1950. Egan says the place was "just ugly" and it turned into "a remodeling project from hell." But it got done, and today the 1,400-square-foot Santa Fe store is turning into a landmark.

The name of her store comes from Pachamama, an ancient Inca deity that personifies the earth. Many of the items in the store are antiques, and all come from South and Central America or Mexico. Egan has a degree in Latin American history from the University of the Americas in Mexico City. She was also a Peace Corps volunteer in rural Venezuela for two years. As a result, she is well-versed in folk traditions of those cultures.

When she goes on buying trips, Egan likes dealing directly with the artisans. "We get better deals all the way around," she said. "I feel like it's my personal foreign-aid program."

She also assures customers that her antiques are real, not replicas. "There is a lot of dishonesty in the antique business now," Egan said. "A lot of dealers misrepresent things and don't care. People are passing off new silver jewelry as antique."

For awhile Egan gave up traveling because of problems at the border. She shares those experiences in a new novel called Clearing Customs. But she is traveling again and bringing back things people are looking for. Some popular items are saints and crosses from home altars.

"People actually ask if I steal them out of churches. No, I don't steal them. There is a long tradition of home altars in the Latin countries, and that's where I get my things from," she said.

Judy Espinar is a long time customer at Pachamama. "I'm an avid folk-art collector, and I love the low-fire ceramics Martha sells," she says. Espinar owns Clay Angel and collects saints and retablos, both of which Pachamama sells.

"I've been shopping there forever, and the more I shop there, the more addicted I get," Espinar said.

Besides running the store, traveling and buying, and writing books and articles, Egan lectures at museums and cultural organizations in Italy, Mexico and around the states. She has five part-time employees.

"I ran the store by myself for 20 years. Retail is just too hard to do every day," she said. "It stays fresh if you only come in two or three days a week. You're up for the customers then."

This story has been posted in the following forums: : Headlines; COS - Venezuela; Small Business; Business; Imports