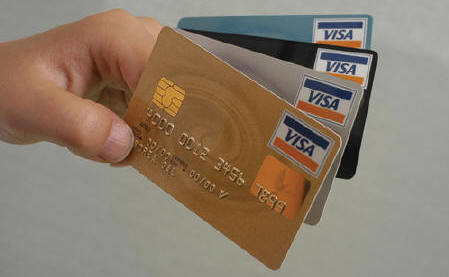 To His Credit, Charge Card King Doesn't Cash In

Walter Cavanagh, a retired financial planner, has the discipline needed to maintain his record-setting collection.

SHELL BEACH, Calif. — When Walter Cavanagh leaves his airy seaside retreat here for a day of Christmas shopping, he'll be accompanied by just one credit card. As usual, his other 1,496 active cards will be locked tight in a safe-deposit box.

At heart, the 61-year-old retired financial planner is a one-card guy. And, unlike the average American household, which carries more than $9,000 in credit card debt at any time, Cavanagh pays off his card (whose lender he would not disclose) in full each and every month.

"What good is putting money in a retirement plan if you're paying 18% interest on a credit card at the same time?" he asks, expecting no good answer as the waves pound outside his home in this upscale enclave north of Pismo Beach.

Yes, Walt the Wary is a fiscal conservative, but he's also a consumer culture icon who has been dubbed "Mr. Plastic Fantastic." For three decades, he has been a fixture in Guinness World Records, which cites him for possessing more active credit cards than anyone else with a will to collect them and a wallet to hold them.

Cavanagh also has the world's largest wallet, according to Guinness. It's a custom-made, 38-pound big boy that can hold credit cards (though a mere 800 of them) in a plastic sleeve that would stretch 30 stories.

Although he has more than 2,000 cards that are duplicates or were issued by businesses that are now defunct, Cavanagh claims access to $1.7 million in instant credit. That means he could fund the Nobel Peace Prize for a year or buy a nice three-bedroom home in Santa Barbara by saying "Charge it!"

But that's simply not the nature of the affable ex-pharmacist, who turned to real estate investments and a tax practice when he got fed up with dispensing pills.

"Never use a card to buy anything you can't pay off in a couple of months," he says. "If you don't have the discipline, you shouldn't have the cards."

At the moment, Cavanagh is spreading an armful of cards across his dining room table. A battered old briefcase is bulging with hundreds more. And he's wearing a trench coat that he can whip open, flasher-style, to reveal, sewn into the lining, credit cards by the dozen.

In the early 1970s, Cavanagh and a buddy in Santa Clara made the kind of bet young men make: The guy who could collect the most credit cards by the end of the year would win dinner.

Fresh from a Peace Corps stint on the Micronesian island of Truk, Cavanagh amassed 143. His friend gathered 138.

"He's still a pharmacist," Cavanagh said. "If only he had worked a little harder."

One thing led to another. At a party, someone said he should send news of his feat to Guinness. Eventually, the British publisher accepted him, but by then, Cavanagh had realized that to keep his title, he would have to keep collecting.

Copying whole pages from a directory of U.S. businesses, he mounted an application blitz and never looked back. The result is the mess of old plastic on Cavanagh's table: oil company cards and bank cards, cards from ice cream places and shoe stores, a sterling silver card from the closed Mapes Hotel in Reno, a card from Harry's shop for big and tall men — though Cavanagh is neither.

An avid golfer and volunteer with local causes, Cavanagh shut his Silicon Valley office and moved to Shell Beach six years ago. But he still has a few clients and even finds time to send for a couple of new cards every month.

Some serious collectors have more, according to Jerry Ballard, a Virginia executive who started what became the 150-member American Credit Card Collectors Society in 1993.

Ballard himself has 7,000 — but, he said, most were in other people's names and no longer valid.

Ballard, 62, has been collecting since a conversation he had with a pal on July 1, 1972. He said he remembered it as vividly as people remember where they were when President Kennedy was assassinated.

"We were driving back from lunch, just coming up to the tracks, and I said, 'Mike, I've got it! Let's start collecting credit cards!' He thought I was nuts."

Today Ballard enthusiastically describes the aesthetics of credit cards, the "trading frenzy" at his group's annual meetings and the search for the collectors' Holy Grail: the 1950 Diners Club issue that marked the start of the modern credit card era.

Ballard has never met Cavanagh. However, he's skeptical that Cavanagh can have nearly 1,500 active cards. He says that companies these days automatically reject applicants whose credit reports indicate a great many cards.

But Cavanagh said that happened to him only once. When he had amassed something like 100 cards on his acquisition streak in the 1970s, he was turned down by J.J. Newberry, a five-and-dime chain now long out of business.

"I was amazed," he said. "I wrote them and told them that I'd gotten cards from Bloomingdale's, from Saks Fifth Avenue, from Neiman Marcus.

"But they wrote me back and told me I had too much credit."

This story has been posted in the following forums: : Headlines; COS - Micronesia; Credit Cards; Humor