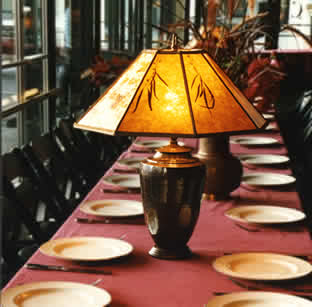 Sue Johnson was in small-claims court one day in a dispute with a customer over a lamp shade he had ordered from her for Christmas but never picked up.

"Well, it is only a lamp shade," the customer protested to the judge, who couldn't help smiling. It turned out the judge owns several of Johnson's lamps. Still, based on the law -- not aesthetics -- the judge ruled in Johnson's favor.

Years later, Johnson chuckled as she recounted the story because every once in a while one of Johnson's artisans will pipe up, "Well, it is only a lamp shade."

Johnson doesn't just sell lamps. She creates them. After 32 years, her shop in Berkeley has become a virtual institution as Johnson and her employees strive to sustain a fading craft -- custom-made lamps and lamp shades.

Over the years, she has provided creative lighting for Chez Panisse, Absinthe and other restaurants and businesses. If you stroll into her shop on Solano Avenue you might bump into Carlos Santana or some other local celebrity searching for a one-of-a-kind lamp. Flip through a Bungalow Book on classic craftsman design and you're likely to see her work in the form of a table light, a floor lamp or a ceiling fixture.

"She is very much a contemporary crafts person who is helping to keep the American arts and crafts movement alive," said Michelle Johnson, a design consultant at the Craftsman Home in Berkeley who is not related to Sue Johnson.

Sue Johnson's store is an eclectic mix of traditional lamps and unusual art pieces adorned with delicate shades. Rows of dragons, turtles, ornate vases and other exquisite pieces are softly lit by 15-watt bulbs, giving the small store a subdued, almost calming feel. Customers have remarked that they feel as though they're entering an art museum instead of a lamp shop.

"We find objects that we like -- usually handcrafted and with some spirit and soul to them -- and we make them into lamps," Johnson said. It may be a carved armadillo made by Seri Indians in Mexico, a Japanese lacquered lunch box, or a rich, red ceramic pot sold at a local gift shop. Once they have the art piece, Johnson and her 10 artisans attach the base, do the wiring, make the shade and top it off with a piece of jewelry or polished stone.

Johnson and her artisans also have a knack for making lamps out of items that people don't know what to do with but can't bear to throw away -- salt and pepper shakers, a baby's shoe, an uncle's boot from the Spanish Civil War, even an engine part from someone's favorite airplane. "They can be turned into something whimsical or something wonderful," Michelle Johnson said.

"I like to see light coming through everything," Sue Johnson said as she gazed at a row of her vast collection. "You get to see the texture that you might have not known was there."

Like many artists, Johnson, 60, develops an emotional attachment with her works, some of which are, frankly, a little odd -- like the copper frog lamp she's had for 10 years. Every year it goes on sale, and every year it goes back up in the attic.

In the fall she has a house-cleaning sale to try to find homes for those lamps that may not be for everyone's taste. Then the store closes for four days while Johnson and her artisans do the final touches in preparation for the grand opening of their new collection.

"I specialize in things so weird that they have no chance of selling," she jokingly said. But when someone spies something they like, "my heart goes pitter-pat."

San Francisco architect Duncan McLeod, who has worked with Johnson on various projects, described her as adaptable, flexible and innovative in her ability to find just the right lighting. "She has a lot of good ideas," he said.

They recently teamed up to work on a Julia Morgan estate that featured a room with a hand-painted wall scene of birds. "She was able to take the silhouette images and incorporate them into the lamps, the ceiling fixtures," he said.

"I've been very lucky," Johnson said. "I have a great staff, and Berkeley and the East Bay environment have really been accepting of what we do."

She credits her parents with instilling in her a love of art and of the outdoors. Johnson grew up in Greensboro, N.C., and began making toys and her own clothes at an early age.

Her father, who worked for the Internal Revenue Service, was very athletic and inspired his daughter to be active in sports. Years later, Johnson never misses an opportunity to indulge in her passions for bird- watching and kayaking. "It sort of revives my soul," she said. "It's hard to be creative when you're not in place where your mind can be free to wander."

Johnson attended Duke University, joined the Peace Corps and, after graduating, went to Liberia for four years. It proved to be a life-changing experience. She taught elementary school there in preparation for a career in teaching, but she also explored her creative side by starting a craft cooperative.

After her return, she earned a master's degree in design from the University of North Carolina. In 1971, she came to California, where she had done her Peace Corps training and discovered, to her dismay, that there was a dearth of teaching jobs. She was reading The Chronicle one day when an ad caught her eye: "Lamp Shade maker/Girl Friday wanted."

"Well, I'm a designer," she thought to herself. The job was at a Lafayette lamp shop and paid $2 an hour. But she learned the craft of making lamp shades from an older woman who also worked at the shop. Jan Merritt was in her 70s at the time, and years before had had her own lamp shade shop across from Gump's in San Francisco.

Johnson left after a year to try to make it on her own. One day she spotted an empty window next to Gersh Photo and approached the owners, who were using it as a color photo lab. They agreed to rent her the window space. For months, she would display her lamps -- made from items she had gleaned from flea markets -- in the windows with a little sign with her phone number on it. Eventually she was able to rent part of the building.

"I wasn't married. I didn't have children, and I wasn't responsible for anything," she said. "I didn't feel nervous about it. I just knew I could do it.

"It wasn't this big business. I was just going to make stuff and sell it."

More than three decades later, she is married and has a stepdaughter and three stepgrandchildren.

Meanwhile, her lamp business has 14,000 customers on its mailing list. She sells about 30 lamps a week at prices that start at $100, and she has a staff that never seems to get bored.

Lynn Duncan, who has been working at the shop for 26 years, has focused in the last few years on finials -- those little pieces of tumbled glass or polished stone that fit on top of the lamp so that the shade doesn't sway back and forth. "I love it," she said as she displayed a box full of the small attachments. "If you get bored, you just figure out something else to do."

The back room of Johnson's store is jammed with stacks of wooden bases, bolts of parchment paper and spools of ribbon and cord. She also has rolls of shade patterns with complex mathematical formulas, proving that it's much more complicated than just folding over a piece of paper.

"I love it. I just love it," Johnson as she stood in front of her store. When people tell her that they buy a lamp from her every year, she said, "I just want to hug them because we're part of a tradition."
Light up

This story has been posted in the following forums: : Headlines; COS - Liberia; Art; Lighting Design