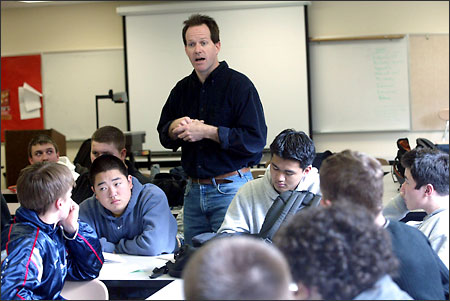 MERCER ISLAND -- "Sometimes things happen in life that force us to ditch what we thought we were going to do and do something else," Mercer Island High School teacher Chris Twombley told his 11th-grade American studies class.

Such a time was yesterday, as many teachers in the Seattle area and across the country abruptly changed their lesson plans in order to discuss the U.S. attack on Iraq with their students.

The attack marks the first brush with war for most American K-12 students, who are too young to remember the Persian Gulf War. Teachers found themselves trying to strike a balance yesterday: broadening classroom discussions, reassuring students, putting war into a context beyond TV images and, in some cases, attempting to keep their own political views in check.

Twombley, an English teacher, postponed consideration of Chaim Potok's novel "My Name Is Asher Lev" and instead asked his students to write down one question about the conflict they wanted answered.

He said his intent was to allow each student to find his or her own voice and to figure out how to get an answer; as the teacher, he said, he was there to fill in some information and act as a moderator.

Twombley, 36, credits his Lebanese grandmother and three years with the Peace Corps in Hungary for broadening his perspective on U.S. foreign policy, particularly in the Mideast. He's critical of the White House justification for the war, and he acknowledged that his contributions to the class discussions are inevitably tinged with his point of view.

But he strives not to impose his ideology, he said.

"It's much more Socratic," he said. "I want to engage them where they are."

Junior Andrew Parker kicked things off with a simple question: "How long?"

The students' discussion freewheeled from there.

"The repercussions of this action may take us further and further than we want it to," said William Levin.

"Were the Iraqis responsible for what happened on Sept. 11?" asked Kevin Smith. "I don't think so."

"If Iraq gets the bright idea that they can push us around, then other rogue states may feel the same, and they'll jump on this bandwagon that will be really hard to stop," said Nick Jakubic.

"I just question, why now?" asked Gabe Godwin. "Why go to this extreme?"

"You make peace with diplomacy -- and I don't feel we have exhausted the diplomatic options," Zoe Davis said.

Here Twombley put in that Davis sounded "almost un-American," that this country was built by go-getters with little patience for negotiation. Elsewhere in the discussion, he told the students that the United States had supported Saddam Hussein in the 1980s, and that the Turks as well as Hussein had oppressed the Kurds.

He paraphrased student points about Bush Sr. and Jr. -- "Maybe the son is finishing what the father started" -- and about pre-empting terrorism: "So you stamp out the fire before it gets too big." And he suggested that democracy may not be as easy to export to the Arab world as a can of tuna.

As the class period wound down and students got ready to go to lunch, Twombley said, "What I hoped to accomplish today was to allow you to hear each other and listen to these perspectives." This crisis, he said, could prove to be a critical moment for the students in defining who they are, and what they think about themselves and their country.

Meanwhile, at schools with large concentrations of children from military families, educators were focused on creating as routine an environment as possible.

Don McPherson, principal of Hillside Elementary on the Fort Lewis Army base -- where all of the 500 students are from military families -- said teachers were not discussing the war in class. About 25 percent of students have parents who are currently deployed, he said.

"We're trying to make it a normal day," he said. "Kids are asking some questions, but what teachers are doing is to address the issues privately with the students. They're trying to keep the focus in classrooms on the curriculum."

The school, located in the Clover Park School District, is starting student support groups next week. In the meantime, McPherson is making sure no televisions at the school are tuned to war coverage.

"Kids are getting enough of that at home," he said. "I'm not sure we should be raising the intensity here at school."

Chris Willits is principal of Hilder Pearson Elementary School in the North Kitsap School District, about half a mile from Naval Undersea Warfare Center Division Keyport and a mile from the Naval Submarine Base Bangor. He said students have been louder, less patient and noticeably more stressed for the past few days, and yesterday was no different.

He said about 100 of the school's 360 students have parents or relatives in the military. The school is continuing to hold support group meetings, he said, and in the next few weeks will bring students together by grade level to talk about their feelings around the war.

At other schools in the region, students expressed a variety of opinions about the war.

Chachi George Hernandez, 18, a senior at a high school called the Truman Center in Federal Way, said he plans to enlist in the U.S. Marines in June in hopes of joining the fight.

"I've always wanted to be that person in the field serving this country," Hernandez said.

Lewis, a senior at Foster High School in Tukwila, described her impression of President Bush's response to all the massive, nationwide anti-war protests.

Charmaine Monk, a 15-year-old sophomore at the Truman Center, has been rallying against Bush's Iraq policy for the last six months. She and several other students walked out of school yesterday to protest the war and traveled to Seattle to join other student protesters.

"Whoever says 'God bless America' and kills kids -- that's bad," Monk said. "No one has the ability to play God."

This story has been posted in the following forums: : Headlines; COS - Hungary; Secondary Education; Iraq